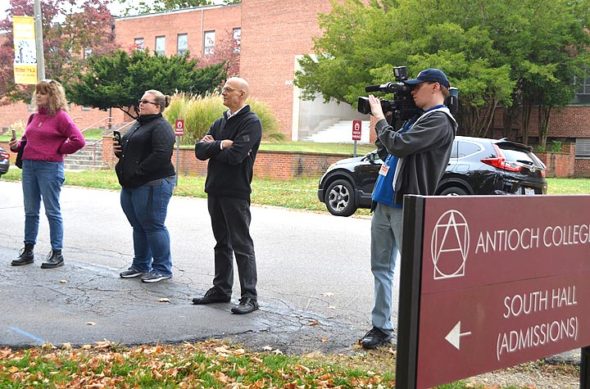 Yellow Springs resident David Nibert and supporters delivered a petition Friday, Oct. 25, calling on Antioch College to spare the lives of lambs in its farm-to-table program. (Photo by Audrey Hackett)

A group campaigning to save the nine lambs that are part of Antioch College’s farm-to-table program delivered a petition to President Tom Manley without incident at 2 p.m. this afternoon, Oct. 25.

Yellow Springs resident David Nibert and four supporters arrived at the front entrance of the Antioch campus on Livermore Street just before 2 p.m. Nibert and two supporters remained at the edge of campus, while two others delivered the petition to the college’s admissions office in South Hall. Television station WRGT Fox 45 of Dayton covered the event.

No other protesters appeared to be present, and the event was concluded peacefully within a few minutes.

Nibert reportedly contacted area news media in advance of Friday regarding the delivery of the petition.

“Risking arrest, a group plans to deliver a petition signed by 84,000 supporters to Antioch College calling on the institution to spare nine lambs from the slaughterhouse,” the WHIO website quotes Nibert’s press release as stating.

Nibert was trespassed from the Antioch campus Oct. 4 following several months of campaigning to prevent the slaughter of the lambs for food. A violation of that trespass could result in arrest by local police, according to Yellow Springs Police Chief Brian Carlson.

A trespass violation did not occur on Friday.

Nibert, a longtime local resident and Wittenberg University professor who identifies as a vegan, has been at odds with Antioch over the fate of the lambs since early June. Animal rights groups, including People for the Ethical Treatment of Animals, or PETA, and In Defense of Animals, have picked up the issue, mobilizing their members and supporters to contact the college. According to an Antioch spokesperson, the college has received thousands of calls and emails on the issue to date, including four death threats.

The petition delivered Friday calls on Manley and the college to spare the lives of the animals, which are slated for slaughter this fall. Nibert first posted the petition on Change.org early in the summer, with over 84,000 signatures gathered since then. The delivered document consisted of 250 pages of signatures and comments, a portion of the total online petition, Nibert said in an interview this afternoon.

Two supporters physically delivered the petition to the admissions office, from which it will be conveyed to President Manley, according to college spokesperson Christine Reedy.

At least five Antioch College security personnel were visible at that part of campus at 2 p.m. Three Yellow Springs police officers were also present in the area, according to Chief Carlson this afternoon.

Nibert had previously sought a permit from the Village of Yellow Springs to hold an event on the northern edge of campus, at the end of President Street. That event did not take place. Nibert cited his uncertainty over whether the Village would waive its insurance requirement as the reason for calling off the event.

Joining Nibert on Friday were supporters Kimberly Frankele and Amanda Murphy of Kettering, Belinda Stoner of Cincinnati and Lynda Hardman of Yellow Springs.

Hardman, a 56-year resident of the village and graduate of Antioch University Midwest, said she opposed Antioch College’s use of the animals for food.

“I don’t feel the school should be normalizing killing animals for food,” she said.

Hardman added that she believed the term “farm-to-table” was misleading.

“I call it farm-to-fable. It’s still killing,” she said.

Asked by the News what the group’s next steps would be, Nibert expressed optimism that the petition would persuade Antioch leaders to spare the lambs.

“We’re just hoping that Antioch will do the right thing,” he said.

Related to the issue, the nonprofit group In Defense of Animals announced last week that it was broadcasting a 30-second television commercial on ABC and FOX through October urging Antioch College to release the lambs to sanctuary. According to a press release from the group, the commercial was produced in honor of a deceased Antioch alumni whose mother has asked the college to spare the lambs in her son’s name.

Antioch College has maintained that it will not alter its plans regarding the animals. An Oct. 15 update to a statement on the issue posted to the college’s website indicates that the FBI Joint Terrorism Task Force is assisting the YSPD with investigations of the death threats against individuals at the college.

Read previous News coverage of the issue from the Oct. 17 edition.