This fall’s race for the Yellow Springs School Board won’t be much of a race at all — both candidates are running unopposed for seats they already hold.

Nevertheless, the two candidates shared with the News in recent interviews their ideas for the school district on a range of topics from the 2018 facilities levy failure to the recent school report cards. 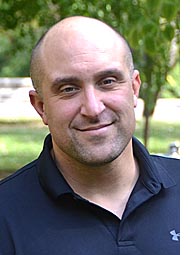 Despite making for an easy campaign, TJ Turner said recently that he was disappointed to find out he was running unopposed for the position.

“Democracy always works better when there are multiple choices,” he said. “It makes the election easy, but it would have been nice to have more ideas out there.”

A materials engineer at Wright Patterson Air Force Base, military reserve officer and published author, Turner currently has three children in the district, including one in each school — Cheyan, in ninth grade at YSHS; Jai in seventh at McKinney and Sierra in fourth at Mills Lawn.

Turner originally came to the area with his wife, Nancy, in 2003, when he was in active duty in the U.S. Air Force. They settled just outside of village limits, but still in the school district.

Turner was appointed to the school board in September 2018 to replace Sean Creighton,  who resigned after moving out of the district.

In spring 2018, Turner was the co-chair of a citizen group that campaigned for a facilities levy, which was rejected by voters by a 2–1 margin.

As a result, Turner wasn’t immediately convinced that he was the right person for the job. When Creighton and then-Board President Merhemic tapped him to join the board upon Creighton’s resignation, Turner told them to “put him on the bottom of the list.”

“With the controversial nature of the levy, I didn’t want to be an obstruction,” Turner said. “I told them I’ll be the back stop.”

Turner added that his role in the campaign group to counter misinformation on social media meant he was the “face of the levy [on social media], for better or for worse.”

But when Merhemic and Creighton persisted, Turner accepted.

Reflecting on the failed levy, Turner conceded that while he got to know a lot about the problems of the school facilities, he “didn’t fully understand the affordability challenges” of villagers.

Turner said he learned from the experience and sees one important board task as finding a way to address the facilities issues, albeit with a new approach.

“Maybe we need to just say ‘here are all of the problems with the schools’ and take a solution off of the table,” he said.

Turner praised the work of the facilities task force, in which he has participated as a board liaison and now a full member. Finding a solution, he believes, will be a “multi-year process.”

“We need to just communicate the issues,” Turner said of the task force’s approach.

In addition to its facilities, Turner listed several other challenges the district faces: the need to develop a new strategic plan — the previous one goes through 2020 — increasing the diversity of the staff, and integrating technology into learning, which, Turner said, must be done well, “because [technology] can be a distraction as well.”

The district must continue to improve  project-based learning, or PBL, Turner added, which many villagers don’t know is combined with traditional teaching. Overall, he sees value in sticking with PBL.

“Everything is team- and project-based in the real world,” said Turner. I would have been so much better prepared if I had some PBL.”

Turner is not opposed to continuing open enrollment, which accounts for more than 25% of the student population, because it “brings in diversity.” And he sees no problem when some district students opt for area STEM schools or art schools, as “there is no one-size-fits-all when it comes to education.”

But perhaps the most significant immediate challenge, Turner said, involves the need to rebuild trust between the board and the community.

“There is definitely a trust gap there, Turner said.

To do so, Turner believes the district should be “as open and transparent as you can be,” but hopes the public considers that due to student privacy laws, some things cannot be shared publicly.

Turner added that “engaging is part of transparency,” as well. So as a board member, he hopes to communicate more regularly with the public about the board’s activities.

As for more engagement with the public during board meetings, he wants villagers to know they can request a public meeting with the board on a topic.

“It’s there you could have more of that dialogue — back and forth — with the board,” Turner explained of such a meeting. “Maybe on other issues we could be using that tool more.”

Despite the recent levy failure, Turner still believes that Yellow Springs values education. He also believes that school board members are not conspiring against the community’s wishes, but have good intentions for improving local education.

“I think we all need to know we are neighbors and we’re all trying to do the right thing,” he said. “We’re not trying to build new schools out of evil intentions. We need to come together and at least start from good intentions.” 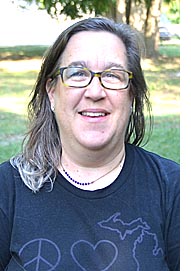 Sylvia Ellison said she chose to run for her third four-year term on the school board in order to provide some stability in a time of change.

“I had considered not running again, but then we had an administrative change,” she said.

“I want us to have a supportive board for a good administration,” Ellison said.

Ellison added that because the new hires are in a “time of learning” and starting to bring their own changes to the district, she believes she could be useful providing “institutional knowledge.”

Ellison is a maternal and child health epidemiologist who, for the last 12 years, has taught in Wright State University’s Masters of Public Health program.

Ellison is married to local realtor Craig Mesure, and the couple has two children who attended Yellow Springs schools; Windom graduated in 2017, and Harper completed his high school requirements last spring and continues to attend the Greene County Career Center.

Asked about her role on the board, Ellison said she has tried to be measured and thoughtful in her approach and “pays attention to details.”

“I ask questions and let people do their jobs — unless they’re not; then I say something,” Ellison said.

On facilities issues, Ellison said that she stands by the board’s decision to let the Facilities Task Force decide the best way to address facilities.

“The board is not going to interject,” Ellison said. “We are waiting for [that process] to culminate.”

One reason for that approach, Ellison explained, was because of the community’s perception that the board “drove the [levy] without input from the community.”

Looking ahead, Ellison believes that public input is essential to a successful outcome of the facilities challenges.

“Nothing can be done without the community in the end,” she said.

But facilities issues aren’t the only challenge, Ellison said. Continuing to “evolve” curriculum, especially in regards to project-based learning, is another area of focus, she said.

“Now we have Terri [Holden] who brings more experience with PBL, and a lot of teachers have ideas of how [PBL] evolves,” Ellison said.

“There’s a feeling of wanting to move [PBL] forward,” she said.

In response to the recent release of the district’s report card from the Ohio Department of Education, which overall gave the district a C-rating, Ellison said it’s important to look at, but that it must be balanced with other measures of the district’s performance.

“I feel like we need to pay attention [to the report cards], and we need to understand what’s going on in the ratings,” Ellison said.

At the same time, she said, “we need to be aware that some of it is more or less applicable to us.”

In addition, Ellison said, the district should balance the report card results with “what we say we are about.” In that case, the district’s Quality Profile, an internal assessment it releases each year may be a more apt measure, she said.

In addition to statistics like the number of students who pursue college after graduation — 85% according to last year’s profile — the Quality Profile also features qualitative descriptions of projects, Ellison said.

“It highlights some of the projects,” she said. “With A, B, C, D, you don’t get a picture of the school,” she added of the school report cards.

With her public health background, Ellison also weighed in on the school’s health program, which she said has been getting stronger in recent years. She cited efforts to curb vaping and bringing back Planned Parenthood to teach sex education at the schools.

In the area of school-based mental health, Ellison noted there are social support peer groups and a social worker, in addition to counselors. Even then, she said  the school could have “more capacity” in that area.

“I think we would have takers if we had more school-based mental health capacity.”