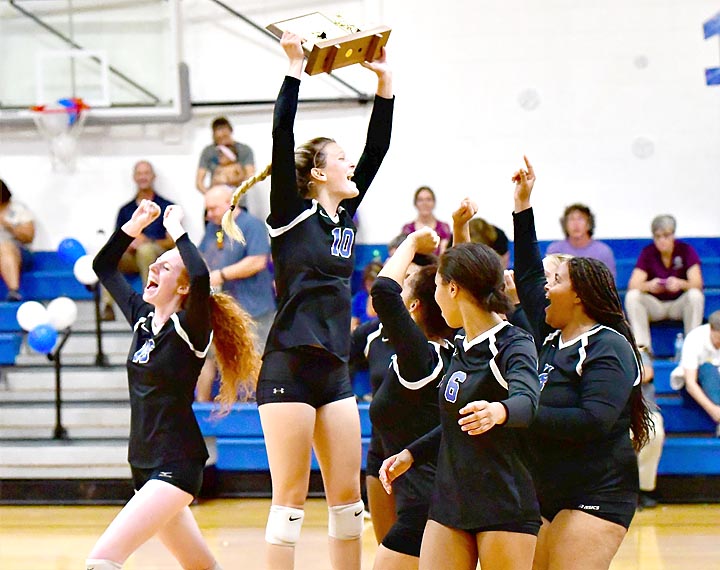 The Yellow Springs High School gym was festooned with blue and white balloons while students sitting in the “dog pound” section of the stands held up giant posterboard-photo heads of graduating seniors Tyler Linkhart, Olivia Snoddy and Chanel Phillips on Thursday, Oct. 3, as the girls volleyball team celebrated senior night.

Making the celebration all the sweeter was the possibility that the team would end the evening as Metro Buckeye Conference champs for the second year in a row.

Entering the match undefeated in league play, the Bulldogs needed the win against second-place Emmanuel Christian Academy to secure the title.

With excitement growing in the stands, the Bulldogs dispatched the visiting Lions in three high-energy sets, 25–15, 25–9, 25–17. (See the coach’s recap in the Bulldog Sports Roundup.)

For graduating senior and team captain Tyler Linkhart, it was a match to remember.

“It felt like all the work we put in paid off,” she said by phone this week.

“We reached our goal. That’s what we were working for.”

Linkhart made the final set and match point of the night, with a “kill” — spiking a ball over the net with such force and/or precision that the other team can’t return it — set up by teammate Emma Ronnebaum.

Linkhart said she knew the play would be good.

Winning against Emmanuel Christian, from Springfield, was especially satisfying, she added, as the team has been the Bulldogs’ main rival for the conference championship for several years, taking first place the year before last, 2017, and coming in second in 2018.

The Bulldogs started their winning run in 2015, finishing on top again in 2016, with Emmanuel Christian second.

Linkhart’s only regret about Thursday’s game was that one of the Lions — “the best on her team” — had an injury and had to sit out. She knows the girl not only as an opponent for the past four years, but also as a teammate in the same recreational club.

“I was sad I didn’t get to play her,” Linkhart said.

The Bulldog win was a joyous victory for the team, but players said they were ready for it.

“I actually expected it,” junior Annlynn Foster said this week.

“We all agreed we were going to win it, and when you put your mind to it [you succeed],” Foster said.

At the same time, “we definitely had to fight for it,” she added.

Foster plays the “middle” position, either blocking balls in the front row or returning them from the back row with “digs,” getting under and keeping difficult “attack” balls in play.

At a relatively short 5’5”, Foster can surprise other teams with her blocking skills.

“I have a lot of height in me,” she said about her ability to jump and reach a ball.

It’s one of her favorite moves on the court.

“Every time I block a ball, it really hypes me up,” she said.

But her favorite aspect of playing volleyball is the community and family feeling of the team.

“When I’m there, it feels like a home to me,” Foster said.

“It doesn’t matter if you’re a beginner, everybody treats you the same way. It’s a warm, comforting feeling,” she said.

“The girls on volleyball are so close knit,” Smith said.

“I look at Tyler as an older sister,” Foster said.

“And I have a great relationship with Aaliyah [Longshaw] and Angie, even though they’re younger than me,” she added.

“They work hard in practice and are open to feedback on what they could do to improve,” she wrote in an email this week.

“Every player on the team can do all the skills needed for a successful team — each one can hit, pass, serve and attack. That’s what makes this team so different from most of the teams we have played.”

Team members have been working since June, she added, coming to open gym time throughout the summer in lead up to the fall season.

The result is that “the girls come together beautifully as a team,” according to the coach.

“These girls have continually shown up and worked hard. … They are very deserving of the successful season they’ve had,” she concluded.

Two regular season matches remained after Thursday’s  competition. The season’s only loss has been in nonconference play against Troy Christian, a match that went to five sets. After last Thursday’s match, the team was 16–1 overall, and 11–0 in league play.

The coach and team members have high hopes for tournament season, which begins Saturday, Oct. 19, at Covington High School.

The players aren’t ready for the season to end, especially since they’ll be saying goodbye to seniors Linkhart,  Snoddy and Phillips.

But she also noted that the team is in good shape, and “strong girls are coming up.”