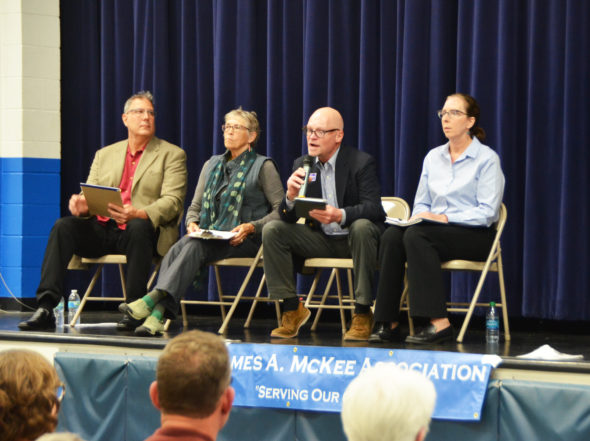 Four of the five candidates running for Village Council in the Nov. 5 election participated in the James A. McKee Association Candidates Forum on Thursday, Oct. 24. From left is write-in candidate Dean “Dino” Pallotta, Marianne MacQueen, Jim Johnson and Laura Curliss. Lisa Kreeger, another candidate, was out of town on business and unable to attend. See the Voter’s Guide for more information. (Photo by Megan Bachman)

There was much overlap and some areas of difference among candidates for Yellow Springs Village Council at last week’s Candidates Night Forum, hosted by the James A. McKee Association in advance of the Nov. 5 election.

Affordability, housing, economic development and village demographics headed the list of topics discussed at the forum.

About 60 villagers attended the event, held at Mills Lawn gym and facilitated by Fred Bartenstein.

Village Council is this year’s only contested race. Five candidates are running for three Council seats: incumbents Lisa Kreeger and Marianne MacQueen, and newcomers Laura Curliss, Jim Johnson and Dean Pallotta, as a write-in candidate. As Kreeger was out of town and unable to attend, her husband, Todd Kreeger, read a statement in her absence.

Running unopposed for local office this year are school board incumbents TJ Turner and Sylvia Ellison, Mayor Pam Conine, Miami Township Trustee Chris Mucher and Miami Township Fiscal Officer Margaret Silliman. Among the uncontested races, Turner for school board and Mucher for trustee were in attendance.

Not in attendance were Ellison, unavailable at the last minute because of a family emergency; Conine, who was attending another event, with villager Katie Egart reading a statement in her absence; and Silliman, who was out of town.

All participating candidates were asked to deliver three-minute introductions, followed by a session of answering written questions from the audience.

In response to an audience question about how Yellow Springs can attract and retain a diverse population, Pallotta stressed affordability challenges.

“We’re not an affordable place,” he said.

MacQueen said she “truly understood” affordability, as a lower-income person herself. And she argued that the village needed to bring its age demographics, currently tilted toward older residents, more in line with the surrounding region.

Villagers 55 and older make up 50% of the local population, according to several candidates at the forum.

“Housing is so critical,” she said.

She mentioned an “affirmative marketing plan” developed by the Chamber of Commerce, Home, Inc. and The 365 Project to attract African Americans to the village.

Curliss said that if elected, she would focus on developing moderate-income housing in the $150,000 to $200,000 range, an area also mentioned by MacQueen. And in earlier remarks, Curliss urged the village to have “an honest conversation about demographics,” including dealing with the trend toward fewer school-aged children.

Johnson said the village should take pride in its history of diversity, which remained “in our soul.”

In response to a number of questions concerning housing, candidates expressed different views about the suitability of the Glass Farm property for homes and the Village’s role in developing that site. The Village-owned Glass Farm has been under discussion for years as a possible site for housing.

“I would have to be convinced to put housing on Glass Farm,” Curliss said, citing poor soil quality.

But MacQueen contended that the property is suitable for housing development, and constitutes the “one parcel” under Village government control.

Pallotta emphasized the need for an outside developer’s expertise to make sure a potential Glass Farm project was financially viable.

“We don’t want to subsidize it with a property tax hike,” he said.

MacQueen raised the possibility of expanding the village’s geographic boundaries to improve local affordability and diversity.

“I love being a village, but we have gotten trapped in saying ‘no change,’” she suggested.

Curliss disagreed with that approach.

“I’m not in favor of expanding our boundaries,” she said, noting that communities with populations of 5,000 or more are designated as cities in Ohio, with “a whole other set of laws.”

She advocated continuing infill efforts and completing the village greenbelt.

“If we don’t, Fairborn will be a stone’s throw away,” she said.

Johnson said he would like to see the village grow moderately.

“I’m not in favor of becoming a city size,” he noted.

MacQueen touched on the issue of Village-community communication, pledging to work toward improving communication with villagers, if re-elected.

“I realize there have been times when Council has acted too fast,” she said.

Another top issue in the Council discussion was economic development, the focus of multiple audience questions.

All candidates stressed its importance for Yellow Springs, but differed on how Village government could stimulate the local economy.

Johnson and Pallotta spoke about broadening the tax base by attracting new business to the village.

“I believe in spreading the cost of Village government around,” Johnson said in his introductory remarks.

Pallotta highlighted the need to draw in “more businesses that fit our core values,” and stressed the local Chamber of Commerce’s role in doing so.

MacQueen and Curliss emphasized the importance of the newly forming Community Development Corporation, or CDC, a  nonprofit bringing together Village, township, school and Antioch College leaders with a focus on economic development, housing and other topics.

Curliss briefly described her experience with a similar organization in Wilmington, where she previously worked in local government.

Kreeger, in the statement read by her husband, touched on economic development as an area of priority, highlighting her role in helping to form the village’s new CDC.

Regarding specific economic development ideas, Johnson indicated his support for the development of community broadband — also a priority for MacQueen — and his idea to collaborate with area academic institutions to bring start-up enterprises to Yellow Springs.

He also contended that his experience as owner of Dino’s Cappuccino’s would be beneficial to Council.

“We haven’t had a business person on Village Council for a while,” he said.

“Miraculous things happen” when you improve buildings, she noted.

“There are limits to what Village government can do for economic development,” she said.

Regarding other topics, MacQueen and Curliss stressed the importance of the Vernay cleanup, on the heels of a public meeting with U.S. EPA officials earlier that evening.

In addition, MacQueen and Kreeger addressed the proposed Village Charter amendments that would expand local voting rights. Both said they favored allowing non-citizen residents and 16- and 17-year-olds to vote in Yellow Springs elections.

More than a dozen other questions were read by the facilitator but not posed to candidates due to time constraints. These questions ranged from Council’s role in partnering with Antioch and dealing with the climate crisis to combating racism and addressing sexual assault cases in the village.

TJ Turner, running unopposed for a seat on the five-member Yellow Springs school board, responded to about a dozen audience questions, most focused on school facilities plans and the district’s project-based learning, or PBL, curriculum.

“I did not understand the challenges of affordability the village has,” he said.

Turner also acknowledged that the district needed to improve the maintenance of its buildings.

“It’s something we need to do better at, quite frankly,” he said.

He cited a “regularly scheduled plan for maintenance” and a possible increase in the schools’ permanent improvement levy as two possible steps toward improving maintenance.

Regarding PBL, Turner signaled his strong support for the district’s curricular approach, while also emphasizing that it represented only a part of the total learning program.

“We do PBL on top of that [traditional] education,” he said, adding that in most cases students did “a couple of projects a year.”

“How do we raise test scores without having to just teach to the test?” he asked.

Miami Township Trustee Chris Mucher, running for his sixth full consecutive term, responded to a question about whether the new Miami Township Fire-Rescue firehouse would come in under budget.

The township broke ground on the new station, to be located at 1001 Xenia Ave., in September.

The evening began with a prepared statement from incumbent Mayor Pam Conine, read by Katie Egart. In her statement, Conine quantified the many ways she’s been “visible and active” as mayor. Among these included logging 883 office hours and attending 150 events.

Addressing the importance of the local Mayor’s Court, Conine stated that as of October 2018, Mayor’s Court was seeing 100% of the cases eligible to appear before the court, an issue of concern to many villagers.

The annual fire pump testing at Friends Care Community will be conducted on Thursday, Oct. 21, beginning at 9 a.m. During this test, villagers may experience water discoloration and are advised to run their faucets until the water runs clear. Bottled water and rust remover will be available at the Bryan Center for those who need them. For more information, call 937-767-1702, ext. 2.