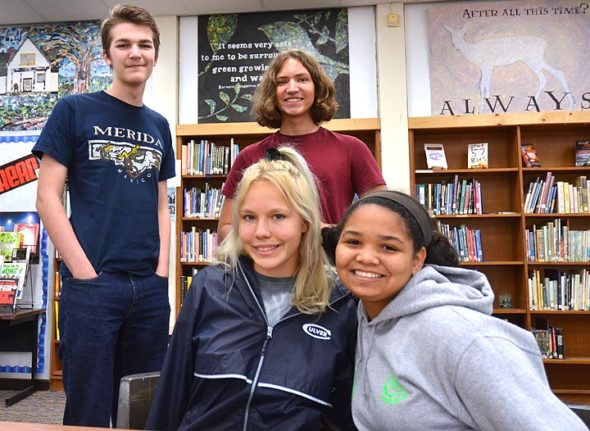 Local YSHS students met in the school’s library recently to give their opinions on the proposed charter amendment. If the amendment is approved, one of its provisions will give local 16- and 17-year-olds the right to vote on village issues and candidates. Pictured in front: Tahlia Potter and Shaylee Smith; in back: Jonah Bahn and Gideon Naziri. (Photo by Lauren “Chuck” Shows)

Over the last several weeks, villagers of legal voting age have taken to public forums to share their opinions on a portion of a proposed amendment to the Village charter that would allow 16- and 17-year-olds to vote on Village issues. On Nov. 5, those same adult voters will head to the polls to decide whether or not the amendment will pass.

But as the ones who would be directly affected by this part of the amendment, should it be voted in, what do local teenagers think?

“I want to be able to vote,” said 16-year-old Jonas Bahn. He was one of five YSHS students who stopped by the school’s library after the school day was over to voice their opinions on the proposed amendment.

Tahlia Potter, 15, popped in on her way to cheerleading practice.

“I feel like young people are often undermined or overlooked, because we don’t quite have voices yet, so I think [the Charter Amendment] is great,” Potter said.

All the teens who spoke to the News were supportive of the amendment, but were all disappointed that the proposed amendment wouldn’t allow them to vote for school board candidates or on school levies; the amendment specifies that 16- and 17-year-old voters would only vote on village issues and offices, and not school district matters.

“We’re the ones in the schools — actually in the building and in the system,” said Shaylee Smith, 16. “I feel like we should have a voice on what to do with that system.”

Phillip Diamond, 17, agreed: “The biggest part the village has in our lives is in this school. If I could vote, I would prioritize having a say in the school buildings and the school board over voting for mayor.”

The students were aware of one of the biggest criticisms against letting younger teenagers vote: that they might be voting on things that don’t always affect them directly, particularly village-wide tax levies.

But he said he doesn’t think some of the other criticisms he’s heard hold up to scrutiny.

“The argument is that we’re not knowledgeable, so we shouldn’t vote,” Diamond said. “But we go to school every day — we can learn how to vote and how to figure out who to vote for.”

“If I could actually influence stuff, that’s more of a reason to be informed about it,” added Bahn.

Gideon Naziri, 16, chimed in that, in his view, those who currently have the right to vote are just as likely to be ignorant of what they’re voting on as young people are assumed to be.

“I don’t think it would do any harm,” Naziri said. “I don’t see how it would be any more detrimental than letting any other age group vote.”

Smith said that, on the contrary, having the opportunity to vote earlier on local issues might help young voters become more informed, at least about voting itself.

“When you’re 18 and going into voting for everything, national stuff, you don’t really know much,” she said. “Even though this is a small town, we can learn something about the process of voting.”

In addition to helping young people learn to vote, Diamond said he sees it as a good strategy to get voting numbers up in general — in 2018, only 53% of U.S. citizens of voting age showed up at the polls.

“I think it will help establish the importance of voting at a younger age so that we continue voting as we get older,” he said.

But both Smith and Potter said that they don’t think villagers should worry about droves of teenagers showing up at the polls if the amendment is passed.

Potter agreed: “I personally don’t think many would utilize their vote — and those who do, it would be because they’re hearing a lot about local politics in their household. So in that way, it might even be a second vote for their parents.”

Council members have stated that, should the amendment pass, Village government would work with local educators to prepare students to vote at an earlier age.

Kevin Lydy, who has taught U.S. history, government and economics at YS High School since late 2016, said his classes already tend to cover some local issues — for example, after the New Year’s Eve ball drop in the early hours of 2017 resulted in a tasing by local police, Lydy’s classes took some time to talk about ways to improve relations between the community and the police. During Lydy’s tenure, his classes have also had visits from Mayor Pam Conine, former Village Manager Patti Bates and Clerk of Council Judy Kintner, and they have visited Village Council.

“If the amendment were to pass, I don’t know that what I teach about local politics would change, except that it might become a bit more frequent,” Lydy said. “We covered the presidential election in 2016 and will again in 2020, so we’d probably also talk more about the local elections in the fall and spring.”

Lydy said that giving young people like his students, who are often passionate and vocal about issues they care about, a say in local politics could be crucial to their educations.

“Right now, they’re not able to change things on their own — they can protest and try to get someone else to influence things for them,” he said. “But elected representatives aren’t going to listen to them now, because they’re not 18. So giving young people the opportunity to affect change basically necessitates them getting informed.”

Of course, passing the amendment could encourage young people to affect change in more ways than one: When the teenagers were reminded that the amendment would also allow them to run for local office, the YSHS library fell quiet for a few moments.

Bahn broke the silence: “Sweet,” he said, and his fellow students laughed.

“The first step on my way to world domination.”