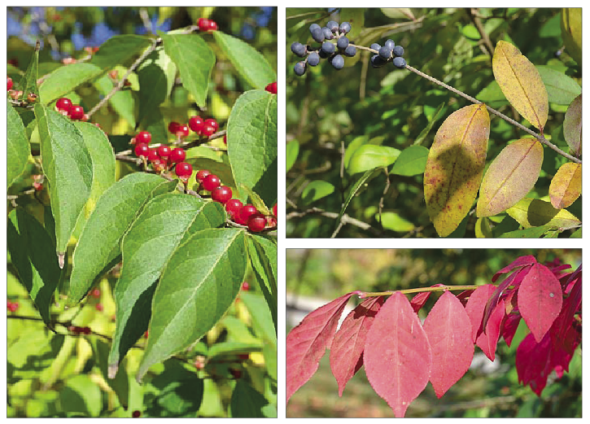 Pictured clockwise, from left, Amur honeysuckle, common privet and burning bush are three non-native invasive woody shrubs common in the local landscape. Of the three, honeysuckle is by far the most destructive. But popular ornamentals privet and burning bush are also of concern, invading Glen Helen and other local woods. Autumn is a good time to remove these species. (Photos by Audrey Hackett)

Invasive of the month— Impact of ornamentals not pretty

After recent cold and snow, the fire of fall has mostly dimmed from the landscape. Gone or fading are the brilliant reds and pinks of burning bush, a popular ornamental shrub that lights up local yards each autumn.

Pretty as it is, the shrub is considered invasive by most experts.

“It’s not on the same scale as honeysuckle, it’s more a slow-moving thing,” local landscaper and horticulturalist Bob Moore said in a recent interview.

Burning bush is one of a trio of invasive woody shrubs the News is highlighting this month. Rounding out the triple threat is common privet, often used as a privacy hedge, and Amur honeysuckle, the most widely known, and widely reviled, invasive plant species in our area. November is a good time to identify these species — and remove them from your yard.

The present article is the last in this season’s “invasive of the month” series, which began with a two-part article on the local impact of non-native invasive plants last spring, and continued with monthly features focused on specific invasives of local concern. The series was undertaken in consultation with Glen Helen.

We plan to return with more of our local “least wanted” flora in the spring.

Burning bush, Euonymus alatus, is the easiest to identify. It grows up to 10 feet tall, depending on the variety, with leaves that turn pink-red in the fall. Harder to spot are its tiny, dangling red berries. The shrub’s autumn color and general hardiness account for its widespread planting, according to Moore.

“It was planted at every new house in our area for the last 30 years,” he said.

Common privet, Ligustrum vulgare, is a large shrub reaching up to 16 feet. Its dense branching structure makes it a popular privacy hedge. It has small leaves, which turn yellow or coppery in the fall, and clusters of blue-black fruits that persist into winter.

Both burning bush and common privet are prevalent in yards throughout Yellow Springs, as well as in alleyways, weedy margins and local woods.

Amur honeysuckle, Lonicera maackii, bedevils the landscape across our region. Though deciduous, this species of bush honeysuckle hangs onto its leaves into winter, and is one of the earliest plants to leaf out in the spring. Honeysuckle’s tenacity gives it a competitive edge over native plants — and makes it easy to identify.

See something green in the November woods, and chances are it’s honeysuckle.

The plant produces clusters of bright red berries in late summer that remain through the fall, another identifying feature.

All three species are widely considered invasive, but honeysuckle is in a class by itself. One of 38 non-native invasive plants banned for sale in Ohio, Amur honeysuckle has profoundly altered parts of the local landscape over the past 30 years. Where it moves in, native plants are crowded out and die off, leading some to dub Amur honeysuckle a “green death.”

Honeysuckle has been especially destructive in local woods, where it takes the place of a rich understory layer. Honeysuckle-laden forests are less healthy and resilient, experts say.

“Honeysuckle is by far the most pervasive of the woody shrubs; it occupies ecological niches year-round, displacing many native species,” Glen Helen’s land manager, Ben Silliman, wrote in a recent email.

The Glen has cleared about 325 acres of honeysuckle to date, with a focus on higher-quality areas away from trails and roads, he added. The preserve occupies about 1,000 acres in total.

Burning bush and common privet are less harmful than honeysuckle. Neither is currently on the state’s invasives list, but area experts still consider these species a threat.

Burning bush is presently being assessed by the Ohio Invasive Plants Council, or OIPC, while several privet varieties are also under review. A fact sheet from the Ohio State University pinpoints the potential impact of common privet.

The fact sheet also notes that common privet thrives in sunlight but tolerates heavy shade, and leafs out early and holds leaves late — all sources of competitive advantage over native plants.

A recent post to the website of the Appalachian Ohio Weed Control Partnership warns of the negative impacts of burning bush.

“It thrives in the shade, where it displaces spring wildflowers and other natives. It is a very adaptable plant and can thrive in a variety of sites, wreaking havoc on a variety of native ecosystems,” the post states.

Locally, burning bush and common privet have moved into the Glen. Burning bush usually pops up as “individual specimens that are pretty easily eradicated,” according to Silliman. Common privet grows in riparian corridors, along the Yellow Springs Creek and the Little Miami River.

Both species are spread by birds and other wildlife, which carry their seeds beyond landscaped areas into the woods. Seeds also get washed by rain and local waterways into the Glen. Such dispersal is the reason for avoiding planting these species in your yard — or considering removing existing plants.

Experts agree that honeysuckle should be removed. Period. But that’s easier said than done.

According to a fact sheet from the OIPC, the most effective way to control honeysuckle is through a combination of cutting and the selective use of an herbicide such as glyphosate.

“Well-established stands of bush honeysuckles are best managed by cutting the stems to ground level and painting or spraying the stumps,” the fact sheet states.

This is the method the Glen uses.

Smaller stands, especially in shady areas where the plant is less resilient, may be eliminated by repeated cutting, provided plants are cut to the ground regularly over a period of years, according to the OIPC fact sheet. Consistency is key, because honeysuckle sprouts vigorously when cut.

Regarding burning bush and common privet, smaller specimens can be cut down and dug out of the ground, with care taken to remove their root systems. For both plants, cutting and digging is best done when the ground is moist.

Larger specimens of these species often require a combination of cutting and selective herbicide application, in the opinion of some area experts.

The Appalachian Ohio Weed Control Partnership recommends painting the stump of burning bush with an herbicide after cutting. A similar treatment is described as one option for common privet, according to the Ohio State University fact sheet.

“Simply cutting the shrub off at the base will cause prolific sprouting and increase the number of stems,” the fact sheet on privet states. Herbicide applied to the plant’s stump will kill its roots, the fact sheet continues.

A word of caution when cutting privet: the Glen’s Silliman notes that mature privet has “multiple hard but brittle stems” that can throw the chain off a chain saw.

The good, indeed beautiful, news? There are many attractive and ecologically useful native alternatives to invasive woody shrubs, according to Moore.

In his experience, local residents want to plant natives, but hesitate to lose the privacy and sense of sanctuary that mature privet or honeysuckle provides.

“People know honeysuckle is really invasive, but they don’t want to lose that sense of enclosure,” he said.

He works gradually with some local clients to replace invasives with a few native plantings a year, phasing out the non-native plants and allowing the new plantings to establish themselves and grow to greater size.

Native bushes that could replace invasive woody shrubs include bottlebrush buckeye, sweetspire and some viburnums — Moore favors viburnum juddii. Some varieties of hydrangea are also good options; oakleaf hydrangea, which is non-native but non-invasive, is especially lovely in the fall.

Small native trees to consider include pawpaw, white fringe tree, redbud, American hornbeam, blackhaw, wahoo (a native member of the euonymus family, with bright pink berries in the fall) and dogwood varieties such as red twig and gray dogwood.

“There are really great natives to fill the honeysuckle void,” Moore observed.

Best of all, by replacing invasives with natives, homeowners can create a landscape that nourishes the soul, and the health, of local ecosystems.

“You’re developing a true sanctuary — not just for you,” Moore said.