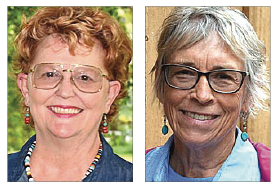 Lisa Kreeger and Marianne MacQueen were re-elected to Council; the third seat is still undetermined, pending validation of all outstanding ballots.

On Tuesday, Nov. 5, local voters returned Lisa Kreeger and Marianne MacQueen to Village Council, according to unofficial final results from the Greene County Board of Elections.

The incumbents were the top two highest vote-getters among candidates whose vote totals have been released.

However, the winner of the third seat is currently unclear, as votes for write-in candidates have not yet been counted. Those figures will not be available until the final official results are released by the elections board on Tuesday, Nov. 19.

Dean Pallotta (write-in) — not yet counted

The total number of votes cast on or before election day and reported was 3,454, with 2,837 cast for the four petition-certified candidates and 617 for a write-in candidate. It is not possible to determine yet how many of the 617 were valid votes for Pallotta, the certified write-in candidate.

In addition, the unofficial final results do not include provisional ballots cast at the polls or absentee ballots that have yet to be received. Absentee ballots were to have been postmarked by the day before election day.

According to Greene County Board of Elections Director Llyn McCoy, the board cannot yet confirm the winners of the race.

McCoy said that the delay in reporting write-in candidate totals is because of the lack of a write-in reporting option available on the county’s new voting machines.

“With our new voting equipment we have to look at each ballot,” McCoy said.

McCoy added that there were no issues with the voting process involving the new machines.

After all votes have been counted, the two candidates with the most votes will win four-year terms; the other elected candidate will serve for two years. New members take their seats on Jan. 1, 2020.

Precinct-level breakdowns were not available by press time; they will be published online at https://www.ysnews.com and in a future issue of the News.

Yellow Springs Mayor Pam Conine was re-elected to her position with 1,041 votes. She ran unopposed.

In the uncontested race for Yellow Springs School Board, Sylvia Ellison and TJ Turner were re-elected with 1,009 and 935 votes, respectively.

By a wide margin, voters in Greene County renewed a five-year, 0.9 mill property tax levy for the operation, management and maintenance of county parks and trails. The final tally was 18,056 voting in favor and 7,166 voting against (72–28%).