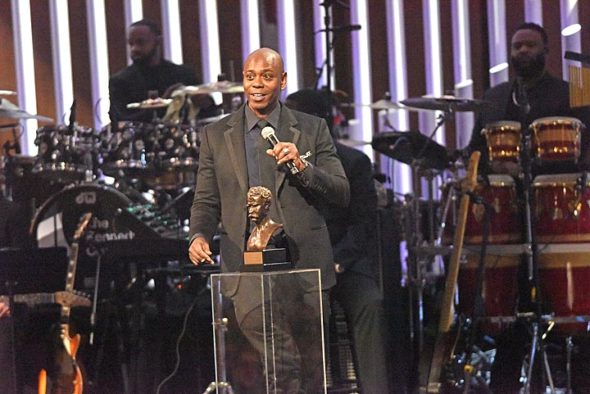 Comedian and actor Dave Chappelle, a longtime resident of Yellow Springs, was awarded the Mark Twain Prize for American Humor in a gala celebration Sunday, Oct. 27, at the Kennedy Center for the Performing Arts in Washington, D.C. The photo shows him accepting the award, considered the highest honor in comedy. (Submitted photo by Darrel R. Todd)

Called the “voice of his generation” by fellow comedian and actor Eddie Murphy, longtime Yellow Springs resident Dave Chappelle was awarded the Mark Twain Prize for American Humor on Sunday night, Oct. 27, at the John F. Kennedy Center for the Performing Arts in Washington, D.C.

Surrounded by family, friends and fellow entertainers from throughout his 30-plus-year career, Chappelle was feted by a lineup of nationally known comedians, actors and musicians in a nearly three-hour gala performance that included musical offerings, spoken testimonials and, not surprisingly, considerable humor.

In accepting the award, recognized as the highest honor in comedy, Chappelle expressed not only his happiness at seeing so many people present from throughout his life, but also his appreciation at being part of the comedy community.

He gave special thanks to his wife, Elaine Chappelle, and his mother, Yvonne Seon, who looked on with other Yellow Springs family members from a theater box at stage right.

“Elaine, you help me and improve me in everything I do,” Chappelle said before the sold-out Kennedy Center audience.

He also recounted some of the ways his mother had encouraged and supported him when he was a teen-aged aspiring comic — bolstering his confidence as a sensitive person in a frequently harsh world, telling him that his story-telling gift was like that of an African griot and accompanying him to his early comedy club shows.

“She’d do a full day of work,” he told the crowd, turning to his mother to speak to her directly. “You’d be there falling asleep, just waiting for me to go on.” Facing the audience again, he continued: “She would watch my show every night.”

Then, in a familiar Chappelle-style segue, from serious sentiment to punchline, he paused and asked the audience, “Do you know how long that car ride home is?” noting that his raunchier jokes were sometimes met with a subtle, maternal admonition.

But admonitions were slight and far between Oct. 27, as a string of high-profile personalities praised Chappelle for his “fearlessness,” “truth-telling” and the “honesty” of his comedy.

Previously named guests Trevor Noah, the comedian, writer and host of Comedy Central’s “The Daily Show;” and Chrissy Teigen, the model and television personality who is married to John Legend, did not appear as anticipated.

Freeman, the Academy Award-winning actor who’s deep mellifluous voice has popularly been called “the voice of God,” opened the show with an introduction declaring “the best is yet to come,” regarding Chappelle and his career.

The celebration then kicked into high gear as the Radical Elite Show Band of Washington’s Duke Ellington School for the Arts — Chappelle’s high school alma mater — filled the theater aisles and stage performing a raucous rendition of Prince’s “Let’s Go Crazy,” while video of Chappelle’s comic sketch portraying the late singer played on a jumbo screen behind them.

A collection of video clips spanning Chappelle’s career in movies, on television and from his club and stage shows, continued to punctuate the proceedings as the evening’s celebrity guests created a portrait of an artist who mentors aspiring entertainers, encourages colleagues to take risks and expands the boundaries of his profession.

Former host of “The Daily Show,” Jon Stewart, who has toured recently with Chappelle and was also a guest in August when the comedian put together a concert in Dayton in the wake of the mass shooting there earlier that month, spoke of his respect for his friend’s integrity as a performer — walking away from a $50 million deal with Comedy Central when the work didn’t feel right — and his appreciation for Chappelle’s humanitarianism.

“I watched him help a city heal a wound of violence and replace it … with love and with compassion,” Stewart said of the Dayton experience.

John Legend, who is the first African-American EGOT holder (winner of an Emmy, Grammy, Oscar and Tony), also spoke of the Dayton benefit, where he said Chappelle brought “comfort after tragedy,” not mentioning his own visit and performance in the that city’s traumatized neighborhood last summer.

Legend focused much of his comments on his and Chappelle’s Ohio connections.

“Ohio has been responsible for more than its fair share of black excellence,” Legend said. But, he added, those individuals usually have to leave to make their careers.

“Amazingly, Dave still lives in the Buckeye state,” the Springfield native said. “He lives in the so-called forgotten America.”

But it’s there, in his hometown, Legend continued, that Chappelle has orchestrated pop-culture touchstone events in a local barn — which Yellow Springs residents know as his Juke Joint gatherings at Whitehall Farm.

Tiffany Haddish and Sarah Silverman both talked about Chappelle’s influence as a friend and performer.

“He is a mentor and my big brother,” Haddish, the breakout star of the 2018 summer movie “Girl Trip,” said, going on to recount an impromptu Christmas bowling excursion with Chappelle and his entourage that ended up at Eddie Murphy’s palatial home.

Silverman spoke of being a young performer with Chappelle in New York City, where he moved after graduating from Duke Ellington School of Arts at the age of 17.

“His creative thinking is his art,” Silverman said. “His stand up blows my mind, [even when] sometimes I wholeheartedly disagree with him.”

It’s been widely reported that Chappelle has come under critical fire in recent months for some of the material in his newer routines — particularly for derisive statements about two men who have accused the late singer Michael Jackson of sexual abuse and scornful jokes about the LGBTQ community, whom he calls “the alphabet people” in his latest Netflix-released stand-up special.

But fellow entertainers who stopped to talk to the press before the show asserted Chappelle had a right to make controversial or distasteful comments.

“To mention [topics that are supposedly off limits], that’s what makes Dave Chappelle great,” said longtime friend and collaborator Donnell Rawlings, who attended the gala as an audience member.

“I don’t always agree with what he says, but it’s always real,” said insult comic Jeff Ross, another celebrity in the audience.

Later, on stage, Michael Che, a head writer at “Saturday Night Live” and the co-host of that show’s Weekend Update segment, asserted that being an honest. i.e. real, comedian doesn’t necessarily mean making statements that are true.

“Rodney Dangerfield was actually mostly respected,” he said of the comedian whose catchphrase claimed he got no respect.

As for Chappelle, “He’ll make fun of everyone,” Che said. “Whether you’re white, or gay. End of list,” adding a dig to his otherwise flattering comments.

Chappelle, for his part, speaking on the red carpet before the show, said he believes in an artist’s right to be wrong, to go too far and possibly fail.

“If I wipe out, I hope people will find it in their hearts to forgive,” he said.

In answer to this reporter’s question about whether he re-evaluated his work and its impact after learning he would be awarded this year’s Mark Twain Prize, Chappelle paused to reflect.

“No!” he concluded, and laughed.

“But I am truly honored,” he added. “It’s humbling and empowering, to stand on the shoulders of Richard Pryor [the first Twain Prize awardee] and perhaps be the shoulders for someone else to stand on.”

The professional stakes remain the same regardless of the award, he said.

“If I could never tour again and make jokes, I would die,” he said.

In addition to the performers on stage, a number of celebrities (besides Rawlings and Ross) dotted the theater audience, including musician Chance the Rapper, who had hosted “Saturday Night Live” the night before in New York City and was a featured performer in August at Chappelle’s benefit concert in Dayton; as well as comedians Chris Tucker, Marlon Wayans, George Lopez and Mo Amer, the last of whom performed in Yellow Springs last year for the Antioch School’s benefit and auction.

A number of extended family members and friends from Yellow Springs were in attendance as well.

The annual Mark Twain Prize, initiated in 1998 by the Kennedy Center, recognizes individuals “who have had an impact on American society” in ways comparable to the award’s namesake, 19th-century writer and humorist Mark Twain.

Murphy, who was given the award in 2015, praised Chappelle in a pre-taped video.

“Dave is so much smarter than everyone,” Murphy said. “He’s stretched the art form. He is the voice of his generation, no question.”

Chappelle, 46, grew up in the Washington, D.C., area, spending his middle school years and subsequent summers in Yellow Springs, where his father, the late Bill Chappelle, was on the music faculty at Antioch College. His mother is an ordained Unitarian Universalist minister and retired university professor who was the first director of the Bolinga Black Cultural Resource Center at Wright State University.

The co-creator and star of the widely acclaimed “Chappelle Show” on the Comedy Central cable station that debuted in 2003, Chappelle in recent years won an Emmy for his November 2016 appearance as host on “Saturday Night Live” and Grammy Awards for the vinyl recordings of a series of comedy specials released on Netflix, one of which also won an Emmy.

On the night of the award gala, Kennedy Center staff said Chappelle’s recognition had generated more ticket interest and featured more guests than any prior award presentation.

When accepting the award at the end of the show, after all the thank yous were made, Chappelle asserted his belief in comedy’s nature as a no-holds-barred enterprise.

“I don’t think there’s an opinion in this country that is not represented in a comedy club by somebody,” he said. “I know comics that are very racist. I watch them onstage, and everyone’s laughing and I’m like, ‘Ooh, that mother-****** means that s***.’ I don’t get mad at them, don’t hate them. We go upstairs and have a beer, and sometimes I even appreciate the artistry that they paint their racism with. Man, it’s not that serious.”

“The First Amendment is first for a reason,” he concluded, following up in classic Chappelle punchline style: “The Second Amendment is just in case the first one doesn’t work out.”

A taping of the Oct. 27 award event will be edited down to two hours and aired on PBS stations nationwide on Jan. 7, 2020, 9 p.m. Eastern time

Editor’s note: Coverage of this event was made possible by a grant from the Ohio News Media Association.