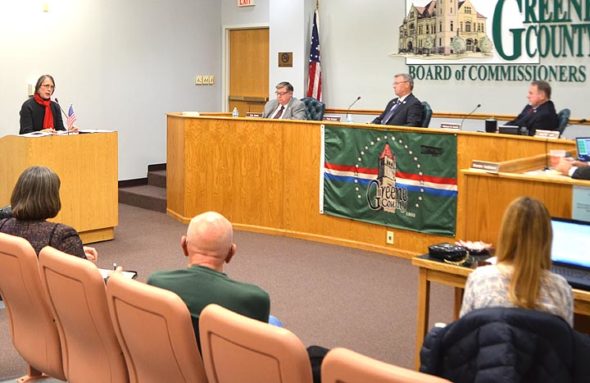 Yellow Springs resident Cyndi Pauwels testified at last Thursday’s public hearing on a proposed sales tax increase to pay for a new, larger county jail. Villagers raised questions and concerns about the plan for a $70 million new jail, providing the majority of public testimony at the hearing. A sales tax proposal could be put before voters in March 2020. (Photo by Audrey Hackett)

Yellow Springs residents made a strong showing at last Thursday’s public hearing on a proposed sales tax increase to pay for a new county jail.

At least nine villagers attended the jail tax hearing, out of a total audience of about 35 citizens, county employees and area law enforcement personnel. Most villagers in attendance spoke, representing the majority of public testimony. Two themes dominated villagers’ remarks: skepticism about the need for a larger jail, and a desire for the county to vigorously pursue alternatives to incarceration.

“I will not vote for a levy or tax that will allow us to put more people in jail,” villager Jessica Thomas stated.

She urged the county to expand its treatment programs rather than put money toward a new jail.

“Treatment is the better option,” she said.

Other villagers spoke in favor of bail reform. According to Al Schleuter, 57% of inmates in Ohio jails are awaiting trial; studies show that many are there because they can’t afford to post bond. Some communities around the nation have eliminated bail, he noted.

Villager Cyndi Pauwels acknowledged the hard work that had gone into the county’s jail plan. Having “closely followed” the jail planning process for the past two years, she affirmed the need for a new county jail — but questioned the scope of the county’s planned expansion.

“I fully agree that Greene County needs a new facility. … But is that much really needed?” she asked.

Greene County Sheriff Gene Fischer opened the hearing, outlining his plan for building a 500-bed jail that would cost the county a total of $70 million. The new jail would combine and replace the county’s two existing jail facilities, adding 30% more beds. In addition, the plan calls for renovating the existing 236-bed Adult Detention Center, or ADC, into a drug rehabilitation and treatment center that would be operated by a third party.

As he has in past comments, Sheriff Fischer cited the need for a larger facility, while also emphasizing that he didn’t expect to fill the space in the near term. He was more specific than in the past about how many beds he anticipates filling, citing “no more than 450.”

The county currently maintains a total of 382 jail beds between its two facilities. That space is rarely filled, with an average daily population of around 320 inmates. However, the downtown jail is frequently at capacity, and has been under a federal court order for overcrowding since 1989.

County officials have previously said the county jail has the wrong mix of beds, with not enough for more serious offenders. As a local jail, Greene County Jail detains inmates serving sentences of up to two years, as well as those awaiting trial.

Thursday’s public hearing included powerful testimony from villager Mark Bateman, who said he had spent two weeks in Greene County Jail in connection with a felony charge related to writing a bad check.

“I didn’t see the sun for over two weeks,” Bateman said.

He spoke for about 15 minutes about conditions inside the jail, and the impact of his own incarceration.

Specifically, Bateman described high levels of inmate frustration, expressed through throwing food and stopping up toilets, and an insular, inmate-created culture that included trading medications after pills are dispensed by jail staff.

As for the economic impact of incarceration, Bateman said he lost a full-time job he’d previously worked hard to secure during his time behind bars.

“When I lost that job, I slipped much, much further economically,” he said.

Responding to the sheriff’s description of the proposed new jail as allowing for greater centralized supervision of inmates by fewer jail staff, Bateman voiced concern that such a design reflected a societal failure to reach and help people.

“We’ve missed an opportunity to create a society where we work together,” he said.

Based on his personal experience of jail conditions, including limited space for exercise and programs, Bateman testified that the county “absolutely” needs a new jail.

But he cautioned against approaching the project in a spirit of detachment from inmates.

The Nov. 14 hearing was the second of two public hearings on the proposed 0.25% county sales tax increase, which would generate an estimated $7 million per year to pay for the new jail. The term of the increase would be no more than 12 years. County officials have said that a sales tax rise is preferable to a property tax increase, allowing the cost of the facility to be shared by nonresidents. Up to 50% of Greene County Jail inmates reside outside the county.

All public testimony is part of the public record on the issue, and will be used by commissioners to determine whether to go forward with putting a sales tax increase on the March 17, 2020, primary ballot. That vote could take place as early as Nov. 26, and must occur before the Dec. 18, 2019, filing deadline with the Greene County Board of Elections, according to Board of Commissioners Clerk Lisa Mock this week.

While Yellow Springs residents offered most of the evening’s testimony, they weren’t the only area residents to speak. Four other county citizens provided comments on the issue of an expanded jail, offering a mix of opinions.

Robert Eustace of Beavercreek, who said he volunteers in the county jail, voiced support for an expanded facility. Such a facility is needed to relieve existing “packed” conditions, and provide more space for positive programming, he said.

“We can do so many more things in a new jail,” he noted.

But fellow Beavercreek resident Sandy Woodruff expressed strong opposition to an expanded facility, calling the plan to build a new 500-bed facility and renovate the 236-bed ADC “rather exorbitant.”

Woodruff stated her preference for drug and mental health programs and bond reform as measures to reduce the jail population.

No citizens who testified during the hearing opposed the sales tax increase. However, several questioned whether tax monies raised for a new jail would be better spent on programs to keep people out of jail.

And the question of whether a new, larger jail would result in more people behind bars loomed in remarks by villagers and others.

“I have a real concern. The tendency when you have added capacity is to automatically fill it up,” villager Bomani Moyenda said.

“It’s like closet space,” he added, provoking one of the evening’s few laughs.

But Commissioner Tom Koogler maintained that jail construction and sentencing were separate issues.

“The sheriff’s department follows orders from the court,” he said.

The News will continue reporting on the county jail project in upcoming articles focused on county jail expansion nationwide and other topics.