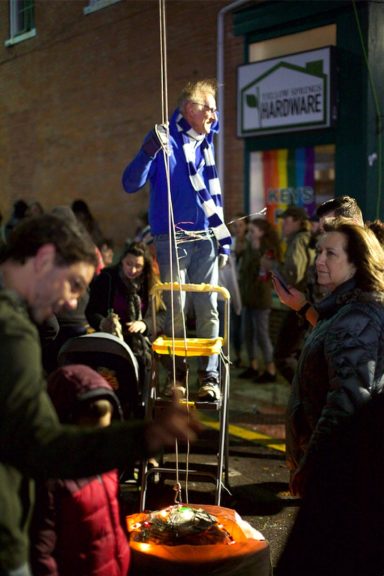 When Yellow Springs New Year’s Eve revelers descend on downtown streets near midnight Tuesday, Dec. 31, to mark the passing of 2019 into 2020 — and the start of a new decade — they will be participating in a local tradition that is marking its 40th outing this holiday.

The annual ball drop hasn’t changed a whole lot since its introduction in 1980. Some of us were younger then, of course; and many weren’t even born yet. But the practice of coming to the corner of Xenia Avenue and Short Street to count down the final seconds of the old year and welcome in the new amid the community embrace of family, friends and neighbors has remained fairly consistent — the 2016/17 police action notwithstanding.

Community lore and past News accounts tell how the first local ball drop was conceived by the late Prentice Tomas.

He pulled some of his many friends together to form the “Times Square Yellow Springs” committee, which may or may not have secured permission from the police department to occupy the downtown intersection around midnight.

Several sources say the first ball to be “dropped” was a beach ball, which Tomas is said to have thrown or kicked off either the Miami Bank roof or the Little Art Theatre’s marquee.

The YS News reported about 25 attendees, who the report said came out of a bar to witness the spirited celebration.

And a tradition was born.

Tomas and his crew came back the next year and the crowd reportedly grew to a couple hundred.

The early installments included the appearance of Father Time, played at least one year by the late Ron Siemer, and the New Year’s baby, played by Larry Gerthoffer for the first three years, complete with diaper.

It’s unclear when the current ball was first introduced.

A disco ball — reportedly “acquired” from Antioch College — encircled by a strand of multi-colored mini decorative lights — has been the night’s focus for as long as the current ball-drop impresario, Lance Rudegeair, can remember.

In an interview this week, Rudegeair said his first experience of the New Year’s tradition was in 1982/83. His first born, Shawn, was just two months old, and the young family, including Lance’s wife, Jean, headed downtown to check out the festivities.

The bank still had an outside clock — “a big, nice ornate clock,” Rudegeair remembers — which was used to count down the final minute.

The ball was dropped from a cherry picker, Rudegeair said, and in later years, it was attached to a cable wire that spanned the street from the hardware store — then owned by the Deaton family — to a telephone pole by the bank.

After Tomas died, a series of local people took on the ball duties, keeping the tradition alive.

He said he and Randy Deaton worked together for several years until the Deatons sold the hardware store.

After that, he continued on his own, often in more recent years assisted by his now grown sons, Shawn and Dustin.

He remembers years of snow, and years of rain, and one year when the temperature got to two below zero.

The Community Band played for a few years, he said, and he handed out copies of “Auld Lang Syne” for a couple of years, but he stopped when too many people left their music on the ground. He also one year handed out confetti-filled helium balloons, which were festive, but messy.

Every year has been magical, he said. Except perhaps the year police tried to clear the streets of revelers earlier than was traditional or anticipated by the crowd, which responded in anger and confusion.

“I call it ‘The Nightmare after Christmas,’” Rudegeair said. “I still don’t know what the heck they were doing,” he said of the police. (The police chief at the time resigned in the aftermath.)

That’s what Rudegeair likes best about it, he said, adding that he’s come to feel the the simpler gatherings are the best.

His setup routine is simple. He tries to arrive by 11:30 p.m. to make sure everything is in place and working. His only props are a step ladder and the approximately two-foot diameter ball, which is attached to a rope.

He tells the crowd to “please thank the police officers and don’t throw any bottles.”

The crowds are happy and congenial — “controlled chaos,” is his description.

“Practically every year someone hands me a bottle of champagne,” he said.

In recent years, cell phones help count down the time for the official drop, after which he’ll raise and drop the ball two more times.

“So latecomers can see it.”

During the rest of the year, the ball lives in a box in his basement.

“It has its own place,” Rudegeair, an artist, former faculty member at the University of Dayton and retired long-time local substitute teacher and coach, said.

Rudegeair notes that the ball’s lights are at least 36 years old, as are the pieces of cellophane tape that help hold the strand of lights in place. He hasn’t had to replace anything.

He said it’s been suggested to him that he could “retire” from the job and hand it over to someone else. But he’s not ready for that yet.