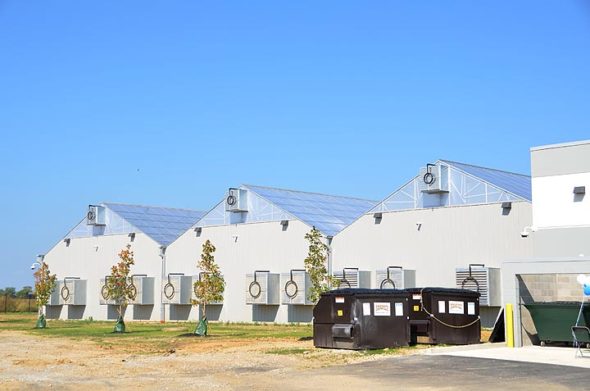 ‘Not a sale of the business’— Cresco to sell its property

Chicago-based Cresco Labs is selling its Yellow Springs property — but the sale won’t alter operations at its local medical marijuana cultivation facility, according to a company spokesperson reached for comment last week.

“It doesn’t change anything with the business [in Yellow Springs],” Chief Communications Officer Jason Erkes said.

Located at the former Center for Business and Education, or CBE, on the western edge of the village, Cresco’s Yellow Springs property is being sold as part of a $38 million sale-and-leaseback deal, which also includes a second Cresco property in Marshall, Mich. The buyer is San Diego-based Innovative Industrial Properties, a “leading provider of real estate capital for the medical-use cannabis industry,” according to the company’s website.

The sale is expected to be finalized this month. Included in the sale is the company’s eight-acre property on the former CBE land and its 25,000 square-foot cultivation facility.

Cresco will lease back the Yellow Springs property under a long-term lease agreement and continue to operate as a licensed cannabis cultivation facility, according to the company’s Nov. 26 press release on the matter.

“We go from being a landlord to being a tenant,” Erkes explained of the change.

A spokesperson from the Ohio Department of Commerce, which oversees the state’s Medical Marijuana Control Program, said the sale did not have to be vetted by the department “because this is not a sale of the business itself.”

“[We] are working with them to learn more as part of our due diligence,” spokesperson Kelly Whitaker wrote in an email this week.

Asked if the sale represented a pullback from Yellow Springs or the Ohio medical marijuana market, Erkes said it did not.

“It’s a way to get access to capital that’s locked up in real estate,” he said of the deal.

With operations located or pending in 11 U.S. states, Cresco Labs is seeking capital to further expand its cannabis business nationwide, Erkes explained. This includes both recreational marijuana and medical marijuana, he said.

Asked whether Cresco had expansion plans in Ohio, Erkes said the company didn’t currently have “specific” plans to expand here.

“The Ohio market is still ramping up,” he said.

“It’s not a big deal. There’s no new ownership of the company,” she said.

Wintrow said she had been in contact with Cresco Labs CEO Charlie Bachtell and local plant manager Ari Greenwald on the matter. Both emphasized that “basically nothing changes,” she said.

Part of a broader strategy

The company’s Nov. 26 press announcement emphasized the sale as part of a broader strategy by Cresco Labs to raise cash to grow its operations in states including Illinois, Pennsylvania, California and Nevada.

“[W]e have effectively strengthened our balance sheet to the tune of nearly $158 million,” the release states. That figure includes cash conserved from the company’s recent decision not to purchase a medical marijuana company in Florida.

In addition to medical marijuana, Cresco is seeking new opportunities in the expanding market for recreational marijuana, according to the release.

Recreational marijuana is now legal in 11 states and the District of Columbia, while most states have legalized medical marijuana under some circumstances, according to Governing.com, a media platform for state and local government.

Recreational marijuana use and sale will be legal in Illinois as of Jan. 1, 2020, and Cresco has an “unmatched opportunity” to increase its market share in its home state, the press release states.

The sale-and-leaseback deal involving Yellow Springs is not the only such agreement the company has made. In September, Cresco announced a similar deal for two of its Illinois medical marijuana facilities.

The company currently operates, or is in the process of acquiring, a total of 23 production facilities, according to its website.

Asked about factors involved in the choice of Yellow Springs and other properties for the sale-and-leaseback agreements, Erkes said no specific attributes were considered.

Sale-and-leaseback deals are an increasingly popular way for cannabis companies to raise cash, according to a Nov. 30 commentary at the website of the financial and investing advice company Motley Fool. The commentary notes that cannabis stocks have declined over the past eight months, and “quite a few [companies] are now scrambling to conserve their cash and cut costs to match more challenging market conditions.”

The commentary mentions Cresco and several other marijuana companies in connection with this trend.

But the commentary emphasizes that companies involved in these agreements are not necessarily in financial distress.

“Understand, though, that even the most successful pot stocks have been partaking in sale-leaseback agreements,” the commentary states.

Founded in 2013, Cresco Labs is involved in growing, processing and retailing marijuana for medical and recreational uses. Formerly privately owned, Cresco became a public company last fall, and is now traded on the Canadian Securities Exchange.

Since the beginning of 2019, Cresco stock has lost about a quarter of its value, reflecting an overall decline in “pot stocks.”

In Yellow Springs, the company is an important piece of the local economy, according to Chamber of Commerce Director Karen Wintrow.

“They employ Yellow Springs residents, and they pay income and property tax. And they’re active in the community,” she said.

The company currently employs 50 people, about 10 of whom live in Yellow Springs, according to spokesman Erkes.

And Cresco is presently advertising up to a dozen additional jobs, for a total employment of about 62.

Once those positions are filled, the company will be “appropriately staffed,” he said.

Jobs with the company range from gardeners and cultivation experts to sorters and packagers. Most are hourly, with fewer than 10 positions salaried. All but one of the existing jobs are full-time positions, according to Erkes.

In October 2018, the company finished construction on 25,000 square feet of marijuana cultivation space in Yellow Springs. Its first harvest was announced in January 2019. Erkes said that because Cresco is a public company, he couldn’t specify cultivation volume.

Two additional greenhouses have recently been built, and are awaiting inspection this month to go online, he stated.

But the company is not currently planning to build a second 25,000 square-foot cultivation space, as previously envisioned. In part, that’s because Cresco was turned down by the state in 2018 for a processor license, after previously receiving an Ohio cultivator license. State documents show that the company’s security plan failed to meet the minimum required score.

Cresco had intended its Yellow Springs facility to be a medical marijuana cultivation and processing operation, and previous capacity and job projections were related to that plan. CEO Charlie Bachtell told the News in 2017 that at full build-out, the company would have 125,000 square feet and employ 125 full-time workers in Yellow Springs.

Whether the company will reach that level of build-out locally remains to be seen.

Cresco has appealed the state’s turndown of its processor license, and that appeals process is still underway, according to Department of Commerce spokesperson Whitaker this week.

“We have received the hearing officer’s report and recommendations. The Ohio Department of Commerce is currently reviewing the report,” she wrote.

The state does not have a timeline for completing that review, she added.

A processor license is required in order for the company to manufacture marijuana products such as oils, dermal patches and edibles for medical use. As a cultivator, Cresco is limited to producing dried flowers for vaporization.

Cresco successfully applied for a third type of license under the state program, a dispensary license. It currently operates one dispensary, in the northern Ohio town of Wintersville.

In other aspects of its local economic impact, Cresco will likely pay about $50,000 in property taxes for tax year 2019, according to an unofficial estimate calculated by Greene County Auditor David Graham this week. That amount is split among the county, township, school district and Village, with the greatest amount benefiting local schools.

Figures for its income tax contribution to Yellow Springs could not be obtained by press time.

Beyond taxes, Cresco has contributed to the local community through financial donations and employees’ volunteer service. Erkes highlighted donations this year of $10,000 to benefit area tornado victims, and $1,000 to the Dayton Foundation after the Oregon District shootings. Cresco employees have also volunteered at local nonprofits including Agraria, Home, Inc., Glen Helen and the World House Choir, he said. And the company was a Street Fair sponsor last year.

“We try to be a good corporate and community citizen,” he said.

Still taking shape is a profit-sharing arrangement under which Cresco would contribute a small percentage of local profits to community-based organizations, Erkes said. Cresco’s Yellow Springs operation “has not crossed the threshold to contribute to the profit sharing,” he wrote in an email.

And so far, Cresco remains the sole occupant on the former CBE property, now  a commerce park owned by the Village. Village leaders had previously voiced the hope that Cresco’s presence would attract other businesses to the site.

The Village is presently waiting on a decision from EnviroFlight regarding relocating to the property, according to Wintrow last week. If that company moves to the former CBE, about two-thirds of the 35-acre property would be occupied. A couple other Yellow Springs businesses have indicated interest in potentially moving to the site, Wintrow said.