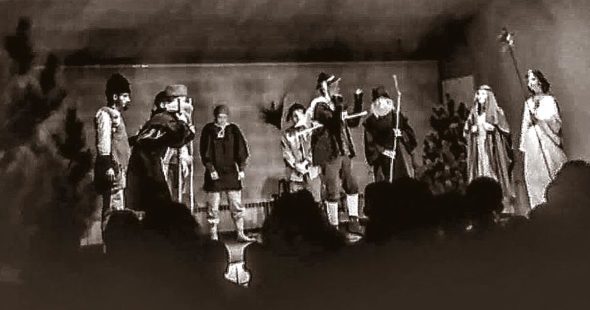 News archival photo of the very first Yellow Springs performance of “The Nativity and Shepherds Play” in Westminster Hall at First Presbyterian Church in 1962.

In 1962, Liselotte Stave, a native of Germany who had only recently moved to the village with her husband, Uwe, introduced a tradition of her own youth to the Yellow Springs community: that year, she directed “The Nativity and Shepherd’s Play.” Villagers donned robes, crooks and wings to play the shepherds, the angel, Mary and Joseph at First Presbyterian Church. The next year, the play was put on again, and was this time joined by a second play, “The Paradise Play,” which told the story of the creation of the world and the expulsion of Adam and Eve from the Garden of Eden. These two plays would be presented at First Presbyterian Church for another five decades.

Both “The Nativity and Shepherd’s Play” and “The Paradise Play” are examples of the mystery play or miracle play — a recreation of a Bible story, presented in tableaux in medieval times, and one of the earliest types of formal play. More than 600 years old, both plays originate from what was then the small Austrian-Hungarian village of Oberufer, now part of Bratislava, the capital of Slovakia. The plays were performed only in that area, along the Danube River, and passed down from memory as a form of oral tradition, until the 19th century. 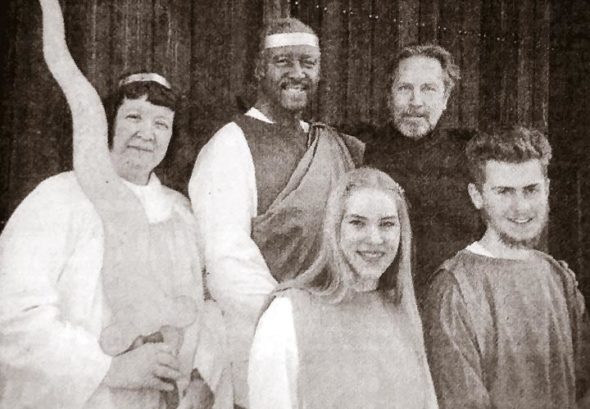 In the 1850s, Austrian linguist Karl Julius Schröer collected the plays in his folkloric studies. The plays were printed and distributed in the 1890s throughout Germany, and were then performed and enjoyed by a much wider audience; it was also around this time that music was added to the plays. An English translation was published by Cecil Harwood of The Inklings — the literary club that was frequented by such writers as C.S. Lewis and J.R.R. Tolkien — in 1944, and it was this translation that was performed in the village.

Stave first saw the play when she was 7; she told the News at the time that it was performed in her northern German school each year by teachers, and considered it “a German newcomer’s contribution to the observance of Christmas in America.”

“The play is very simple, but parts of it may sound strange if you don’t remember how old it is,” Stave said.

Stave continued to direct the plays until 1974 when she moved away, passing the torch to Ruth Bent. The community formed the YS Christmas Players to address the annual shows, though in 1977, the Players began performing the shows biennially. In 1987, the Players celebrated the holiday tradition’s 25th anniversary in Yellow Springs, inviting all 71 cast members who had participated to celebrate at Ruth Bent’s home after the production wrapped.

“‘I’ve been a shepherd in the Shepherd’s Play 13 times,’ said Tony Bent, husband of director Ruth Bent, who by now has his role fairly well committed to memory. ‘One never tires of this kind of thing, it seems to get richer and more satisfying somehow.’”

The plays were actually part of a trilogy, with the third, “Three Kings Play,” historically performed on Jan. 6, the day when the Catholic church observes the arrival of the wise men. “Three Kings Play” was never performed in Yellow Springs.

“It’s a fairly bloody thing — fake babies are stabbed and thrown around the stage, since it’s the story of the slaughter of the innocents,” said Ruth Bent in the Gazette article. “Somehow it didn’t seem very Christmassy.”

Some villagers retained their roles year after year — Siemer was a shepherd from the 1970s on, and Jim Felder is well-known in the village for having played God in “The Paradise Play” since the beginning. Throughout the years, many young actors sharpened their stage chops playing Mary and Joseph or Adam and Eve.

The plays were always performed the same way since 1962, following the Harwood translation. As times changed, however, the themes of the plays were viewed in a new light. In 2012 — an off year for the mystery plays — another group of villagers presented an updated version of “The Paradise Play,” entitled “Return to the Garden: A Ceremony for the New Time.” The updated version was meant to look past the themes of shame and punishment inherent in the story of Adam and Eve’s banishment from Paradise in favor of themes like rebirth, change and healing.

Though the plays were still beloved by a core audience who considered them tradition, as Ruth Bent wrote in a letter to the News’ Community Forum page in 2013, “traditions don’t always last forever.” In the letter, she announced that, 51 years after the Oberufer plays were first introduced to the village, the YS Christmas Players were retiring, and that the 2011 performance had been the last.

“Thanks to the many folks who came to the plays year after year,” she wrote. “We hope you have happy memories of the plays, as we do!”

One Response to “The Oberufer Plays— Remembering a holiday tradition”