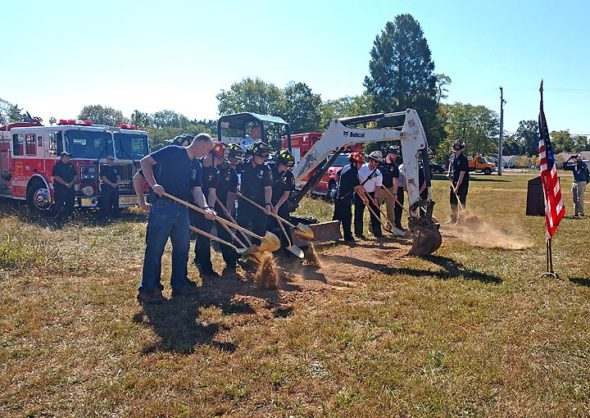 Miami Township broke ground on its $4.9 million new fire station on Xenia Avenue in September. Construction is slated to be completed by the end of 2020. (Submitted photo by Colin Altman)

Much of the focus of the Miami Township Trustees in 2019 was getting construction started on the new fire house at 1001 Xenia Ave., on the south side of town.

Voters approved a 2.4–mill, 30-year bond levy in May 2017 to build the $4.9 million project, but difficulties attracting bids that came within the budget requirements delayed the project. The government shutdown at the beginning of the year also delayed the process, as the township needed approval by the USDA, which guarantees the building loan, of changes in the design meant to reduce some of the building costs.

In April, the trustees changed their approach, deciding to bid out various aspects of the project — such as plumbing, electric and roofing — to individual contractors, rather than a single overall contractor who typically brings in subcontractors for the different pieces.

After redefining the project further and preparing new bid packets, the trustees welcomed more than 50 contractors and sub-contractors to a pre-bid meeting in early August.

With the project finally bid and contractors lined up, the township broke ground on the property Sept. 18.

Ground and foundation work continued through the fall, with an anticipated completion date being Labor Day 2020.

In other 2019 Township business news—

• In February, the three-member board changed the start time of their twice monthly meetings from 7  p.m. to 5 p.m., to help eliminate a longstanding meeting time conflict with Yellow Springs Village Council, which also meets on the first and third Monday of each month.

• The trustees agreed in March to change the PUD chapter of the township zoning code, eliminating the sections on business and industrial PUD-related development, as such development contradicts the township’s comprehensive land use plan. The trustees declined to eliminate the entire chapter, however, as had been recommended by the zoning board, because the trustees felt that having an alternative to single-housing options might be beneficial. The trustees also agreed, however, to continue discussing the issue with the zoning board.

• In June, the News reported that local first responders with Miami Township Fire-Rescue and the Yellow Springs Police Department were paying closer attention to the emotional and psychological toll of their jobs, devoting time to processing traumatic experiences with mentors and counselors.

• Running unopposed in the November general election, Chris Mucher was re-elected to his sixth full four-year term as a trustee, and Margaret Silliman was returned to her sixth term as fiscal officer.