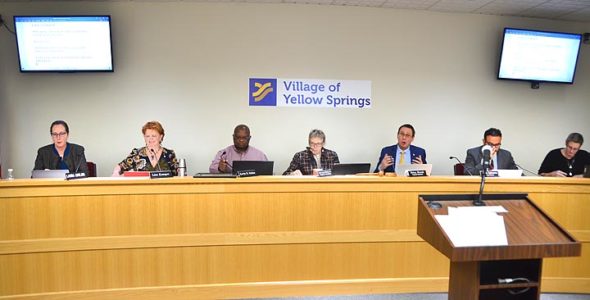 The debate came during the discussion of a resolution reaffirming the Village’s housing goals.

The goals Curliss challenged the development of affordable and rental housing on the Village-owned Glass Farm and the creation of a stock of permanently affordable housing in town through subsidies and other strategies.

Other goals are to continue revising a housing plan and collaborate with local entities such as Antioch College and Home, Inc.

Earlier in the meeting, when the agenda was reviewed, Curliss asked that the housing goals resolution be tabled until after Council’s Jan. 15 retreat. However, Curliss’ motion did not get seconded and failed.

“There’s a lot in here I’d like to unpack at the retreat before I vote for it,” Curliss said.

Later, during the discussion, Curliss expressed her worries that the resolution commits the Village to subsidizing affordable housing.

“The word subsidies concerns me. I’d like to be clear about that,” she said.

In response, Council Vice President Marianne MacQueen explained that a subsidy refers to the gap between market-rate and affordable housing, which can be filled by donations, federal and state government grants or the Village, particularly through in-kind services.

“No, it is not implying that the Village is subsidizing it,” MacQueen said.

Curliss also said that the Village should re-think housing on the Glass Farm, whose soils she believes may not be suitable for development.

“I’ve never understood why it was a development target property,” she said, adding that its soils are highly saturated and similar to a wetland. She suggested that instead of housing, the Village should perhaps plant trees on the Glass Farm to address the climate crisis.

MacQueen defended the parcel’s use for housing and said that engineers have already looked at the property and come up with concept plans.

“It is not a wetland,” MacQueen said. “Yes, it does have a high water table, which is similar to the areas around the Glass Farm.”

On the issue of singling out affordable housing, MacQueen affirmed its importance in the context of a local housing market that won’t provide it.

Previously, Council passed a housing vision and values statement in late 2017 and housing goals in early 2018, according to MacQueen.

From the floor, Lauren Miller asked Council to wait to pass the goals until after a longer discussion.

“I think if one of five of you has some questions … I would encourage you, as a community member, to take that time and have those conversations in your retreat, and not to rush this right now,” Miller said.

But Council President Brian Housh did not think a pause was needed.

“Personally, I feel like Council is committed to moving forward in this direction,” he said.

Housh later added that the resolution doesn’t mean Council can’t explore some of Curliss’ concerns, but that the idea of the Glass Farm as a site for affordable housing is a longstanding one.

“I think we’ve always recognized this is an opportunity for affordable housing,” he said.

Council passed the resolution adopting the goals in a 4–1 vote, with Housh, MacQueen, Lisa Kreeger and Kevin Stokes voting for the measure and Curliss voting against it.

Kreeger, who has led the effort working with the YS Community Foundation as the convener, said the new group will help local governmental entities communicate more effectively and “take action in ways that optimize scarce resources.”

“To deeply and thoughtfully collaborate and coordinate and plan together is a great opportunity for our community,” Kreeger said.

At the end of his first six months on the job, Village Manager Josué Salmerón was given praise and a raise at Council’s first meeting of the year.

Housh highlighted Salmerón’s “commitment, his energy, his digging into things” and said he was glad that Council hired him.

Housh, along with MacQueen, had reviewed the manager’s performance in recent weeks.

Salmerón’s six-month performance review is not yet publicly available because it has to be finalized, according to the Village this week. He is in the midst of a three-year contract.

MacQueen added at Council that Salmerón was hired in part because of his youth, diverse background and anticipated “out of the box thinking.”

“I appreciate how you get things done, I appreciate your approachability,” MacQueen said.

From the floor, Mitzi Miller thanked the Village manager for “his professionalism, his fairness and his willingness to take a look at situations.”

“I encourage citizens of Yellow Springs, if you have concerns, that you make an appointment with him. He’s more than willing to talk with you,” she said.

Council Clerk Judith Kintner was given the same raises, along with another three-year employment contract. Per her contract, Kintner’s 2020 salary is $55,361.59. Kintner has been clerk since 2010.

Council members noted Kintner’s passion for, and understanding of, the village and her support of Council members. Her role in the most recent Village manager search was highlighted.

“I appreciate your patience, your candor and your love and concern for us as a group,” Stokes said.

Council unanimously approved a resolution amending the Village’s agreement with medical marijuana producer Cresco to allow them to emit light from their greenhouses as late as 7 p.m. Previously, the agreement stated that blackout curtains be used at 5 p.m. to avoid light pollution from the facility.

Salmerón reported that over the last 18 days, during which time Cresco had been provisionally permitted to close their blackout curtains later, at 7 p.m., the Village did not receive any complaints about light pollution.

Salmerón read an advisory from the U.S. Homeland Security Department related to increasing tensions with Iran. The advisory is in effect from Jan. 4–18, 2020, Salmerón noted.

Council’s next regular meeting is Tuesday, Jan. 21, at 7 p.m. in Council chambers.