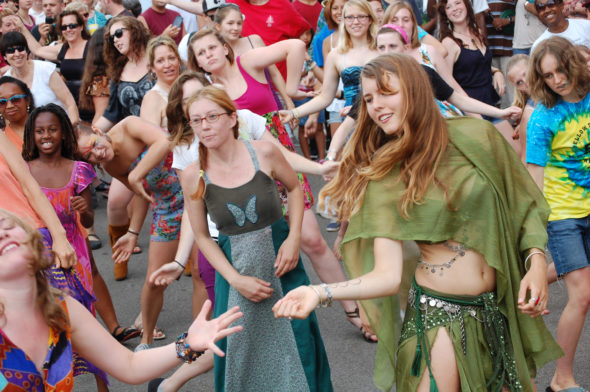 A flash mob showed up at the June 2011 Street Fair. Another flash mob was organized a few weeks later as the village vied for the title of “most fun town” in the country. (Photo by Aaron Zaremsky)

The Decade in Review: Village Life

• In 2010, the News noted the proliferation of local guesthouses to accommodate overnight visitors and profiled six places.

• Friends Care Community withdrew its proposal to build a three-story senior apartment “passive house” building on the Barr property downtown at the corner of Xenia Avenue and Limestone Street in 2010. It invested in a new rehab unit at its Herman Street campus instead.

• The News reported in 2011 that although housing prices declined in nearby communities during the subprime mortgage crisis, they stayed steady in Yellow Springs. In Greene County, home prices fell 5.6% but were flat in the village.

• In 2011, villager Don Cipollini sounded the warning that, without treatment, all of the town’s ash trees would succumb to the Emerald Ash Borer in a few years. While a few ash trees were saved, most local ashes died.

•  Yellow Springs was one of six finalists in a Rand McNally contest for “Most Fun Town” in 2011 in a field of 600 nominees. In the end, the honor went to Glenwood Springs, Colo.

• The popular underground breakfast spot run by Norah Byrnes was shut down in 2012 after zoning complaints. Byrnes had been serving breakfast to friends and neighbors from her Walnut Street home five days a week for a year-and-a-half by donation only.

•  In 2012, YS Pride was initiated in the village as an annual celebration of the town’s LGBTQ+ community. 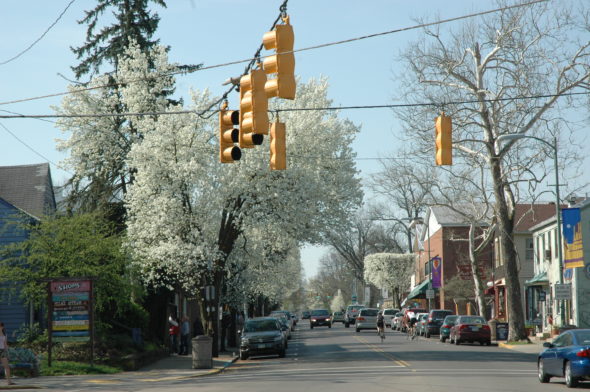 A downtown scene from Spring 2012, before the (invasive) Brafdord pear trees that once lined downtown Xenia Avenue were cut down as part of a streetscape renovation. (Photo by Megan Bachman)

• In 2012, Ellis Park was re-dedicated the Ellis Park and Lloyd Kennedy Arboretum in honor of the local planter of trees and founder of the YS Tree Committee. Kennedy died in 2017.

• In 2012, GreeneCATS expanded its fleet of buses to include a new Yellow Line, which started coming through Yellow Springs 16 times a day on its 90-minute loop between Xenia and Fairborn.

• A Home, Inc. plan to build affordable senior housing on the Barr property fell through in 2012 after it failed to get tax credit financing.

•  The first adult prom was put on in Yellow Springs in 2013. Organized by the Yellow Springs Browns Backers as a fundraiser, two other proms were held.

• The Yellow Springs Community Council disbanded in 2013 when its main source of revenue, the United Way, cut its funding, money that went to local nonprofits. The group was started by Arthur Morgan. Pam Conine was its final president.

• NAMI Yellow Springs formed in 2014 and started local peer-led groups for those living with mental illness and their families. It also spearheaded local mental health first aid trainings and education.

• The Greene County Health Department closed down Byrnes’ second attempt at a community breakfast in 2015. Byrnes was offering a weekly breakfast on Tuesdays at the Yellow Springs Country Bed and Breakfast, again free of charge.

• In early 2015, more than 200 people attended a “die-in” at the Beavercreek Walmart to protest the shooting by police of John Crawford III, an unarmed black man, sixth months earlier. Organized by villagers, protestors shut down the store for two hours. Four were arrested.

• The 365 Project started hosting walking tours of local black history sites led by local youth trained as tour guides in 2015. The group continued to hold forums on the experiences of youth, elders and others in Yellow Springs.

• The local Lions Club shut down shop  in 2015 due to declining membership. The social and service club was formed in 1951.

• In 2015, the YS Community Children’s Center saw its enrollment plunge following abrupt staff changes and financial shortfalls. New leadership and initiatives stabilized the center over the next few years, although fewer local children were attending, the News reported. 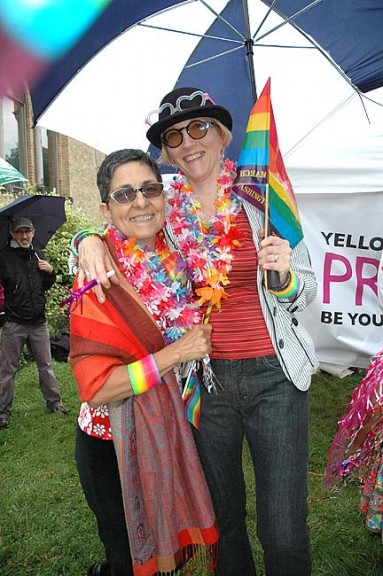 YS Pride parade participants Carmen Milano and Bronwyn Reece were all smiles at the event in 2015, held the day after the historic Supreme Court ruling made gay marriage legal throughout the country. The couple were married the year prior in Indiana. (Photo by Diane Chiddister)

• At the end of 2015, the “trash tree” drew ire from some local shopkeepers. Yellow Springs Zero Waste group erected the Christmas tree made of garbage bags to draw attention to the need to reduce waste during the holiday season. Unidentified vandals destroyed the tree.

• In early 2017, 90 villagers showed up at the local US Bank to protest the company’s investments in the Dakota Access pipeline on the Standing Rock Reservation in North Dakota. An effort to persuade the Village to pull its assets from US Bank proved unsuccessful.

• Community Solutions purchased 128 acres of land in the Jacoby Greenbelt just west of the village during a land auction in 2017. It preserved much of the property and established the Agraria Center for Regenerative Agriculture, a site for agriculture, research and education. Farmers were working the land and school groups regularly visiting the site, the News reported in 2018.

• Two restorative justice conferences were organized in the village in 2017 and 2018 by Jennifer Berman and Jalyn Roe. The second focused on sexual and family violence.

• After four suicides in and around the village during the first few months of 2018, NAMI, the Mental Health Recovery Board and local police teamed up to share resources to prevent suicide here.

• In 2018, the News reported that housing prices here were more than twice as much as the surrounding area and were rising faster than local incomes. Locally, average home sale prices increased 81% between 2001 and 2017, while median household incomes rose only 21% in about the same time frame.

• A free resource for the uninsured and underinsured, a free clinic was opened in 2018 in Yellow Springs by Reach Out of Dayton and held on Tuesdays at Central Chapel AME Church.