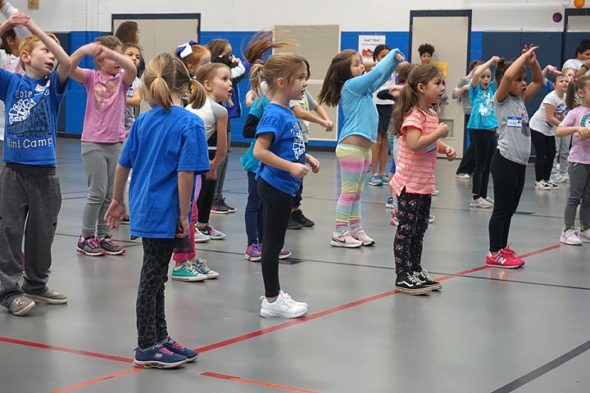 The YSHS cheerleading team conducted a mini cheer camp this week for kindergarten through sixth graders at Mills Lawn gym. The camp culminates in performances during half time at the varsity girls basketball game Thursday, Jan. 30, and the varsity boys game Friday, Jan. 31. Pictured is freshman Sophie Clause-Taylor assisting first-grader Audree Livingston with the “downward V” stance. In the foreground is kindergartener Ellie Borger and behind them is Jada Bratenstein. (Photo by Carol Simmons)

The call and response is not a question.

It’s a declaration. An affirmation.

Cheerleaders past and present will recognize the exhortation as a signal to be in place, focused and prepared to present their full energy in support of their school.

Members of the Yellow Springs High School cheerleading team and their coaches spent Sunday afternoon, Jan. 26, in Mills Lawn gym, leading a  mini-camp for kindergarten through sixth graders in the basics of cheering.

With a heavy gray sky spitting icy rain outside, 36 “littles” filled the school gym Sunday, some more ready and OK than others. Emotions ranged from exuberant excitement to cautious uncertainty to a few nervous tears as parents deposited their children for the three-hour session.

Working to create a positive, upbeat mood, coaches Naomi Hyatt and Olivia Dishmon had set up a laptop computer to play a KIDZ BOP collection of child-friendly pop songs while participants met their assigned “bigs” and decorated their own name tag.

Most of the 19 high schoolers on hand wore white T-shirts with the words “Disciplined,” “Athletic,” “Leader,” “Fearless,” “Performer” stacked atop each other in black letters.

The descriptors reflected the attributes that Yellow Springs cheerleaders have determined most define their sport and their role, which extends beyond game-day sidelines to the culture of the school community.

A chorus of yeses answered, accompanied by a few irrepressible skips and hops.

“Anyone a little scared?” Hyatt asked.

This response was a little more muted, with a bit of shuffling and downturned heads, but some definite yeses.

“It’s OK to be a little scared,” Hyatt reassured.

“Let’s get in a big circle and stretch our bodies,” she segued cheerfully.

The budding cheerleaders practiced by going around the circle and using their big voices to say their name and grade. “Bigs” spoke up for a few younger partners still feeling a little shy.

Then came a period of stretches, putting the physicality of the activity front and center.

“We work out and train at every practice so that our kicks are high, jumps are strong and (the cheerleaders) have the stamina to stand, dance and shout during the 90-minute games,” Hyatt explained in a follow up conversation Monday.

When it comes to movement, “we’ve got to do some special things for cheerleading,” Hyatt told the mini-camp participants Sunday, going on to demonstrate a handful of basic moves.

There’s the “upward V,” with arms raised in a V shape above the head, and its counterpart, the “downward V,” she illustrated.

There’s also the “T,” with arms stretched out to either side, or a “broken T,” where elbows remain up and the forearms bend into the chest, looking a little like a pair of wings.

The “right punch” throws the right arm into the air with a fist shaped like “a cinnamon roll.”

Then there’s the “Clean,” which means standing with hand down to your side, and the “Dirty,” calling for hands on hips.

Cheers also can include claps and snaps, Hyatt said.

“I don’t know how to snap,” came a little voice from the gym floor.

With the introduction to fundamentals, the group was ready to learn its first cheer.

The littles, a majority in first and second grade, thought it through, sounding out the letters in their heads.

The name of a cheer, and its primary message, Hyatt demonstrated: “L-E-T-S-G-O/ Bulldogs/ Let’s go!”

On the L, you raise your right arm above your head and extend your left arm out to the side, making an “L” shape from an observer’s view.

On the E, you transition to the T, where you assume the T position.

Arms are lowered into a downward V on the word “Bulldogs.”

Two beats follow, marked by a clap and then crossed forearms.

Finally, the closing “Let’s go” is punctuated by an upward V.

It’s a lot to remember and keep straight for a seemingly simple cheer. The littles were divided into smaller groups to practice with their bigs.

“There’s a lot of memorization that goes with cheering,” Tahlia Potter, a sophomore on the high school squad, said during a snack break later in the afternoon.

“I think that the athleticism, dedication, and memorization skills that go into being on cheer is highly underestimated,” she noted Monday.

The Yellow Springs varsity team, which has 10 members, learns about 75 cheers, while the junior varsity squad, which numbers at 13 this year, learns about 45, according to Hyatt.

Potter said she likes the athleticism of cheering, and thinks the mini-camp is a good idea in that it introduces the sport “at an early age,” and perhaps dispels some negative stereotypes about being a cheerleader.

Senior Nya Brevik, who moved to Yellow Springs this year, said she hadn’t done any cheering until becoming a Bulldog.

She said the activity has bolstered her confidence, not only in a new school, but also in general.

“Starting out, I didn’t have the confidence … to do things in front of other people, to just be loud,” she said. She does now.

A variety of reasons inspired the Mills Lawn students to attend the mini-camp.

Lilly Brown, a second grader with a large white bow in her hair, said she likes doing the cheers because “it’s really fun and you get exercise.”

“I just always like to see an audience,” she said. “I’ve always liked acting and cheerleading since I was 3 years old.”

Hyatt said her hope for the camps is that the participants “learn, have fun, and feel the positivity that our squad tries to embody.”

That positivity is part of why senior and varsity co-captain Chanel Phillips said she loves being part of the team.

“I just love it,” Phillips said. “I love the support” squad members give each other and the athletic teams they cheer for.

“We get to pump up the crowd,” she said.

Phillips said she hopes the mini-camp participants come to love the sport as well, “and want to cheer when they get older.”

A repeat attender, second-grader Eva Moore, said that being with friends was part of the draw for her.

Third-grader Ainslee Roe came because her older sister, Hailey, is on the high school squad, and “she thought it was really fun.”

Her friend, Mailini Miller, came last year, too. “I like the cheers. I like the kicks,” she said.

“To do cheerleading, you get to jump up and down,” Ellie said.

“One time I was in a play, and I thought it would be fun,” Jacob said of performing in front of a crowd.

Two more cheers were on the afternoon agenda, with participants learning a series of moves for “Go! Fight! Win!” and a more complicated routine to accompany “Come on crowd/ Let’s get loud/ Yell go, go/ Bulldogs go.”

Hyatt’s instruction: “I want everybody to  be really brave and really loud.”

The coach said separately that she was pleased by the number of kids who signed up for this year’s camp, especially compared to the 17 who came last year.

Being a high school cheerleader is a significant commitment, Hyatt said, estimating that the team spends about eight to 10 hours a week between games and practices.

The varsity squad cheers for two to four games each week, including all varsity boys home and away games and all varsity girls home games.

Cheering for the girls “is something we started last year, and it has been incredible for our team to support their fellow female athletes — for many of the girls, it is their favorite part of the cheer season.”

The JV squad cheers at two games a week, including whenever the boys JV team plays.

“In addition to our more traditional practices, we schedule at least one team bonding per month,” Hyatt added.

Being a part of the team offers a lot of benefits, Hyatt said. But primary for her is  building confidence.

“It is amazing for me to see the squad grow over the season, bringing people out of their shell and allowing a safe space for all to discover and own their fabulousness on and off the court.”

She said that as the team grows and evolves, one of its goals is “to align with other school clubs to try to bring some of our squad’s positivity into the school and to other sports.” Noting that individual cheerleaders are involved in a wide range of school activities, Hyatt said they hope to help steward a sense of pride throughout the school.

The mini-camp not only offers a chance to introduce cheerleading to younger kids, but also “serves as an opportunity for our squad to strengthen their leadership skills,” Hyatt said.

The coach said her ultimate goal for the team members is that they go on in life with a deeper sense of self.

“I want them to understand that their voices have power — whether it be setting the tone of any environment with their positivity or making change.”