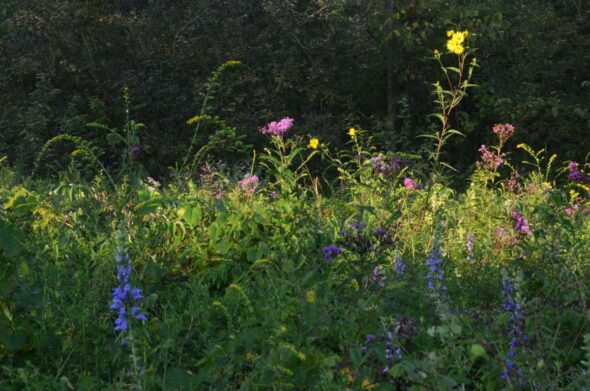 Wildflowers blooming in the Culbertson Fen, located in the Mud Run watershed. A fundraiser to help protect the watershed is happening Saturday, Feb. 29. (Photo by Carol Culbertson)

As described by the Mud Run Conservancy, or MRC, a local nonprofit, the Mud Run watershed consists of over 20 miles of waterways, as well as fens, wetlands and natural springs. Many local residents believe the area, located in Mad River Township, is under threat from proposed limestone mining operations.

A local fight against those operations has been underway for three years, while parallel efforts are happening to study, preserve and protect the waterways and watery lands that support varied aquatic, plant and animal life.

Some who grew up in the watershed have shared childhood memories of the Mud Run, a few of which are gathered on the MRC website:

In the 50’s and 60’s Mud Run was great fun for children growing up close by. Summer was a time for fishing. We caught sun fish, blue gills, yellow belly cat fish, bass and carp. We also liked playing in the creek trying to catch crawdads and frogs and sometimes getting out to find that our legs were covered with leeches. One summer my brothers gathered scrap wood, nailed it together to make a raft to float down Mud Run. Don’t think it worked quite as well as planned but did provide a lot of entertainment that year. … (Post from “Sally”)

Next Saturday, Feb. 29, the MRC is hosting a music fest fundraiser at the John Bryan Center in Yellow Springs. Crazy Joe and the Mad River Outlaws and seven other bands will play from 2 to 10 p.m. at the local community center. Music styles range from rock to swing to jazzy to oldies.

Suggested donation is $20 in advance or at the door. All funds raised benefit the Mud Run Conservancy’s preservation efforts.

Read a prior article in the News about the conservancy and the Mud Run watershed here.