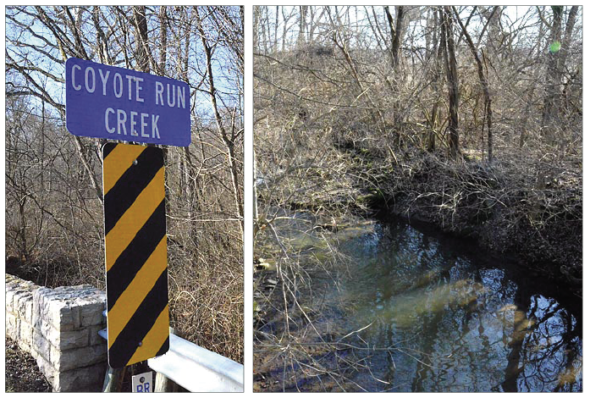 A formerly “unnamed tributary” to Mud Run Creek now has a name, Coyote Run Creek. The creek is pictured above where it flows under Fairfield Pike near Garrison Road in Mad River Township. A new blue sign denotes its name. The naming of the creek came thanks to the Mud Run Conservancy, which is holding several upcoming fundraisers in Yellow Springs. (Photos by Audrey Hackett)

A fundraiser to protect area waters

An “unnamed tributary” to Mud Run Creek recently got a name.

Yellow Springs, meet “Coyote Run,” an area waterway that bubbles up from the ground near Springfield Airpark, meanders for 4.1 miles through farm fields to join the Mud Run not far from the intersection of Garrison Road and Fairfield Pike, about three miles northwest of Yellow Springs.

“It’s large, but people don’t know it’s there,” area resident Kathleen Mathews, who helped the creek get its name, observed.

As it winds westward through Mad River Township, the creek flows under Little Miami Scenic Trail, South Tecumseh Road and Fairfield Pike. In each of these locations, there are new blue signs proclaiming the creek’s name.

Naming Coyote Run was one of the recent projects undertaken by Mud Run Conservancy, or MRC, an area nonprofit dedicated to “preserving, conserving, protecting and restoring the land and water resources in the upper watershed of Mud Run,” according to MRC’s mission statement.

To raise money for education and conservation projects related to Mud Run waterways, MRC is hosting two upcoming events at the Bryan Center in Yellow Springs. On Friday, Jan. 18, from 7 to 9 p.m., there will be a benefit concert and square dance featuring old-time and traditional country music band the Corndrinkers. And next month, on Saturday, Feb. 29, from 2 to 10 p.m., there will be a “rockin’ good music fest” featuring Crazy Joe and the Mad River Outlaws and seven other local bands. A $20 per person donation is suggested for each event.

“We’re grateful to these bands,” said organizer Mathews, who noted that the musicians are playing for free.

MRC also holds quarterly fundraisers at the Yellow Springs Brewery. The next fundraiser is Thursday, Jan. 23; YS Brewery will donate $1 for every pint sold between 7 and 9 p.m.

The focus of these events, the Mud Run watershed, is described on MRC’s website as consisting of over 20 miles of waterways, including Mud Run Creek, Clear Creek, the now-named Coyote Run, two minor tributaries, fens, wetlands and dozens of natural springs.

Mud Run Creek connects to the Mad River, and is part of the Greater Miami Watershed. Though located just a few miles northwest of Yellow Springs, that watershed is distinct from the village’s watershed, the Little Miami.

Mud Run Conservancy and its recent naming project were both borne out of an ongoing area controversy.

Over the past three years, area residents have banded together to oppose a planned 400-acre limestone mining operation in Mad River Township, fearing disruptions to water wells, lowered property values and harm to local ecology, including the area’s extensive network of waterways. A citizens group called Citizens Against Mining, or CAM, has led the effort to halt the mine. Though outside of the affected area, many villagers have lent their support.

CAM is distinct from MRC, according to Mathews and others. While many of the same individuals are involved, MRC is a 501(c)(3) nonprofit focused on preservation, while CAM is not a tax-exempt organization, and exists explicitly to fight the expanded mining operations in Mad River Township. CAM was founded first, with MRC formed a year later, in 2018.

“Even if we can’t stop the quarry, at least we can raise awareness about all the waterways in the area,” Mathews said of MRC’s mission.

Mud Run waterways are in need of protection largely because of potential threats from expanded mining operations, members of both organizations believe.

In early 2017, area residents learned that Enon Sand and Gravel, a local subsidiary of a Cincinnati-based company, was seeking state approval to modify and combine its mining permits in Mad River Township. The permit amendments added hundreds of acres to existing mining operations, as well as allowing for deeper mining, a new blasting plan using explosives and the discharge of water and mining wastewater in a process known as dewatering.

Despite local opposition, Ohio’s permitting authority, the Ohio Department of Natural Resources, or ODNR, granted the amended mining permits in mid-2017. CAM appealed the decision through the Ohio Reclamation Commission, but the permits were upheld in mid-2018.

Meanwhile, the Ohio EPA designated four wetlands in close proximity to the proposed quarry, and requested additional documentation from Enon Sand and Gravel on how mining might impact the wetlands and related waterways.

Currently, Enon Sand and Gravel and the Ohio EPA are in communication regarding that documentation, which pertains to the first phase of a two-phase project. Pending an agreement between the company and agency, the Ohio EPA has not yet issued the relevant pollutant discharge permits that would allow the company to release water and mining wastewater into area waterways.

One of those waterways is the former “unnamed tributary,” now Coyote Run Creek.

The name came about as part of a “Name that Creek” contest organized by MRC last summer. Community members suggested names, and five were chosen by MRC members for students at Enon Primary and Indian Valley Intermediate schools to vote on. The winning name — the runaway favorite, with 365 out of 757 votes — recognizes the fact that coyotes roam the area.

The winning name was approved by Mad River Township Trustees, with consent currently being sought from Clark County Board of County Commissioners. Once that permission is in hand, MRC’s Mathews, who has shepherded the process, will submit an application to the U.S. Board on Geographical Names for final approval.

With it, Coyote Run Creek will begin to appear on official maps of the area.

The creek is little-seen but beautiful, according to Mathews, with a cresting waterfall visible just before the waterway glides under Fairfield Pike. It is also notable for harboring the redside dace minnow, a fish species that Ohio EPA officials documented when they inspected the creek in 2018. The small red-striped fish lives only in cold, clear water, and its presence is an indicator of a healthy waterway, according to information from the MRC.

The group would like to name other presently anonymous creeks in the Mud Run watershed, according to Mathews.

“If everyone sees these waterways — if they have a name — it’s much easier to want to preserve them,” she said.

The News will report in more detail on developments regarding limestone mining in Mad River Township in a future issue. A federal case brought by Enon Sand and Gravel against Clark County Commissioners regarding zoning issues on the company’s property was settled in late 2018, allowing the company to proceed with mining on some of its land. However, Enon Sand and Gravel has not yet begun to do so, according to CEO Dennis Garrison this week. In response to a question from the News, he wrote in an email, “Operations were limited to sales in 2019.” Zoning issues on other portions of the company’s township property are still pending.