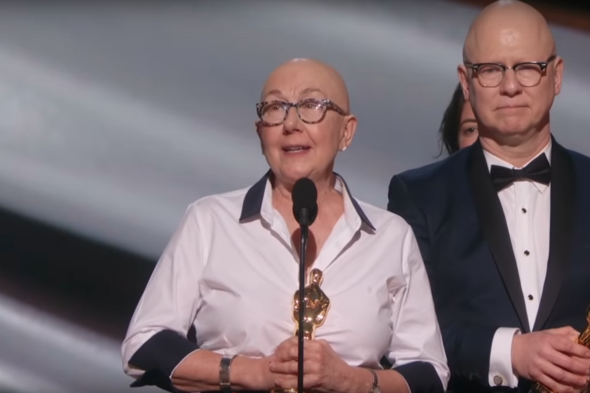 Julia Reichert and Steve Bognar accepted the Oscar for Best Documentary Feature for their film, "American Factory," on Feb. 9 at the 92nd Academy Awards.

“American Factory,” the documentary film by villagers and filmmakers Steve Bognar and Julia Reichert and Jeff Reichert, won the Oscar for “Best Documentary Feature” at the 92nd Academy Awards on Sunday, Feb. 9. The documentary was one of five nominees this year, up against “The Cave,” “For Sama,” “Honeyland” and “The Edge of Democracy.”

The documentary, which follows the lives of workers at the Fuyao Glass America automotive glass factory in Moraine, Ohio, was released last year by Netflix in partnership with Higher Ground, the production company of Barack and Michelle Obama. Former President Obama tweeted his congratulations to the production team during the awards show’s live broadcast:

Congrats to Julia and Steven, the filmmakers behind American Factory, for telling such a complex, moving story about the very human consequences of wrenching economic change. Glad to see two talented and downright good people take home the Oscar for Higher Ground’s first release. https://t.co/W4AZ68iWoY

Bognar and Julia Reichert were previously nominated in 2009 for their short documentary “The Last Truck: Closing of a GM Plant.” Fuyao Glass America operates from the same facility where the GM Plant was previously housed.

Accepting the award, Julia Reichert praised her fellow documentarian nominees, saying, “We are inspired by you guys.” About “American Factory,” she said, “Working people have it harder and harder these days, and we believe that things will get better when workers of the world unite.”

For a full story on the making of the documentary, which also won a directing award at Sundance last year, click here.

Watch Julia Reichert and Steve Bognar accept their Oscar below.