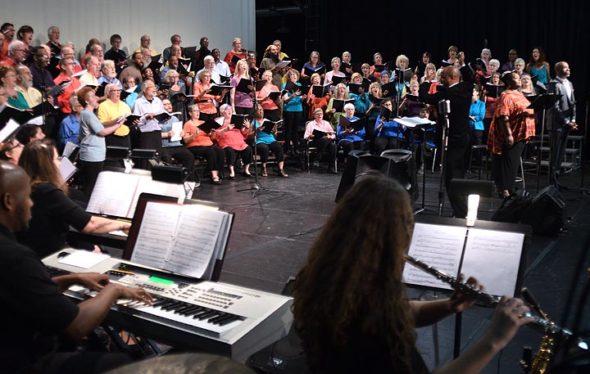 The World House Choir, pictured at its Sept. 8, 2018, performance of "Bayard Rustin: The Man Behind the Dream," will welcome new singers on Feb. 3. (Photo by Matt Minde)

The World House Choir, founded and directed by Cathy Roma, is welcoming new singers as the Yellow Springs-based group begins rehearsals for spring performances, including the world premiere of a new choral work.

Soprano and alto singers specifically are invited to join in preparation for the debut performance of “Lifting as We Climb,” commissioned in Roma’s name through an initiative started by MUSE, Cincinnati Women’s Choir, when Roma retired as that group’s founding director.

The 28-minute piece for soprano and alto chorus, alto saxophone, drums and piano will be presented in concert Wednesday, April 29, in the Foundry Theater on the Antioch College campus as part of the annual celebration of Coretta Scott King’s birthday.

“Lifting as We Climb,” by American composer Joan Szymko, celebrates the 100th anniversary of the ratification of the 19th Amendment, which gave women the right to vote. The work also features narrators and dramatic speakers playing the roles of Susan B. Anthony, Elizabeth Cady Stanton, Lucy Stone, Stacy Abrams, Sojourner Truth and others.

New singers to World House Choir are invited to attend an orientation Monday, Feb. 3, at 6:30 p.m., at the Foundry Theater.

Subsequent rehearsals will be at 7 p.m. Mondays, except for the second Monday of each month — Feb. 10, March 9 and April 13 — when the choir will host rehearsals at Sinclair Community College, in Dayton, in anticipation of a separate performance Thursday, April 23, as part of an area stop by the Rev. William Barber and the Poor People’s Campaign.

Regular rehearsals for the Coretta Scott King program will begin Feb. 17. While sopranos and altos work on the commissioned piece at the Foundry Theater, tenors and basses will rehearse two additional selections for the April 29 performance. Under the direction of Danielle Steele and Christopher G. Smith, the lower voices will learn “Make Them Hear You,” from “Ragtime,” and “Do You Hear the People Sing,” from “Les Miserables,” meeting at the Coretta Scott King Center at the same time as the soprano/alto chorus.

Singers on “Lifting as We Climb” must attend seven rehearsals leading up to the April 29 Coretta Scott King celebration.

Childcare is offered on-site at all World House Choir rehearsals.