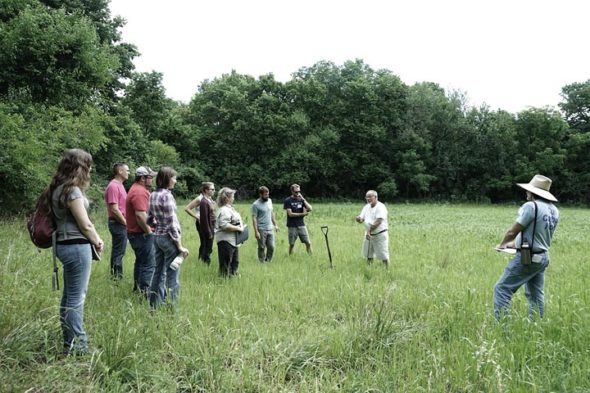 Those topics and more will be explored at “Growing Green 2020: Investing in Conservation and Local Food,” a joint conference of the Tecumseh Land Trust and Community Solutions. This year’s shared event, the third annual, is supported by the Yellow Springs Community Foundation.

According to Community Solutions Executive Director Susan Jennings, the event will highlight the critical role of local food in an unstable world.

“In an era of pandemics, climate change and trade wars, the redevelopment of local food systems is moving into center stage as a key strategy for community resilience,” she wrote in an email this week.

Tecumseh Land Trust Director Krista Magaw also sees threats to water quality and rising food insecurity as local challenges that need to be overcome. At the same time, there are myriad opportunities to “keep more of our food dollars close to home” and “be land use smart,” she said.

“Our area is blessed with prime soils and abundant water — investment in new food and farming practices now will benefit the nation and world,” she noted.

Climate expert Aaron Wilson of Ohio State University will give a free and open keynote talk on Friday, March 13, at 7 p.m., at Antioch College McGregor Hall.

Wilson, an atmospheric scientist and climate expert with OSU extension, will speak on “Climate Change, Agriculture and Adaptation in Ohio.” His talk is followed by a panel of local farmers sharing how they are adapting to climate changes.

Also free and open to the public is a pre-conference field trip to a family farm “in transition” in Xenia Township on Friday, from 2:30  to 5 p.m. The Finch Creek Farm is located at 1477 U.S. Route 68 South, Xenia, Ohio.

The conference is for local farmers, farm landowners and for advocates of local food and conservation, according to organizers, and part of the Jacoby Partnership, a regional conservation partnership program through the U.S. Department of Agriculture. For more information or for tickets, visit the Growing Green 2020 Eventbrite website.

An economist on future of farming

Reached by phone this week from his home in Fairfield, Iowa, Ikerd, an agricultural economist, addressed a range of issues he will speak on at the conference, from the problems of confined animal feeding operations, or CAFOs, to the opportunity of the Green New Deal.

“We need to move away from programs that are enabling the large CAFOs and multi-thousand-acre cropping systems,” he said.

Large single-crop farms and massive single-species livestock operations may be efficient, but they are economically risky, Ikerd explained. That’s where government programs like loan guarantees, disaster payments and crop insurance come in.

“The taxpayer absorbs the large share of that risk, while they make the profits,” he said of the current arrangement.

“We need to transition to where farm programs began in the ’30s — supporting farm families,” Ikerd said. “We could use the funds from the commodity programs to help farmers accommodate the climate and help new farmers getting started.”

One policy bright spot, Ikerd believes, is the Green New Deal, a proposed package of legislation to tackle climate change that was introduced in 2018 by Rep. Alexandria Ocasio-Cortez, D-N.Y., and Sen. Ed Markey, D-Mass. Despite not gaining legislative traction, it is becoming an increasingly popular policy platform. Ikerd will address it in his talk.

Other promising ideas involve the local food movement capitalizing on the food delivery trend and the creation of “public utilities” to both address food insecurity and support small farmers, according to Ikerd.

“A public utility starts on the basis of feeding people, which the markets haven’t done,” he said, citing figures that show 11% of Americans — and 14% of American children — are food insecure.

By leveraging government food assistance funds, a local food public utility could provide food to those in need as well as paying customers.

“This way, you ensure your community has nutrient-dense, healthy food produced in an environmentally friendly way,” Ikerd said. “And you provide a stable, economic foundation for local farmers.”

Finally, Ikerd rebutted the industry talking point that industrial agriculture is needed to “feed the world.”

Ikerd cited studies that some 70 to 80% of the people in the world today are already fed by small family farms, while agro-ecology methods have been proven to double or triple the yields of farming systems.

However, growth in the local food movement has slowed from its rapid rise in the 1990s and 2000s, Ikerd noted, which is why new policies and projects are needed.

“Any time local farmers or organic farmers have an idea and it becomes profitable, the big operations come in and take it over,” he said.

*The writer is a newly elected board  member of Community Solutions.