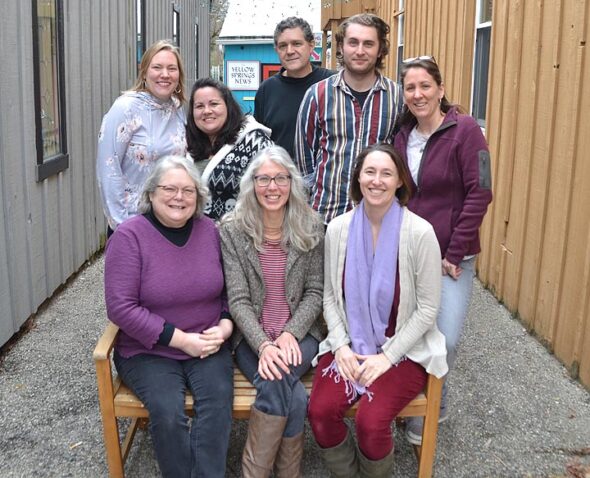 Our full-time staff— Who’s the News?

We at the Yellow Springs News are not used to writing about ourselves. After all, we tell the community’s stories, not our own. But in the spirit of transparency, we’d like to introduce ourselves anew to our readership.

In the coming months, we plan to take readers behind the scenes at the News and answer questions like: How do we decide what to cover? What are our editorial policies? What is the process for assembling each week’s paper? We’ll also dig up some interesting history from this 140-year-old local institution and respond to reader questions.

Here we introduce you to the full-time staff of the paper. In future weeks, we’ll profile our part-time employees and columnists.

Lauren “Chuck” Shows is village desk editor at the YS News, which means a number of things. First and foremost, she compiles and edits incoming submissions from villagers — announcements, column items and letters to the editor — for the paper each week. She also occasionally writes columns (“Thought for Food,” “All I Care to Eat,” “Sorry, I’m Not From Around Here”) and feature stories for the News, answers phones and does some light accounting. She is often the de facto orderer of office food for the News, a job she takes very seriously.

For those who’ve wondered: “Chuck” is the moniker she was given so that she wouldn’t be confused with the late Lauren Heaton, the Original Lauren and a village institution. The nickname was suggested in jest, but continued in earnest and remains in perpetuity.

Chuck is a native of Northwest Florida — a.k.a. “The Redneck Riviera” — and moved to the village in 2009, where she lives with her poet/professor husband Anthony and their 9-year-old daughter of many talents, Lucy. She earned her MFA in creative writing from Spalding University in Louisville, Ky. She was the co-host and editor of a recently ended Harry Potter podcast, “The Sorting Chat,” for two years, and occasionally produces stories for WYSO. You can find her in local plays sometimes and working projection at the Little Art every other Friday and Saturday.

Reporter Carol Simmons began subbing for various News staff members while writing freelance stories after retiring from Dayton Daily News in late 2013. During her 30-some years at DDN, she moved from circulation customer service to editorial clerk to news stringer to features writer and music critic to copy editor. She joined the YS News reporting staff full time in June 2017 and covers a variety of assignments, with an emphasis on local schools.

A Yellow Springs resident since 1991, Carol and her partner raised their three children here, enjoying the natural settings of Glen Helen, John Bryan and Clifton Gorge along with the varied arts and cultural offerings in the area.

Carol is active in the local Quaker Meeting as well as wider Quaker groups. She loves travel, music of all sorts, literature, the visual arts, theater, dance and film. Camping and hiking are favorite activities, as are enjoying good food and drink, exploring history and natural science museums and researching new subjects.

As a reporter, she most enjoys meeting new people doing interesting things and being able to share their stories with the community. She also aspires to bring forward the voices of community members who have been historically unheard or ignored.

Reilly Dixon began as a designer and production assistant at the News in April 2019 with great earnest and zeal.

He designs nearly all the advertisements you see in the paper, and he works alongside Matt Minde to lay out and visually arrange each individual page. In addition to massaging the aesthetics of the paper, Reilly will occasionally contribute an article or snap a photo.

Although he moved to the village just a few years ago with his partner, Sam, Reilly has always been Yellow Springs adjacent. He grew up in Enon, so he was only just a few cornfields away. He was an altar boy at St. Paul’s Catholic Church for nearly six years and spent much of his adolescence causing a ruckus in the Glen with friends.

Reilly graduated from Wright State with a master’s degree in English in 2018 — his thesis dealt with the wildly riveting topics of narrative structure and leftist theory.

When his nose isn’t pressed in a book, Reilly can be spotted out in his garden, fermenting his own wines, playing a game of fetch with his cat, or clumsily plunking away on his new piano. He also bartends at Ye Olde Trail Tavern on weekends — stop by for a pint and say “howdy!”

Since May 2019, Suzanne Szempruch has been the News’ advertising manager, connecting local businesses with the community, and vice versa. She is also the business manager, dealing with all things financial, and is one of three co-owners of the paper.

Suzanne was born and raised in Springfield and graduated from Shawnee High School. She went to Sinclair Community College for visual communications (aka graphic design) and photography. Suzanne started at Ertel Publishing as an intern and was hired in 2004 as a full-time designer and photographer. She moved to the village in 2009.

In 2011, Suzanne started working part-time at the News as a designer and photographer, while holding a supervisor position at Victoria Secret in Beavercreek. She went full time at the News in 2012.

Suzanne met her husband, Lucas, at the Village Greenery (then located in Kings Yard) and Mayor Foubert married the two soon after in their backyard on West North College Street in the summer of 2012.  After their first child, Abigail, was born in February 2016, the family moved to Pitchin, in Clark County. Hazel was born in May 2018. Suzanne then stepped back from production/design and took over classifieds and circulation for a short six months before adding advertising duties when Robert Hasek and his family moved to Portland, Ore.

Reporter and poet Audrey Hackett conducted her first interview when she was nine. Recorded (“taped,” as it was known then) by her mother, the interview was notable for reporting her mother’s favorite color and ’84 presidential pick. (“Earth tones” and Walter Mondale.)

Hired by the News in July 2015 and rehired in March 2019 after a year away, Audrey has covered a range of local issues and people, including Antioch College, Village Council, local business, environmental topics and the quirky souls who make the village a place of passion, contention and delight. She brings a background in community journalism and nonprofit communications, as well as a love of the natural world and the arts.

Audrey stepped away from the News in 2018 for a year to finish her MFA in poetry, which she earned in July 2019 from Vermont College of Fine Arts. In addition to reporting for the News, she writes a monthly poetry column presenting the work of local poets.

Audrey and her husband, Grant, a professional book indexer, have lived in the village since late 2012. They are happy to share their North High Street home with Skyler, a long-haired dachshund.

Megan Bachman is the editor of the Yellow Springs News and one of three co-owners of the paper, positions she has held since July 2018. She has been associated with the News since 2010, when then-Editor Diane Chiddister gave her a chance as a cub reporter. Megan subsequently fell in love with asking questions for a living, and at the News developed a penchant for data journalism and writing about music. After a leave of absence in 2016–17 following the birth of her second child, Megan returned to the paper full time in January 2018.

A native of Cleveland, Megan came to Yellow Springs by way of Miami University in Oxford, where a college instructor connected her with a job at Community Solutions, then on Whiteman Street. There she became inspired by Arthur Morgan’s vision of community and developed an interest in global energy issues. She went on to share her passion for the environment with students in various ecology courses as an adjunct at Antioch Midwest and Antioch University Online for eight years.

When not re-imagining the future of local media or attending local government meetings, Megan can be found listening to music or hiking with her husband, Joe, an assistant principal at Xenia High School, and their children, Pearl, 7, and Luella, 4.

Production/design director and co-owner Matt Minde came to the U.S. from Germany at an early age, and was raised with a critical eye towards both cultures. This provided a template to seek the good, leave the not so good, and find humor in the process.

Matt got into the newspaper business via the side door of cartooning. He spent four years at his college daily doing editorial and other single panel cartoons, as well as production and some writing. It ultimately paid off far more than his degrees in biology and music.

After 10-plus years as a typographer at a type studio and in-house designer at Alligator Records in Chicago, he moved to the Yellow Springs area with his wife, Jennifer Berman. In 2001, he was hired on at the News to take its production into the digital realm from a manual “paste-up” process, and in 2012 became a full co-owner.

Over his almost 20 years here, his passion for the unique role of the News in community cohesiveness hasn’t dampened. However, he still plays a lot of music, and the biology has come back to help with his kids’ schoolwork or the occasional discussion of ecosystems and other living things.

He lives — and is grateful to work — in the village with his wife and two children, Joseph, 17, and Eliza, 14.

Bookkeeper Jeanna GunderKline is a born-and-bred Springer; in fact, she was born at home on Herman Street when it was bordered by woods. Jeanna attended the Antioch School and was homeschooled before traveling the country on service jobs as part of Americorps National Civilian Community Corps.

Since returning to town, Jeanna has done her part to uphold the gig economy, working for six different local entities in everything from voice narration to teaching medical students communication skills. Jeanna is proud to currently be the longest serving concession staff member at the Little Art Theatre, a position she has held for the last 17 years.

About three years ago, Jeanna started at the News as a “super sub.” She has subbed at five different positions, from advertising to proofreading. She started assisting Peg Champney in 2018, and is now the full-time bookkeeper. She also lends her hand in classifieds and circulation, and keeps an impressively stocked snack drawer.

When not working, Jeanna enjoys quality time with her six-year-old son, Zander, game nights with friends and acting in theatrical productions in Yellow Springs and across the Miami Valley.