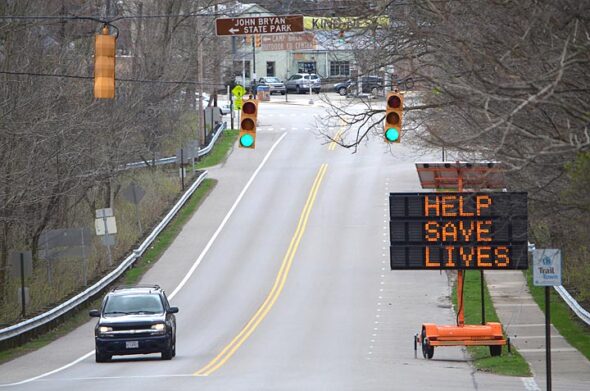 Earlier this week, the Village of Yellow Springs erected three electronic signs with public messaging at the gateways to town in an attempt to inform, and also deter visitors during the statewide “stay-at-home” order. After a throng of tourists visited the prior week, some flaunting social distancing rules, the Village, Glen Helen and the Chamber are discouraging visitors. (Photo by Megan Bachman)

EDITOR’S NOTE: The News is making all of its coverage on the COVID-19 crisis free and immediately available to the community. To support our work, please consider a subscription today. Click here to subscribe now.

The sun was shining on Yellow Springs last Wednesday, March 25. As temperatures climbed into the upper 60s, there came a familiar sight in an unfamiliar time — tourists.

Looking to get out of the homes they’ve been ordered to stay in to slow the spread of COVID-19, throngs of people arrived in the village, filling parking lots to capacity, wandering around town in large groups, lining the bike path and clogging Glen Helen’s trails.

At the same time, a 20-person close-contact, shirtless basketball game was underway at the Bryan Center outdoor courts, while skateboarders of all ages were largely able to keep their distance while grinding and tricking at the nearby skatepark.

For Glen Helen Director Nick Boutis, March 25 was the “straw that broke the camel’s back.” He had to make a decision he was hoping not to have to make — to close the Glen, effective the following day.

“We know how important the Glen is for physical, psychological and spiritual recreation, and wanted it to be available to the community,” Boutis said this week.

But faced with a steady stream of hikers along the Inman trail and seeing the risks to the Glen Helen ranger from having to scold stream swimmers and break up large groups, Boutis said he “knew the decision that we didn’t want to make was what we had to make.” That is, to restrict access to the village’s 1,000-acre nature preserve.

“None of this feels good, but if we do our part to make a difference and shorten the duration of this plague, I think it’s vital that we do that,” he said.

Then, as the weather on Thursday reached into the low 70s, Village Police Chief Brian Carlson surveyed an increasingly dangerous situation. Visitors, and some villagers, were flaunting the Glen’s new rules. He saw two groups of people hoisting babies over the caution fence clearly marked “trails closed,” and a bike path so jammed with walkers and bicyclists that social distancing of at least six feet was “impossible.”

So Carlson decided to close all three municipal parking lots downtown, as well as the basketball courts. And on Monday, three electronic signs were erected on the edge of town with four messages, “Help save lives. Stay at home. Essential business only. Glen Helen closed.”

“I certainly don’t want to sound like we’re not welcoming in any way,” Carlson said of the decisions to restrict visitors. Instead, he said he was merely echoing the urgings of Ohio Gov. Mike DeWine.

“I need to express the importance and responsibility of only leaving home on an essential trip,” he said.

Carlson has encouraged the state to revisit its decision to keep state parks trails open, even as state park restrooms, campgrounds and lodges are closed. With John Bryan State Park and Clifton Gorge State Nature Preserve on the edge of town, more visitors are coming to, and through, Yellow Springs, endangering its residents, he believes. It’s a concern Carlson said is shared by police chiefs in the Hocking Hills region, which also continues to see an influx of visitors.

This week, Carlson cited an analysis by the Center for Rural Strategies showing that although rural counties in the U.S. have much lower rates of infection with COVID-19 than large cities, those counties that rely on a tourist and recreation economy have three times the infection rates of rural counties with another type of economy. That makes them more susceptible than small metropolitan areas, the analysis showed.

It’s increasingly frustrating for the chief, who is also trying to limit how much his officers approach people to warn them about their actions; so far they have given no written warnings or citations to those disobeying social distancing rules.

“I’m just at a loss how anyone can’t see the dangers in this type of behavior,” Carlson said.

Could the bike path, municipal parks or the skatepark be closed next? Village leaders aren’t ruling anything out.

“I have an obligation for the safety and the wellbeing of the community and everywhere,” Carlson affirmed.

At least one Village leader has questioned the decision to close municipal parking lots and local recreational outlets. Village Council member Laura Curliss said she worries that those with mobility challenges won’t be able to find a spot to park downtown, while closing parks could negatively affect people psychologically.

“The stress of the situation is starting to hit some people,” Curliss said. “I think being outdoors is incredibly important.”

Meanwhile, YS Chamber of Commerce Director Karen Wintrow was conflicted last week. Seeing how local businesses are suffering after dining rooms and nonessential shops were ordered closed, she thought some outside support might help those who remain open buffer their losses.

But the nice weather brought crowds on Wednesday and Thursday that were more akin to warm spring weekends, even with few downtown shops open.

“It was getting out of control,” Wintrow said. So she put out a new message to the chamber’s 6,000 email newsletter subscribers and nearly 60,000 Facebook followers:

“Honor the stay at home order. Practice physical distancing. Care for yourself & others. Visit us when this is over.”

Wintrow said she tried to keep the message positive, focusing on what people should be doing — staying at home — and not what they shouldn’t be doing — visiting Yellow Springs. Still, she struggles with the decision in hindsight.

“Am I doing the right thing, because in the long run, it is going to hurt our businesses?” Wintrow said. “I have to really examine that.”

Wintrow also believes that the governor is sending a mixed message. Although he ordered Ohioans to stay at home and only leave for essential trips, beginning on March 23, he has also promoted in his daily briefings getting out and enjoying nature.

“He’s still encouraging people to get out, at the same he’s saying to limit your activity,” Wintrow said. “It is a little bit of a mixed message. Is it OK to drive through Yellow Springs to hike in John Bryan? Or should you stay in your community?”

For Village Manager Josué Salmerón, the closing of recreational outlets was difficult, as it could be seen as “counterproductive to maintaining sanity and staying healthy.”

But Thursday was the tipping point. On that day, Village leaders were alarmed by the number of people in town, especially those who piled into cars to come here and who did not abide by social distancing in town.

“We don’t want to close parks. I don’t think anyone in the country wants to close parks,” he said. “But you have a group of people who are just not taking it seriously enough.

“We’re just trying to limit the density,” he added. “If folks could manage it themselves, we wouldn’t have to do what we’ve done.”

“This may seem controversial for the village, as we pride ourselves on being a welcoming community, but we find it necessary and prudent to take these actions in the interest of public safety,” he said. In fact, Salmerón sees them as essential to “flattening the curve” of infection.

“We have an opportunity to beat the model, to come in the low end [of daily cases], but that means we have to make some sacrifices,” he said.

For now, municipal parks remain open, including Ellis Park, Gaunt Park, Beatty Hughes Park, Bill Duncan Park, the Glass Farm wetland and others. Also open are the Village station public restrooms, in part because they continue to be used by the local homeless population, Salmerón said. Playgrounds were previously closed by order of the state, and the Village had already closed the Bryan Center to visitors.

Although Salmerón believes that the state’s order to “stay at home” is clear, some other governmental messages are not. For instance, Greene County Parks & Trails promoted “National Trail Day” on Monday with a message to get out to a county park. Salmerón contacted the agency with his concerns, and they later followed up with another message:

“Even though parks are being promoted as a place for fresh air and mental well-being, we HAVE to be smart in our decisions if we want to win this battle and keep the parks open!” the message read. “Social distancing applies in nature as well! If you arrive at a park and there are numerous cars in the parking lot … move on! Go somewhere else.”

Greene County Parks & Trails Director Jon Dobney said he believes county parks can be safe for visitors. They’ve taped off playgrounds and fitness areas, closed the Xenia dog park and canceled all events and reservations through April. But hiking trails remain open at 27 county parks, which total around 3,000 acres, as do 62 miles of paved bike trails.

“We have lots of room, if people just use their heads,” Dobney said. “It is good to get out and take a hike, and the trails are open.”

Dobney said the agency is pushing a stronger message on social media about social distancing at the parks, especially as the weather warms up. In addition, they are telling visitors not to use handrails or lean on fences. He said the agency is taking its guidance from the governor’s office.

“At this point, we don’t want to close anything because this is an outlet for people,” he said.

Salmerón thinks that as the crisis intensifies, and more people become infected, that may change.

“There is no talk of closing down the parks and trails but I think it’s a matter of time,” he said.

Miami Township Fire-Rescue Chief Colin Altman has urged people to use common sense when abiding by the governor’s suggestion to get out in nature.

“Don’t get into a car with eight people and drive 22 miles to a neighborhood county’s park,” he said at a recent Virtual Town Hall. “Stay local, stay outside if you want.”

“If hiking is your thing, discover a path in your backyard or down the street,” he said.

Boutis agrees, citing how blessed Yellow Springs is to have streets with relatively low foot and vehicular traffic. He also urged people to use local parks at off times when they can.

“Be a little bit contrarian about when you take your constitutional.”