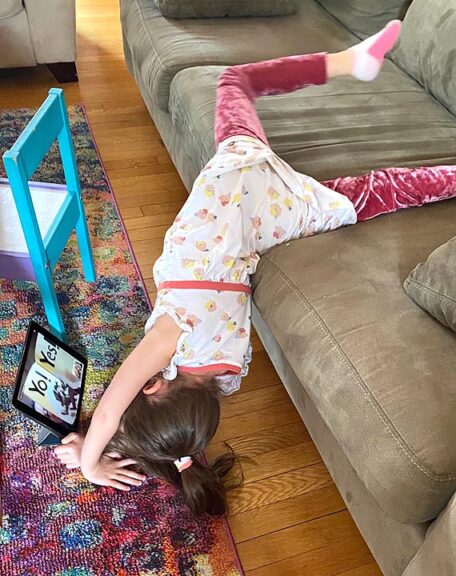 The Antioch School community is used to working things out together. The nearly 100-year-old institution is well-known for collaborative learning and play and engaging with nature; students learn to lead themselves, but also to work closely in tandem with their classmates and teachers.

Communities of all sizes and natures have had to redefine what it means to be together in the long weeks since the coronavirus pandemic has forced people to remain physically distant. The Antioch School community is no different in this regard, and has worked together — from a distance — to maintain the closeness at its core.

“My first thought was, ‘How is this going to work?’” said Lisa Varandani, whose daughter, Antonia, is in The Antioch School’s Kindergarten class. “How does hiking outside or playing in a big dirt pile or making art together work on the computer?”

This question loomed large for the Antioch School community — when things are operating normally, the school is largely screen-free, so moving toward a screen-only environment was an adjustment for all involved. Though the medium has changed, Kindergarten teacher Lindie Keaton said the school’s mission remains the same.

“Our question has always been, ‘What does this child and this group need to keep growing as their best selves?’” Keaton said. “That’s still the question — it’s just more challenging because the medium is inherently inferior.”

Nevertheless, the school has jumped with both feet into the use of available online media, using a variety of applications to stay connected. Teachers post daily read-aloud videos for their students using the video app Loom; students and teachers can post content and comments on the collaborative work app Padlet; and classes meet together on the videoconferencing app Zoom.

“We’re doing it in a very Antioch School way — all the teachers had to learn the technology on the fly,” said School Manager Nathan Summers.

“It was fun to watch the kids learn how to do it,” according to Audra King; her daughter, Ayla, is in the Kindergarten class. “At first, [Keaton] was having to do a lot of muting, but now they’re all old pros.”

School Manager Summers stressed that all of the options the school presents — meetings, videos, independent and group work — are optional for students.

“We’ve essentially presented a menu of options to families,” he said. “Engagement with the options depends on the family, and different families are feeling the need to prioritize different things.”

King’s daughter Ayla has attended many of the online Kindergarten meetings that Keaton offers, and she said she appreciates the programming’s flexibility.

“The last thing parents and kids need right now is pressure,” she said.

Varandani’s daughter is also a regular at the online meetings, but the novelty of online classes has mostly worn off for her.

“Overall [Antonia is] happy,” Varandani said, “but there have been a couple of times where she says, ‘All we do is talk!’ — she wishes she could be there in person.”

Keaton echoed Antonia’s sentiment — “This is the job I want to do, but it’s not the way I want to do it,” she said — and she emphasized that, even though online schooling isn’t meeting all of the students’ needs, she isn’t worried about their education in the long term.

“Children are capable and strong,” she said. “I’m not worried that they’ll come back and not know things — they’ll learn, they’ll progress.”

All of the students at The Antioch School have continued, where they can, to participate in the democratic process at the school’s foundation. Even while physically apart, they sometimes still decide together what they’ll talk about when they meet online — Younger Group kids decided one class meeting should be devoted to animals, for example, and Kindergarten students asked that they be able to continue their “Comedy Hour,” a regular practice before schooling from home began.

A well-loved tradition at the school is its annual school musical; kids decide together what play they want to do, and they cast themselves, with the oldest kids typically getting first pick at the roles. This year’s musical choice is “Aladdin,” overseen by Older Group teacher Sally Dennis. Despite their physical distance, students continue to work to keep the sacred practice alive.

“Most of the work we’re doing in the Older Group is really individual,” Dennis said, “so the play is kind of the one thing they’re still working on together.”

“It’s really meaningful and important for them to have something to look forward to,” she added.

Rehearsals have proceeded online in groups of various sizes, even in the face of technical difficulties.

“The children are doing so well with it — despite the glitches and frustrations,” Dennis said.

One of the main difficulties of rehearsing a musical online is the lag time inherent in a video call. It’s nearly impossible to sync up a chorus of singing voices because of the varying degrees of sound delay from each computer. To this end, Dennis and her students have just rolled with it, lag and all.

“No, it’s not synced up,” Dennis said, laughing. “It’s crazy, but it’s so wonderful, because they’re just at home singing out loud by themselves, but we all get to hear each other.”

The students still hope to perform the musical in person; they’re shooting for July or August, and may perform it as more of a staged reading outdoors, still maintaining physical distance if required.

Graduation for the oldest students will also be held, but differently. Outbound students are celebrated by the friends they’re leaving behind at the school when May rolls around, and that won’t change. The school is working on a way to hold a virtual graduation ceremony. Younger students are putting together a video of memories for graduates, and each graduating student will receive a book created for them by younger students, as well as their traditional diplomas and T-shirts.

Still, none of this is what students expected from the end of the year. Dennis said the separation has been particularly difficult on the students who are leaving the school — they’re spending their last weeks as Antioch School students apart from one another, and they’re missing out on some elements of school traditions that they’ve been eagerly anticipating for years. She noted two students who will graduate this year who have been particularly entranced by the school musical since they were in Kindergarten — after that year’s musical, they convinced their entire Kindergarten class to perform a version of the Disney musical “Frozen.” They shared the main role of Queen Elsa and performed the iconic song “Let It Go” for classmates.

While administrators and teachers at all schools have concerns about meeting their students’ educational needs, as an independent private institution, The Antioch School must also concern itself with maintaining its funding. The school was set to hold its largest fundraiser, the Annual Comedy Gala and Auction, on March 14 this year. Just two days before the event, Gov. Mike DeWine announced that all gatherings of 100 or more people were canceled until further notice to help stem the spread of the coronavirus.

Summers said the gala event has not been canceled, only postponed, and will most likely be held next spring to ensure that it’s safe for folks to attend. Comedian Michelle Wolf, who was the scheduled headliner for the event, has agreed to return.

Aside from fundraising, the school also relies on tuition to keep the institution running — but with working families laid off or furloughed, Summers said that some aren’t able to keep up with tuition costs. He said the school’s Board of Directors decided early that those who are unable to pay tuition due to the pandemic will have those costs waived.

“These families are part of our community and we don’t want their inability to pay at this time to affect that,” he said.

The school hasn’t formulated a plan just yet about how it will facilitate tuition forgiveness. The Antioch School has applied for assistance from the Small Business Association through the Paycheck Protection Program, and when the funds are received, the school’s board will have a better picture of the financial situation.

Summers said the school has always suffered setbacks during times of recession — when income levels are impacted, new families are less likely to consider The Antioch School as an option, and family members with students already enrolled may need to make the choice to send their students to public schools.

Still, he said that this particular nationwide event may present new opportunities for The Antioch School. Summers has a child who attends McKinney Middle School, and said that he’s been pleased with the YS Schools’ approach to distance learning, but has heard that parents with kids in surrounding school districts haven’t always been as satisfied. He said this fact could attract new families who have been frustrated with distance learning methods.

“With our relatively smaller size, the fact that we have great access to outdoors on our school property and our curricular objectives, I think it does position us relatively well,” he said.

But Summers recognizes that these thoughts are speculative — “We don’t know what the world is going to look like in the fall,” he said — and that the school’s community members will need to continue to support one another. Community support is the proverbial light at the end of the tunnel for The Antioch School.

“I’ve been so impressed with our community overall,” he said. “We’ve had some people pay tuition early to help us cover our bills, and that kind of support is wonderful.”

“We have a real ‘we’re all in this together’ attitude, and I just feel really lucky to be part of this school and this village.”