The Covid-19 stay-at-home way of life has likely sparked many expected responses, given a person’s age, demographic and personality. For many who work in service industries, it’s been a time of financial hardship and stress. For those vulnerable to COVID-19 by age or health condition, it’s been a time of heightened concern. And for some who live alone and enjoy their solitude, it’s been no big shift.

Yet while certain responses could be expected,  others could not. As the most strict shutdown phase has begun loosening for many Ohioans, the News asked a half dozen villagers this question: is there anything you’re learning during this period that is meaningful, or surprising? 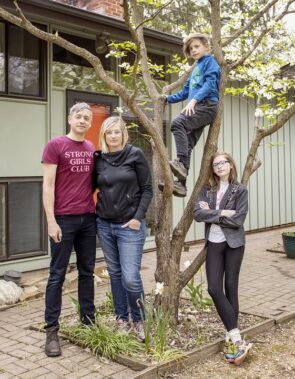 Matthew Collins, Corrie Van Ausdal and their children, Theo (in tree) and Tiger, reflected recently on the changes the stay-at-home order has brought to their family, including both more stress and more serenity. (Submitted Photo By Matthew Collins)

Like other local families with school-age children, Corrie Van Ausdal and Matthew Collins, along with their children, Theo,  9, and Tiger, 13, have lives that hum with separate activities. Usually the family’s calendar is packed with multiple daily events for the kids, and Van Ausdal and her husband, who both own small businesses, also juggle various roles.

That hustle came to a grinding halt  with Gov. Mike DeWine’s March 12 order to close schools, followed by his order to stay at home. Since then, the family has been spending a lot more time together than they usually do.

The most unanticipated outcome has been a new relationship between her children, according to Van Ausdal.

Usually busy with separate activities, her kids began sharing a series of books, “The Ranger’s Apprentice.” Inspired by the books, Theo offered himself as an apprentice to his big sister, who assigns  him tasks to perform. The tasks are playful, such as running down the hill at Gaunt Park or climbing a tree, and Van Ausdal sees Theo and Tiger engaging with each other in a new way.

“They hadn’t done that sibling stuff together before,” Van Ausdal said. “It’s been unexpected and wonderful.”

On a personal level, she’s been surprised to find her “inner recluse,” Van Ausdal said. An extrovert who never turns down a chance to see friends, she expected staying home to feel stifling. And yet she’s found new pleasure in time alone.

“I would not have expected to like that,” she said.

Van Ausdal is clear that the shutdown  also provokes added stress due to financial concerns. Some days, she said, that stress can be consuming.

Yet other days, she finds a surprising serenity in the shutdown, for both herself and her family.

“Some days have a lovely, calm feeling, like Yellow Springs in the ’80s,” she said.

For Karen Gardner, the range of emotions sparked by COVID-19 has been unexpected.

“I’ve been surprised at times by how much anxiety and depression I’ve been feeling,” she said recently. Her own experience last year dealing with a serious illness while in a foreign hospital has sometimes come back to her, as she hears stories of COVID patients isolated from family while getting care.

“It has triggered [the memory of] that experience in the hospital,” she said.

Yet those difficult feelings have been balanced by a new equanimity. She’s learning appreciation for slowing down, something she and her husband, Village Council member Kevin Stokes, rarely have time for.

Forced to be less social and active, she’s discovered surprising rewards. She enjoys the increased time at home with her husband. And while her previously active life left her feeling there’s always too much to do, she’s discovering the value in doing less.

And she’s especially appreciative of her daughter, Jonina, and her family, who live in town. Being with her daughter, son-in-law and granddaughters has brought joy in a stressful time.

“It’s hard to imagine how I’d be doing without them,” she said.

The pandemic and resulting economic shutdown have opened Kineta Sanford’s eyes to a surprising level of financial insecurity in this community.

“The veil has  been lifted on how much need is here in Yellow Springs,” she said last week.

The outreach and fundraising manager at Home, Inc., Sanford was already well aware that many villagers struggle with high housing costs. But distressed posts on social media have brought home to her  how the pandemic is creating financial hardship for many in the village.

“A lot of people are shocked at finding how many are living on the edge of poverty, paycheck to paycheck,” she said. “We see the suffering now. But it’s been here.”

Sanford, 28, feels extremely grateful that both she and her husband still have their jobs, especially since many of her peers, especially those in the service industry, have lost theirs.

Grateful to see Village leadership trying to address the needs of vulnerable villagers, Sanford is also hopeful that this crisis leads to new thinking on how the local economy can be less dependent on tourism in the post-pandemic world.

“We as a town have a unique ability to come together and analyze how to build a more resilient Yellow Springs,” she said.

On a personal level, Sanford said she’s been impressed with the ability of her daughter, a Mills Lawn student, to weather the pandemic. While the isolation has been hard on many children, her daughter, while missing school and friends, has “rolled with the punches.”

“She’s leaning into it,” Sanford said. “I see how her introverted nature has prepared her.”

For retired Antioch College professor Anne Bohlen, the shutdown has led to a newfound appreciation of not only her village, but her home in Park Meadows, her “community within a community.”

Inhabited by many older villagers who live alone, the condo community in this shutdown time has provided a valuable feeling of safety and connection, she said. Residents wave and talk when they meet, keeping a safe distance yet still managing to get together.

“Six feet is not that far apart,” she said.

When one resident recently had a birthday, others gathered outside her home to toast her with glasses of wine and hors d’oeuvres.

“It was delightful,” Bohlen said. “We all did the right thing, but were still connecting.”

Unexpected outcomes have also emerged for Amy Magnus, who’s been at home with her husband, Jeremy, and school-age children Zan and Lian. One surprise has been a more nuanced understanding of her own personality.

A writer who enjoys spending time alone, Magnus expected the stay-at-home time to be right up her alley. And she has deeply appreciated time spent with her husband and children.

But as someone who travels regularly for her job with the Air Force, Magnus is surprised how much she misses that travel, along with the sense of discovery it brings. Zoom meetings, in which she now engages  with co-workers, just don’t cut it.

“I need, physically, a way to walk through many doors,” she said last week. “There’s something magical about walking through doors. It’s what I miss most.”

All in all, she concluded: “I’m one part homebody, and one part vagabond.”

Magnus also credits the shutdown with reminding her of the value of neighbors. She loves being out in her front yard planting as her neighbors, Nate Cornett and Lisa Wolters, also garden in their front yard. Before the shutdown, everyone was busy, out in the world. Now, they’re at home in their own yards, yet connecting.

“This has been healing,” she said.

Magnus also feels validated in her decision to live in Yellow Springs. The guidance and dedication of local leaders have impressed her, along with how villagers are pulling together.

Magnus was living in upstate New York just before the millenium, when “doom and gloom” predictions were rampant regarding all that could go wrong during that time. She realized then that, if things did go wrong, she was not in the place she wanted to be.

“I thought, where would I want to be?” she said. “And then I drove to Yellow Springs.”

Since Olga Harris describes herself as a homebody, the stay-at-home mode feels comfortable. But her husband, Bob, a retired Wright-Patterson AFB engineer, is active in the James A. McKee Association and the African American Geneology Group of the Miami Valley, and finds he misses those groups acutely.

What’s been surprising, however, is that in his new spare time he’s been writing his memoirs, which he intends for his great-grandchildren. He‘s never before tried writing about his own life, and it feels meaningful.

The couple have lived in their Miami Drive home since 1969, when they moved to the village to provide good schools for their first-born, Angela, now a law school professor at University of California Berkeley. Local leaders’ response to the current crisis, especially regarding caring for seniors, has confirmed their belief that the decision to move to town 50 years ago was a good one.

“I carry the Yellow Springs banner in my mind, wherever I go,” Bob said.

This stay-at-home time has also offered Bob time for reflection, including reflection on his marriage. Olga, a retired librarian, is interested in literature and the arts, while he’s a math guy, and he’s been thinking about how these differences, over the six decades of their marriage, have helped him expand.

“My wife is more versatile than I am,” he said. “She’s helped me grow.”

For Donna Denman, the COVID-19 crisis isn’t hard on a personal level, but it’s heightened her social justice concerns. She’s especially disturbed by the proportionally higher death rate among African Americans and other minorities, due partly to underlying medical conditions linked to poverty.

“It’s so frustrating, what’s happening,” she said. “We have to do something about racial and income inequality.”

Ironically, Denman said, the current shutdown, while keeping her physically separate from others, has in some ways strengthened relationships, including her relationship with her daughter, Linnea. Mother and daughter each live alone and during the shutdown, they’ve been eating dinner together each evening.

“It’s been a wonderful time to deepen an already good relationship,” Denman said,

And while she misses her regular meditation and friends at the Dharma Center, she looks forward to seeing them during meditation online. Even though she’s only seeing her friends in a virtual way, the connection feels real, and meaningful.

“Zoom is wonderful,” she said. “It’s so good to see their faces.”