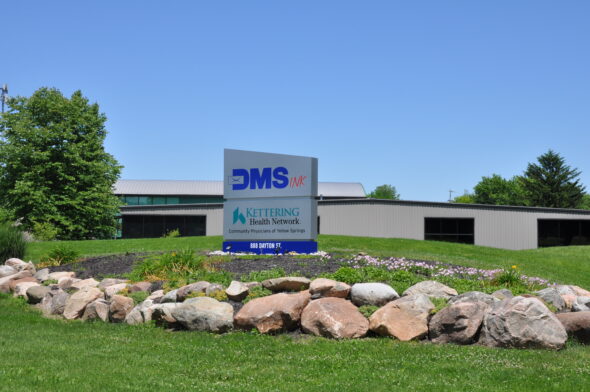 DMS ink, a direct mail and printing services company located at 888 Dayton St., was sold last month to Cincinnati-based firm Graphic Village. The sale was of the business, not the property, which remains owned by former DMS ink President Christine Soward and her husband, Ken. The new business owners plan to keep the Yellow Springs facility open at that location. (Photo by Audrey Hackett)

A company that moved to Yellow Springs four years ago has been sold to a Cincinnati-based firm.

DMS ink, a direct mail and printing services company located at 888 Dayton St., sold last month for an undisclosed amount to Graphic Village, a print marketing firm. The deal was finalized on May 19. The new owner plans to maintain the local facility, which employs about 40 people. No current employees reside in Yellow Springs.

The sale was of the business, not the property. DMS ink President Christine Soward and her husband, Ken, remain the owners of the office complex at 888 Dayton St., which they purchased for $1.57 million in 2016. The building was previously owned and occupied by Creative Memories/Antioch Publishing. It currently houses two medical practices, Community Physicians of Yellow Springs and Yellow Springs Primary Care, and a healthcare software company, Ability Network, formerly eHealth Data Solutions, in addition to DMS ink.

In a phone interview this week, Soward said the sale brings new resources and stability to a company that was on a growth trajectory, but has struggled in recent years due to industry and business changes. An additional business downturn this spring related to COVID-19 was also a factor motivating the sale, according to Soward.

“We did the best thing by employees and the community by selling it,” she said.

Soward will remain in the new company as vice president for business development, working out of the Yellow Springs facility. She took the helm of DMS ink in 2005 and moved the business to Yellow Springs in 2016. Formerly known as Dayton Mailing Services and located in downtown Dayton, the company was a family-owned business founded by her father, Robert Hale, in 1984.

Buyer Graphic Village is a 200-employee company that combines a wide range of printing, marketing, branding and related services under one roof, according to Chairman Eric Kahn, reached by phone this week. Owned by Cincinnati-based private equity firm Revitalize Capital, founded by Kahn, Graphic Village was built over the past six years through a series of acquisitions of printing-related companies. DMS ink is the latest acquisition, and the firm’s second this year.

“We are now the largest independent printer in the region,” Kahn said.

Graphic Village had $22 million in 2018 revenue, according to a recent article in the Cincinnati Business Courier.

Kahn said the company acquired DMS ink, with whom it has worked on printing projects in the past, to benefit from its people and technology. DMS ink handles large-scale printing and mailing projects, including confidential financial, medical and legal documents. Clients include businesses and agencies in health care, insurance, auto, energy, nonprofits and municipal and state governments.

Graphic Village seeks to develop and expand those lines of business, bringing the company back from recent downturns, according to Kahn.

“We hope to grow it back to where it was several years ago,” he said.

While Graphic Village last year consolidated its operations into a newly renovated facility in the Cincinnati suburb of Blue Ash, the company has no plans to move DMS ink from its Yellow Springs location, according to Kahn. Graphic Village will keep operations at the local facility in order to retain the current workforce and make use of facility-specific compliance related to data security and patient privacy, he said.

After relocating to Yellow Springs amid fanfare from Village and county leaders in January of 2016, DMS ink experienced a quiet reversal of fortunes.

Village leadership and the county’s development office wooed the company to town, with the Village and Board of County Commissioners both unanimously approving a tax abatement agreement for a planned expansion of the 97,000-square-foot building at the northwest corner of Dayton Street and East Enon Road. The company at that time intended to double its production, Soward previously told the News.

The tax deal, known as an enterprise zone agreement, only applied to the company’s intended building expansion. It entailed a 75% reduction in the amount of property tax collected, over a 10-year period, from the company’s planned $1.5 million, 50,000-square-foot expansion. The agreement would have saved the company about $30,000 per year, or about $300,000 over the course of 10 years.

But that expansion never happened, and consequently the tax abatement never went into effect.

In 2017, Village Council and the County Commissioners both unanimously passed resolutions amending the tax agreement to allow DMS ink to delay the start of construction by one year. Then in February of 2018, the company asked to withdraw from the agreement, according to Paul Newman, Greene County’s director of development in an email this week.

Soward said this week that a combination of factors led to the company’s change of plans. DMS ink unexpectedly lost a major, longtime customer in 2017. “That put our expansion on hold,” she said. Then, deregulation of industries including health care and financial services under the Trump administration led to a 30% reduction in print mailings in health care alone, with a consequent drop in business and revenue, according to Soward.

All in all, the company saw a 60% decline in income within a couple of years, she said.

Soward also cited difficulties in finding employees as a constraint on the business. Due to the confidential nature of financial, medical and legal documents the company handles, employees must pass background checks and drug tests, which limits the pool of workers, she said.

More recently, DMS ink has seen an additional 40% decline in business related to COVID-19, Soward said. Though the company is considered an essential business, many of its customers were shut down by the state due to the pandemic, she said.

DMS ink previously earned distinctions as part of the Dayton Business Journal’s “The Business of the Year Awards Program,” as well as being recognized in 2017 by the Greene County Community Improvement Corporation for its role in bolstering economic vitality.

When DMS ink moved to Yellow Springs in early 2016, it had a total of 80 employees, including some working at its Dayton facility. That facility has since been vacated, and is now under contract to be sold, according to Soward. The company’s workforce increased to 101 full-time employees as of Dec. 31, 2016. Just over a year later, in January of 2018, the company employed 97 workers, with all but a dozen working in Yellow Springs.

As part of the enterprise zone agreement that never took effect, DMS ink agreed to bring at least 90 full-time workers to Yellow Springs over the first two years of the agreement.

The company’s workforce now stands at just over 40, according to Soward. The decrease is partly the result of two rounds of layoffs, one a couple of years ago following the loss of the major customer and one this spring in response to COVID-19. Employee attrition and automation of work processes also have been factors in the reduced workforce, according to Soward.

Asked if the company had overextended itself in moving to Yellow Springs, Soward said it had not. Rather, a series of unforeseen events forced the company to trim its growth plans, she said.

“Yellow Springs has had no negative impact on our business,” Soward said.

She added that she and her husband continue as owners of the 888 Dayton St. property, which currently has 7,500 square-feet of office space available for lease.

One benefit touted by Village leaders in attracting DMS ink to Yellow Springs was the financial impact of property and income tax revenues. Separate from the tax abatement, the company was to have paid about $20,000 in property tax annually, based on the assessed value of the land and existing building at 888 Dayton St.

But county property tax records show that DMS ink until recently was delinquent in its taxes in the amount of over $75,000, including interest/penalty. The delinquency covered the tax years 2017 and 2018, during which time the company paid no property tax to the county. Beginning last September and continuing through this March, however, DMS ink paid its current and prior years’ taxes. It is no longer delinquent.

Asked about the former delinquency, Soward said DMS ink was facing significant revenue loss at the same time that the county doubled its appraisal of the Dayton Street building value, leading to a doubling of the company’s tax bill. County tax records show that the building was appraised at about $493,000 in 2017, in line with the prior four years, but was revalued at $1.3 million in 2018. The company’s tax bill jumped from about $22,000 annually to about $50,000.

“It was really tough to reset,” Soward said about the company’s finances during that time.

She added that she and her husband marshalled their personal savings to keep the company afloat, and once they were able to refinance the business, they worked with Greene County beginning last fall to pay the taxes and interest/penalty they owed.

“We were not taking advantage of the county,” she said.

Asked about the recent reappraisal, Greene County Auditor David Graham last week said it was tied to the $1.57 million sale of the property in 2016. The building had been appraised at well over $1 million prior to 2013, but a previous owner, Yellow Springs LLC, had successfully challenged that valuation, he said.

Meanwhile, DMS ink is contesting the property’s current valuation, with a hearing on the matter scheduled for June 22. County records show that the company is seeking to return the county’s valuation to its prior level of $493,000.

That effort is being opposed by the Yellow Springs school district, which in a counter-challenge states that the total valuation of building and land should be $1.57 million.

Asked about the counter-challenge, District Treasurer Tammy Emrick wrote in an email this week that the district needs to preserve its tax revenue.

“When a business files a request for a large tax valuation reduction we feel it is in the best interest of the school district to show up and present our side of the story. We can only do that by filing a counter claim,” she wrote.

Emrick pointed out that such a reduction would mean that the tax amount “is lost to the district forever,” and property taxes subsequently would have to go up to offset the loss and maintain school levy amounts.

Regarding the delinquency, she said the effect on the district had been limited.

“The impact of the delinquent taxes on the district so far has been minimal; however, with the current economic situation, receiving delinquent taxes will help us maintain our programs,” she wrote.

Regarding income tax paid by DMS ink to Yellow Springs, the Village of Yellow Springs declined to release information about the total tax amount or payment status, citing Ohio law and the policy of the Regional Income Tax Agency, the contracted service that collects Village taxes. The Village also benefits from employee income tax, currently set at a rate of 1.5% for those who work in Yellow Springs.

Soward said this week that the company’s tax issues are behind them. And she emphasized the advantages of the new ownership, which she said included tax revenues for the local community.

“Graphic Village wants this facility to be successful, and they’re committed to staying in Yellow Springs,” she said.