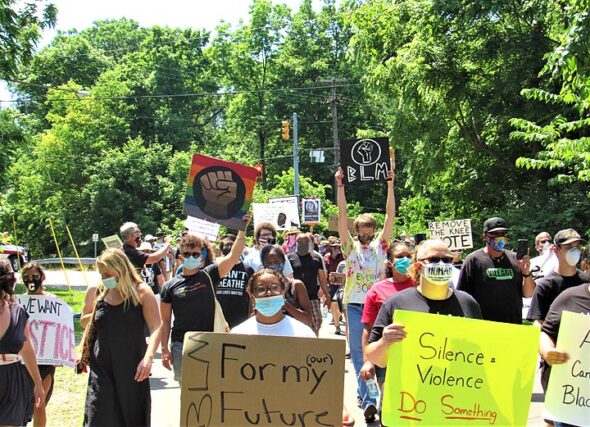 The resolution recognizes that “racist beliefs are a direct threat to our residents and visitors” and contribute to a health disparity for people of color. Pictured, a recent Black Lives Matter march in the village (Photo by Malaya Booth)

At its June 15 regular meeting, Village Council declared racism a public health crisis and committed to taking “meaningful action” to respond to the “death, trauma and injury caused by institutional racism.”

The resolution, approved unanimously at the virtual meeting, states that the Village recognizes that “racist beliefs are a direct threat to our residents and visitors” and contribute to a health disparity for people of color.

“It is the responsibility of local government in collaboration with community members to actively identify this threat, prioritize implementation of anti-racist policies and take other intentional actions to address systemic racism,” the resolution adds.

With the resolution, Council commits to continuing to reform local policing, to improving affordability for residents and to prioritizing racial equity in decision-making, among other steps outlined.

Council member Kevin Stokes, who is Black, hailed the measure, saying that while some don’t believe racism is real, it continues as a vestige of slavery in the U.S. Stokes expressed some optimism that progress could now be made to address racism, as “since it was done intentionally, it can be undone intentionally.”

“All these things that are wrong have been wrong for a very long time, but there seems to be this momentum now to make some substantive changes,” he said.

Council Vice President Marianne MacQueen, a white person, said she is planning to propose “radical change” for local policing, and also wants the Village to think about how it can address racism in the county and state.

“I’m aware that while certainly racism exists in Yellow Springs, I would say it’s a bigger problem outside of Yellow Springs,” she said. “It behooves us to make a decision about whether we want to engage in activities beyond our village.”

Council member Laura Curliss, who is also white, is keen to focus on police reform, using recommendations from the former Justice System Task Force and other “best practices.” Council member Lisa Kreeger wants to take a closer look at police policies and budgets, as well as committing to personal work to dismantle racism.

“I think institutional racism in the village hides in places that perhaps I, as a white person, wouldn’t even notice or in microaggressions I wouldn’t even recognize,” she said. “I’m working very hard to be more aware. That’s a journey that will never end.”

The resolution itself recognizes that racism has “multiple dimensions,” including, “individual racism that is internalized or interpersonal as well as systemic racism that is institutional or structural.”

Village Manager Josué Salmerón, who is Latino, said he was encouraged by the discussion, noting that he has personally experienced discrimination, while also acknowledging his privilege, and that he wants to make more progress in local policing.

“We have done some of the work, and there is so much more to do,” he said.

YS Police Chief Brian Carlson, who is white, said he looks forward to more dialogue on race issues locally, and said he believes “we can make a significant change in our small community” when it comes to policing reform.

Finally, Village Council President Brian Housh, who is white, said the resolution is not merely “platitudes” or based upon the “trendy thing to do.”

The resolution can be read in full at ysnews.com.

• Salmerón recently celebrated his one year anniversary as Village manager, it was announced at the meeting.

• Council passed the second and final reading of an ordinance asserting the right of village renters to “pay to stay.” The measure requires local landlords to accept late payments so that a tenant can stay in their residence and would be enforced by Xenia Municipal Court. In addition, there are now relief funds available for local renters having difficulty making payments, YSPD Outreach Specialist Florence Randolph announced at a later town hall meeting. For those seeking relief, Randolph can be reached at 937-767-3716.

• Council unanimously passed an ordinance canceling utility debts accrued before 2015. That amount totals around $430,000. By Ohio law, the Village cannot collect on debt older than six years, Salmerón explained. The Village is considering options to collect on accounts that are less than 120 days behind in payments, including a collection agency. In a related effort, Salmerón will soon present a recommendation on overdue utility payment plans for local tenants, which currently require the approval of local landlords.

• Council held an in-person executive session at the Bryan Center on Saturday, June 13, to interview candidates for the Village solicitor position, it was reported. No new hire has been made.