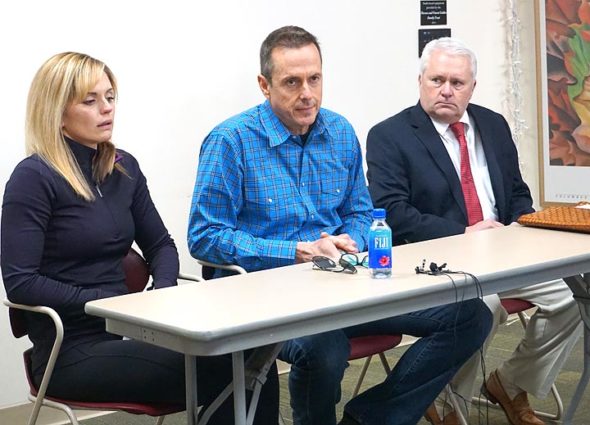 Molly and Linsdey Duncan, who were involved in a double fatal shooting outside their home on Grinnell Road on Wednesday, Feb. 12, gave statements to reporters Friday afternoon at the Yellow Springs Library meeting room. They were accompanied by Springfield-based attorney Gregory Lind, right. (Photo by Megan Bachman)

No charges in Grinnell shooting

No charges will be filed in the double fatal shooting that occurred Feb. 12 outside a home on Grinnell Road, just south of Yellow Springs, the Greene County prosecutor has announced.

The Sanderses, who most recently lived in North Carolina, died in what authorities in February called “a shootout” with Duncan, after he and his wife, Molly, pulled into their driveway at about 11 a.m., having returned home from breakfast in town.

Molly Duncan, who was driving the Duncans’ car that morning, called 911 while the shooting occurred. The couple told investigators that when they stopped outside their closed driveway gate, a masked man approached their vehicle with a gun and threatened them. According to the Duncans’ account, Lindsey Duncan, who was in the passenger’s seat, subsequently got out of the car with a weapon — for which authorities confirm he has a conceal carry permit. The two men exchanged words and then gun fire. The Duncans reported that Lindsey’s ex-wife then pulled up in a car, got out and also threatened them with a gun before being shot by Duncan.

The Greene County coroner said in February that the apparent cause of death for Cheryl and Reed Sanders was multiple gunshot wounds. Investigators reported finding three weapons at the scene and multiple shell casings.

A nearly four-month investigation — slowed considerably by the COVID-19 pandemic — ended last week with the presentation of the case to the grand jury.

A press release from Greene County Prosecutor Stephen K. Haller said that the jurors’ determination of self-defense was based on evidence indicating that the Sanderses had planned the confrontation, which the prosecutor called an “assault.”

“Both assailants were armed and determined to do harm to Mr. and Mrs. Duncan,” according to Haller.

Greene County Sheriff Gene Fischer told reporters in February that advance planning was suggested by the fact that the Sanderses were driving a car with counterfeit temporary Ohio plates and Reed Sanders was carrying multiple forms of identification. Sheriff’s deputies also found two small cameras mounted on a post across from the Grinnell Road home with a live stream of the property going to a cell phone found in the Sanderses’ car.

According to the prosecutor’s office, the Sanderses “drove to Ohio [from their home in North Carolina] with the intent to kill Robert Lindsey and Molly Duncan.”

“Greed and hatred” are believed to have been the motivation for their actions, according to the press release from Haller. Given the grand jury’s findings, “my office considers this case closed,” Haller wrote to conclude his release.

Investigators in the case included the Greene County Sheriff’s Office, the state’s Bureau of Criminal Investigation, Cedarville Police Department, the prosecutor’s office and authorities in North Carolina and Texas, where the Sanderses and Duncans had previous ties.

Lindsey Duncan is the former head of Genesis Today, a multi-level marketing health and wellness company founded in Texas.

Ex-wife Cheryl Sanders, who once worked with Duncan in Genesis Today, and continued in partnership with Reed Sanders in promoting various health and fitness products, was also a movie stunt woman who appeared in more than 70 films. The shooting generated national media attention as well as shock among the Sanderses’ friends and colleagues.

For follow-up coverage on the Grinnel shooting story, and to read about the the Greene County Grand Jury’s recent conclusion concerning the matter, go here.

5 Responses to “No charges in Grinnell shooting”