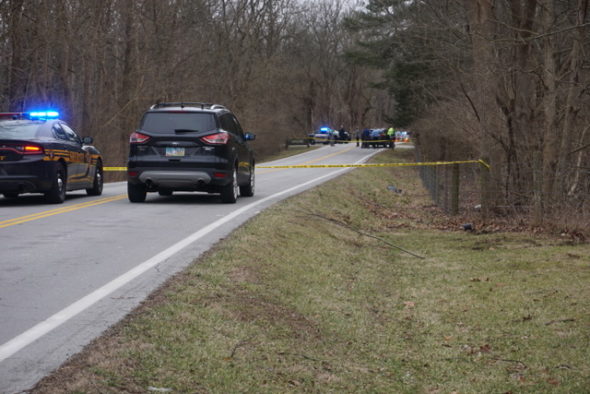 The Greene County Grand Jury’s recent conclusion concerning the double fatal shooting Feb 12 outside a home on Grinnell Road — which the county sheriff described at the time as a “shootout” — confirmed the initial impression of law enforcement at the scene that gray winter morning: self-defense.

Evidence previously not released publicly was among materials that led investigators to believe the deceased, Cheryl Sanders, 59, and her husband, Robert “Reed” Sanders, 56, had driven to Ohio from their home in North Carolina with the intention of killing Cheryl Sanders’ ex-husband, Robert “Lindsey” Duncan, and Duncan’s wife, Molly, at the Duncans’ Grinnell Road home.

The prosecutor’s case file, provided by his office through a public records request, includes a hand-written note — which Haller said investigators confirmed as belonging to the Sanderses — found in the couple’s vehicle and detailing their intentions.

A piece of lined notebook paper bears the handwritten heading, in all uppercase letters, “Be prepared prior to leaving for Y.S.”

Under that, also in all uppercase letters is written:

A couple lines down, in a mix of upper and lower case letters, is written:

—A: Have alibi
—B: Cheryl is out of danger / ability to drive back to Asheville

A numbered, nine-point to-do list follows and includes such details as “Have camera operational,” “Call AA prior to departure to verify Lindsey location,” “Purchase airplane fuel,” “Testosterone injection,” Purchase car/truck prior to leaving for Y.S.,” “Phones are charged from Verizon.”

Multiple 911 calls, including a distressed call from Molly Duncan, reported the shooting shortly after 11 a.m. Feb. 12. The other calls came from neighbors who heard the shots or drivers on the road who passed the scene while it unfolded and afterward.

Cedarville Police units were first to arrive, followed by Miami Township Fire-Rescue medics and Greene County Sheriff’s deputies. Cheryl Sanders was lying in the Duncans’ driveway, and Reed Sanders was on the ground across the road, by the entrance to the former Camp Greene. Medics were unable to resuscitate the pair, and the coroner was called.

While the exact details of what transpired outside the Duncans’ home changed slightly with the documentation of different retellings, the following scenario has emerged based on the Duncans’ statements, evidence from the scene and investigators’ findings.

The pair pulled into their gated driveway at 3443 Grinnell Road shortly after 11 a.m., having gone for coffee and breakfast in downtown Yellow Springs. Investigators later confirmed the couple’s activities with the relevant downtown proprietors. Molly Duncan was driving and Lindsey was in the passenger’s seat. Lindsey said he got out of the vehicle to check for mail in their mailbox, and it is unclear whether he was back inside the vehicle, getting back in, or still outside, when a man wearing a camouflage mask approached Molly’s side of the car with a gun.

According to the transcript of his Feb. 12 interview with sheriff’s deputies, Lindsey said he owns a gun, but had left it in the house earlier, and so he asked Molly if her gun was in the car. Both Duncans have Ohio conceal carry permits, which they told investigators they had obtained out of fear that Cheryl Sanders wanted to do them harm. They obtained the permits when they moved about four years ago to the area, where Molly has family nearby.

With Molly’s gun in hand, Lindsey said he exchanged fire with the man later identified as Reed Sanders. Lindsey said his ex-wife then pulled up in a vehicle, got out and also threatened them with a gun before being shot by Duncan.

The Greene County coroner said in February that the apparent cause of death for the Sanderses was multiple gunshot wounds. Investigators reported finding three weapons at the scene and multiple shell casings. The Duncans were not physically hurt in the altercation.

The nearly four-month investigation — slowed considerably by the COVID-19 pandemic — ended with the presentation of the case to the grand jury on June 17.

Just a day after the shooting, however, Greene County Sheriff Gene Fischer had already told reporters that advance planning was suggested by the fact that the Sanderses were driving a car with counterfeit temporary Ohio plates, and Reed Sanders was carrying multiple forms of identification. Sheriff’s deputies also found two small cameras mounted on a post across from the Grinnell Road house with a live stream of the property going to a cell phone found in the Sanderses’ car.

In the course of the inquiry, investigators traveled to North Carolina, where the couple most recently lived, and to Texas, where both couples had longterm ties.

Lindsey Duncan is originally from Austin, and it was there that he began a career marketing health and nutritional supplements. The former head of Genesis Pure and then Genesis Today, he promoted his company’s products on such national television programs as “Dr. Oz” and “The View.” He left the company after settling a 2015 suit with the Federal Trade Commission in which he agreed to pay $9 million after being accused of “deceptively” touting “the supposed weight-loss benefits of green coffee bean extract.”

His ex-wife was at one time affiliated with the company as well, and she later continued in partnership with Reed Sanders in promoting various health and fitness products. She also was a former movie stunt woman with credits in more than 70 films.

Documented acrimony between Cheryl Sanders and Lindsey Duncan includes a suit filed by Duncan in 2016 seeking between $200,000 and $1 million from Cheryl and Reed Sanders and accusing Cheryl of breach of contract.

Investigators also confirmed Lindsey Duncan’s claim that his ex-wife made inquiries about hiring a hit man to kill him about five years ago.

Also in contention, according to Greene County Prosecutor Haller, were $400,000 trust funds for each of the former spouses’ two college-age daughters. Lindsey Duncan has sole legal control of the funds, Haller said.

“If he was gone, then Cheryl would be able to control those trusts,” the prosecutor said.

There was also at one time a life insurance policy from the period they worked together in Genesis Today that named Cheryl as a beneficiary. The prosecutor said investigators found that it was no longer in effect, but Lindsey, and possibly Cheryl, had thought it was still binding.

All these reasons led Prosecutor Haller to conclude that Cheryl and Reed Sanders were motivated by “greed and hatred” in seeking to kill the Duncans.

Going to the Grand Jury

Although investigators found evidence to support justifiable homicide, Haller said he chose to take the case to the grand jury in large part because of the gravity of the situation.

“Two people were killed,” he said. “We take that very seriously. It deserved a review by the grand jury.”

In a statement to the  press two days after the shooting, Lindsey Duncan said he’d acted “on pure instinct.”

While the prosecutor’s office had a pretty solid sense that Lindsey Duncan had acted in self-defense, Haller said he was aware of some sentiments in the public suggesting that the Duncans’ stories didn’t add up, that the shooting was a set-up of some kind.

Letting the grand jury make the decision about culpability helps “put this to rest once and for all,” he added.

“As I see it, this is a traditional, classic self-defense case.”

Ohio’s self-defense legislation, passed in 2008, gives individuals the right to lethal action in self defense when confronted at their home or in their car. The same legislation also shifted the burden of proof from a defendant to the prosecution, Haller noted.

“I have to prove beyond a reasonable doubt that it’s not self-defense,” he said.

As far as the prosecutor is concerned, “this case is closed.”