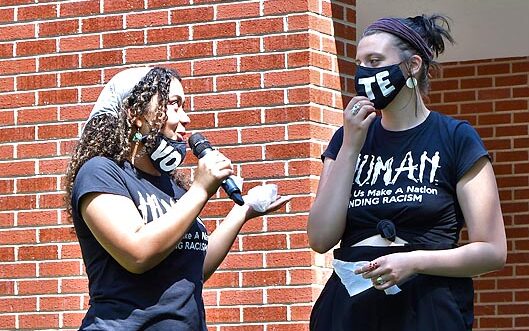 The organizers, many of them local youth, said the Council has not taken significant action since it declared racism a public health crisis at its June 15 meeting.

Nya Brevik, who has organized several weeks of protests, said while organizers have been supported by the community as a whole, she wanted to see “more support from Village Council.”

“Racism was recently deemed a public health crisis in Yellow Springs but up until this point I have seen little to no action taken to make that statement anything but performative,” she said.

“If racism is truly a crisis to the village, I want to see it treated like one,” Brevik added.

Several speakers were also critical of Village requests that organizers obtain a permit to march through downtown streets, as well as a call by YS Police Chief Brian Carlson to a purported KKK member who had threatened to counterprotest at a planned Black Lives Matter-themed Fourth of July parade.

The discussion came during a Council item of old business titled, “meaningful action related to anti-racism,” which Council President Brian Housh said was the Council’s next step after declaring racism a public health emergency last month.

“We have been, and are, prioritizing a commitment to meaningful action to address this,” Housh said at the outset of the agenda item.

Council members started the discussion by sharing a series of proposed reforms for YSPD, including disarming police, banning certain lethal force practices, decriminalizing the possession of marijuana, creating a citizen review board to handle complaints against officers, hiring more social workers and others.

“Because of historical forces, the overarching concept of policing, or at least some of that, has been antithetical to public safety and public health,” Council Vice President Marianne MacQueen said during her comments and other speakers.

Organizers then spoke up with specific concerns around recent protests and also demanded that Council take action to address racism more quickly.

In her comments, Julia Hoff appealed to villagers to show up at weekly protests, whose attendance has dwindled in recent weeks, rather than to engage in “white performative activism and allyship.” Basim Blunt suggested the Village prioritize hiring people of color and choosing minority-owned companies when using outside contractors for municipal projects.

Other speakers brought to light several recent controversies related to the weekly downtown protests, which have taken place over the last eight weekends.

Organizer Julian Roberts said demonstrators have been as “compliant as possible while trying to spread an important message.” She defended the importance of the weekly marches along U.S. 68, which have become a source of contention between organizers and Village officials.

“Our goal is to keep people educated on what it’s like to be Black in America while also spreading awareness by marching down the state route to maximize the number of people who see our message,” Roberts said.

The Village has continued to request that organizers obtain a permit for their marches, which requires that they have the backing of an organization with liability insurance. Organizers have been marching without a permit, or insurance, for the last four weekends. The Village has also asked organizers to submit a march route prior to the events.

Village Manager Josué Salmerón said in a later interview that Village efforts to secure permits and permissions are “for their own safety,” referring to organizers, who could be personally held liable if an incident were to occur during a protest.

“We are protecting protesters by making sure they have the permits,” Salmerón explained. “There are major liabilities there.”

After the first impromptu anti-racism march following the June 6 rally, the Village’s Human Relations Commission stepped in to give the informal group permission to use its liability insurance for marches on June 13 and 20. But it revoked insurance on the weekends of June 27 and July 4 because of the alleged KKK threat and other concerns that counterprotesters might show up. Since then, organizers have not sought a permit or insurance for their weekly marches.

The Village is additionally requesting march routes ahead of time, also for safety reasons, in order to stage Village vehicles to block traffic and protect those in the roadway, Salmerón said.

Roberts went on to criticize a recent phone call between Chief Carlson and a man claiming to be a KKK member, which she said was “extremely concerning” and “an absolute dismissal of the declaration of racism as a public health crisis.”

The call in question was placed by Chief Carlson on June 16 to a man who said his name was Chad Rickenberg and was the “imperial wizard,” or leader, of the “Old Glory Knights of the Ku Klux Klan,” a branch of the hate group based in southeastern Ohio. He had left a voicemail at the Village that was heard earlier in the day stating his group’s intention to protest the Black Lives Matter-themed July Fourth parade. In the call, he uses a racial slur to refer to African Americans.

Reached for comment by the News a few weeks later, the Bellefontaine man said in his call to the Village he used a fake name and lied about his KKK affiliation so that the parade would be canceled. Additional News reporting tied him to KKK groups in Indiana in the past.

During his call with the man, Carlson told him that the parade was canceled for public safety reasons after “some controversy over the day.” The man responded by telling him they would stay away. The man went on to say that his group supports law enforcement “110%,” saying “you guys do a great job” and noted that he personally witnessed local officers “getting hassled by people as they were driving by doing their jobs.”

Carlson responded, “I appreciate that support, sir. It’s a tough time right now.” He later thanked the man again and told the man to “stay safe and healthy.”

Although it’s unclear in the call, when the News asked for clarification on this comment about local police officers being “hassled,” the man said he was referring to chants from protesters during a recent Black Lives Matter demonstration.

Jen Boyer, another organizer, said she was “deeply disturbed by the YSPD and Village response” to the KKK protest threat and lamented that the group’s insurance had been pulled after the KKK threat.

“Yellow Springs had the opportunity to push back, to stand up, speak out against the counterprotest,” Boyer said. “Instead, we canceled,” she added. “We gave the caller exactly what he wanted. This is not the Yellow Springs I know and love. We can certainly do better.”

In responding to the concerns, Housh noted that the parade was organized by a separate organization that made the decision to cancel. MacQueen stated that the KKK threat did not play a role in the parade’s cancellation, although previous interviews by the News with other organizers indicated the threat was a factor. And Salmerón later confirmed that the Human Relations Commission, not the Village or Council, had initially pulled the insurance.

“I can say the ultimate goal was safety for our community and de-escalation,” Housh said of Village efforts related to the counterprotest threat.

Salmerón said at the meeting that he was dismayed that people view the phone call as conciliatory or appeasing when Village leaders were genuinely concerned about the possibility of counterprotesters causing harm to local demonstrators.

“There were threats, and we were concerned about the safety of our residents,” he said.

In a later interview, Salmerón further explained the Village’s approach in the phone call. He said the Village’s end goal was to “keep these racist people out of our community” and to avoid the safety risks, and the possible expenses, of a KKK protest here.

“They are an unwelcome burden on our community,” Salmerón said.

As a result, Village leaders decided that the official who returned the call, whoever it was, should “bite their tongue” and focus on making sure the group does not come to protest, Salmerón said. He added that challenging them would not have helped them change their views, but could have resulted in increased hostility toward the village.

“The end goal was to get him not to come,” Salmerón said. “To change hearts and minds requires a lot of engagement, a lot of trust-building, a lot of learning. You’re not going to do that on a phone call.”

At the end of the discussion, Housh said that a restorative justice circle will be organized between the Village and demonstrators to work out these issues, while Council will take legislative action in upcoming meetings to address racism.

Other items from Council’s July 20 agenda will be in an upcoming issue of the News.