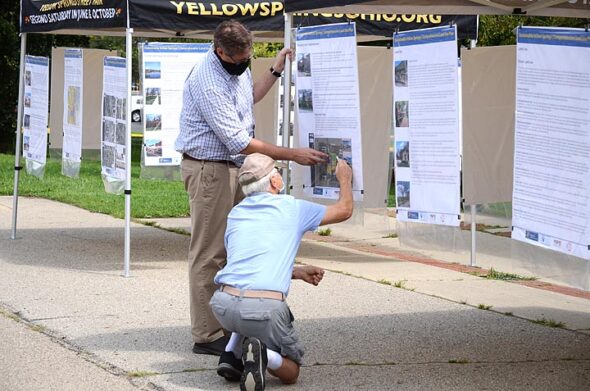 A draft of the Village Comprehensive Land Use plan is now available for comment at www.sustainableyellowsprings.com. On Tuesday, consultant Aaron Sorrell, left, hosted an eight-hour open house in the open air at the YS Train Station for villagers to give feedback. Here he spoke with Rick Donahoe. (Photo by Megan Bachman)

The future of Yellow Springs, now

The future of Yellow Springs is now being planned.

A few proposals: Light industrial facilities on the western edge of town. Offices and a new residential neighborhood along Xenia Avenue at the southern end. A “designated outdoor refreshment area” downtown where alcoholic beverages can be consumed on the sidewalks. And a dog park.

But before the ink is dry on the latest Comprehensive Land Use Plan, which sets the course for 10 to 20 years of local development, villagers can give their feedback.

Comments are being accepted on the draft plan at http://www.sustainableyellowsprings.com for the next two weeks. A summary of the plan is also printed on pages 6–7 of this issue courtesy of the Village of Yellow Springs.

The draft relies on previous Village documents, including a 2018 housing report and transportation plan and a 2010 visioning plan completed jointly with Miami Township, and also incorporates comments from villagers from two large public forums and more than a dozen smaller feedback sessions since last fall.

Summarizing what he learned about the village, Sorrell said Yellow Springers want the community to stay small, but also desire some economic and housing growth.

“The idea of remaining small and sustainable carried through almost all of the community engagement efforts,” Sorrell said.

“But there is a recognition that the village does need to grow, somewhat,” he added, “in a stable and centered way — not just unfettered growth and growth for growth’s sake. It’s deliberate.”

As a result, Sorrell said he is recommending two “transitional areas” of commercial, residential and industrial development just outside Village boundaries to the west and south. But development is not planned outside of the Village’s urban service boundary, which delineates areas that can be served by gravity sewers. That boundary was set in 2006. And, importantly, development should not “take away from downtown,” Sorrell added.

“A big suggestion that I have is … to make sure that we’re not inadvertently compromising the character and critical mass downtown by diluting that,” Sorrell said. “Downtown is your economic engine.”

To strengthen downtown, Sorrell suggested the Village establish a DORA, or designated outdoor refreshment area, where alcoholic beverages are permitted in a limited area. Under such a plan, tables could be set up in downtown parking lots and parks to help businesses hurt by fewer indoor diners during the coronavirus pandemic.

“Loveland, Ohio, just did it, and they have a similar downtown,” Sorrell said. “I think it makes sense.”

Once approved, the Comprehensive Land Use Plan will be used to “guide public and private development” in the Village, Sorrell explained. The document, which is intended to last for 10 to 20 years, provides the “policy framework” for the Village as it implements its zoning code and subdivision regulations, builds public facilities and parks and undertakes housing and economic development activities, he added.

After the final round of public input, the draft plan will next head to Planning Commission for approval and then to Council. It cost $30,000 and took several months longer than expected as the pandemic halted plans for a final public event, according to Sorrell. Instead, for eight hours on Tuesday, the Village set up tents in front of the train station with plan sections to elicit feedback.

Asked this week if the coronavirus pandemic impacted the plan’s content, Sorrell said he thinks the ideas are “still relevant.”

“It has maybe brought to forefront some issues with the hospitality industry, which was the hardest hit,” he said. “The question is, how do we design our outdoor spaces to better accommodate people, because this is not going to be the last pandemic.”

Village Manager Josué Salmerón said the transportation projects will “significantly enhance the way our residents and visitors move through the village, it will enhance safety and it’s going to provide so much value to our community.” Construction is set to begin in 2023.

• Council added $70,000 for “rental property” as part of a supplemental budget appropriation. Salmerón said the Village is looking to buy property for the purposes of “protecting our infrastructure and protecting our parking assets.” No property was mentioned and Salmerón said the Village wanted to keep the location discreet until it was a “done deal.”

• Council unanimously passed a resolution supporting actions toward the village becoming a National Wildlife Habitat Community. The Environmental Commission, along with Tecumseh Land Trust, Community Solutions and the Glen Helen Association, are working to encourage residents to adhere to natural landscaping practices set out by the National Wildlife Federation to improve wildlife habitat.

• Salmerón announced that the Village received $130,000 in COVID-19 relief funds from the federal CARES Act, which was administered by the county. The Village is still determining how the funds will be accounted for, but relief activities have included 30 hand sanitizer stations around town and signage.

• Council agreed to help fund new “wayfinding” signage in the downtown area with a commitment of $11,000 to the $22,000 project organized by the Yellow Springs Chamber of Commerce and a group of downtown merchants. At least eight signs, including directories that list specific businesses, along with “Google map development” and “Yellow Springs app development” were part of a project budget submitted to Council. Council has not determined from where the funds will come.

• Council Member Lisa Kreeger spoke about her proposal to rename Short Street “Freedom Way” in honor of the contribution of local African Americans to the village. She said the Short Street area might feature a sculpture and educational information and be a stop on a “walking tour” that includes the bronze sculpture of Wheeling Gaunt planned for Hilda M. Rahn park.

• Council voted 4–1 to not allow the Village manager to send to Planning Commission an application from a food truck vendor who had applied to set up in the municipal parking lot along Railroad Street. Council members said they were worried about the competition from mobile food vendors negatively impacting downtown restaurants, many of which have been struggling financially since the beginning of the pandemic. Council Vice President MacQueen cast the dissenting vote.

• Council briefly discussed a new structure for Village boards and commissions proposed by Council member Laura Curliss. The proposal is for Council to organize its work around committees that correspond with municipal departments, such as finance and personnel, peace and justice, environment and energy, and legislative and government affairs. The proposal is to also involve citizen members. Former Village Manager Patti Bates, who was on a subcommittee to look at the model, said she worried that it might hinder the Village manager’s flexibility and argued that citizens should be able to vote on the committees.

• Council unanimously passed a resolution authorizing the Village solicitor to file a proof of claim in the Perdue Pharma bankruptcy case seeking damages for increased municipal expenses during the opioid epidemic. The Village is seeking $2.1 million for past and present  damages, citing increased calls to the YS Police Department for drug-related activity and increased expenditures for law enforcement and other services that can be attributed to opiate addiction and overdoses.

Council will hold its next regular meeting on Monday, August 17.