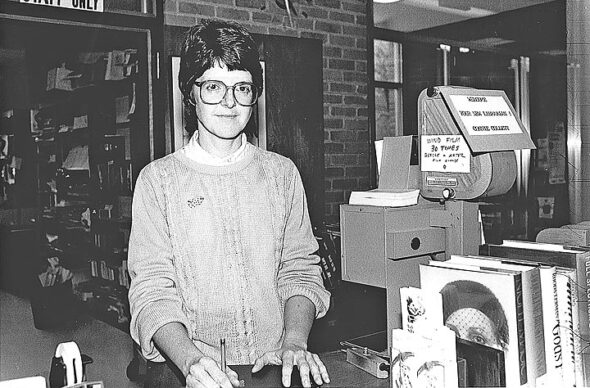 Connie Collett at the library in May of 1989; this photo was taken by News staff after Collett was hired as head librarian. (YS News Archive Photo)

Connie Collett to retire— A chapter comes to a close

Connie Collett, head librarian at the Yellow Springs branch of the Greene County Public Library, thinks of the library as something of her own, personal living room.

“I sit there and receive visitors all day long,” she said.

Soon, however, Collett will leave the living room and adjourn to private quarters; after more than 30 years, Collett is retiring from the position.

Collett told the News via Zoom last week that it felt like the right time to depart from the local branch of the Greene County Public Library, or GCPL, where she’s been head librarian since 1989.

“I’m old and I’m vulnerable,” she said, referencing the ongoing coronavirus pandemic, “so I will be staying home and gardening and doing 30 years’ worth of deferred household maintenance tasks.”

Though Collett is leaving a career in which she dedicated herself to the promotion of lifelong reading, she said that, growing up, her environment wasn’t “book rich.” She spent her formative years in New Burlington, Ohio — the former Clinton County village where Caesar Creek Lake now stands — and said her main access to the library during that time was through the travelling Bookmobile.

“You were only allowed four books every two weeks — I remember rationing out my reading to make it stretch for those two weeks,” Collett said.

Collett didn’t originally plan to pursue a career as a librarian. In fact, she was something of a polymath when it came to her undergraduate studies at Wilmington College; by her third year, she’d taken a variety of classes with no unifying focus. She realized she had nearly enough credits for a bachelor’s degree in sociology, though, so she declared her major in that discipline.

After graduating from Wilmington, a Quaker school, Collett spent a few years with other young Quakers working in apple orchards and living communally. Next, she said she “stumbled into” working in a library in Webster Groves, Mo., a suburb of St. Louis. Working in a library proved to be the right fit for her polymath sensibility — “I think knowing a little about a lot of things is a good background for a librarian,” she said.

After spending a number of years away from Ohio, Collett returned to her home state in 1982, and chose Yellow Springs as the next place she would put down roots.

“I wanted to come home — but not entirely — and Yellow Springs seemed like a great compromise,” she said. “I always say I  came here because of the trees and because I saw women wearing sensible shoes.”

Collett began working with the GCPL system at the main branch in Xenia, where she was hired as the AV (audio/visual) coordinator. At the time, that meant overseeing and maintaining the library’s collection of LP records and 16 mm films, among other things. While she was working in Xenia, Collett was also working toward a master’s degree in library science in Columbus. The library reimbursed her for the money she spent on tuition — a program that remains today for employees seeking further library education that would benefit their work for GCPL.

Collett later worked as a reference librarian in Xenia, a job that she said included typing up the cards for new materials to index them as part of the library’s card catalog system. The library moved its catalog over to a computer database in 1989 — which was also the year Collett moved from the Xenia branch to Yellow Springs, becoming head librarian. She took over the position from Charity Dell, who had been head librarian since 1986, preceded by Marianne Newman, Julia Lewin and Fran Rickenbach.

Collett said she hadn’t planned for her position at the local library to be her last — over the years, she had notions of moving on to other jobs in other places, but when it came time to make the decision, she kept choosing Yellow Springs. 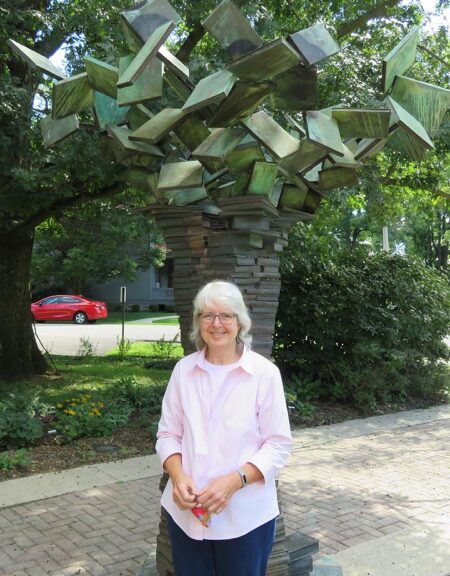 Connie Collett stands outside the library where she’s worked as head librarian for 31 years; her last day will be Sept. 30. (Submitted Photo)

This propensity for change is typical for libraries, Collett said, citing again the GCPL system’s relatively early adoption of a computer database. Libraries, she said, have to stay up-to-date on not only what patrons tend to consume — books, music, movies — but in what formats they consume them — lately, ebooks, digital downloads and streaming. Over the last several years of Collett’s tenure, the library has expanded its offerings beyond media to include telescopes for check-out and a makerspace where patrons can use sewing machines, 3D printers and more.

The most recent change, of course, has been the library’s work to remain open amid the ongoing coronavirus pandemic. Curbside pickup and home delivery have kept the library’s physical collection accessible to all, and the library’s online presence has kept some of its programming — like the annual summer reading program for youth — up and running without a hitch.

The changing world does pose something of a threat to libraries around the world, Collett said, especially post-COVID, when she predicts funding may decrease for public libraries. Her 30-plus years of experience have also led her to observe that people now often eschew librarian expertise when it comes to getting started on research, instead relying on search engines. Google has the advantage of access to millions and millions of sources of information — but it can often be hard for laypeople to ascertain which of those sources are reliable. To Collett’s thinking, this makes libraries more essential than ever, as librarians are trained to sift through the wheat of information to remove the chaff.

“Librarians love ferreting out information and getting people on the path they want to be on,” she said, emphasizing that library patrons shouldn’t be afraid to ask a librarian for help.

“We love when people ask us questions!” she said.

Yellow Springs is full of people who do ask questions, Collett said — and make (reasonable) demands as well. During her time behind the desk, she has observed that village readers are typically uninterested in browsing — they know just what they want, and expect to receive it from their local library.

“I think it’s great that we’re held to such a high standard — and the search is always fun,” she said.

Collett thinks this penchant for demanding excellence speaks to the community’s long involvement in the well-being of its own library. The YS Library Association, which established the library in the early 20th century, has continued to support it over the years. Collett said the nonprofit organization’s influence can be felt every time a patron enters the library building, which was built in 1965 with a lot of help from the YSLA.

“Sometimes I can’t believe that a building that was built more than 50 years ago still serves our community so well — they really put a lot of forethought into it,” she said. “Well, except it needs more electrical outlets!”

Now that her tenure in the 55-year-old building is coming to a close, Collett said she’s looking forward to some time to herself. She plans to get involved in community volunteer work, though she’ll have to wait until the threat of the pandemic has passed. She also intends to play more pickleball with friends when she’s able. And, of course, she’ll devote more time to reading.

“I probably read more fiction than nonfiction — I think that might change when I retire and have more time to read and it’s not always the end of the day and I’m falling asleep,” she said.

She’ll miss the library being not only her own living room, but also her own bookshelves — especially since her long proximity to a large collection of reading materials means she doesn’t own many books of her own. Naturally, this means she intends to return often to the library, this time as a patron.

“I might even visit other libraries!” she said, laughing.

But mostly, Collett said she’d miss the people she’s gotten to know over the years.

“People love their library here, and I’m going to miss being in the center of that,” she said.

Though the GCPL system hasn’t yet selected a replacement for Collett — the application and interview process is taking place now — she said she doesn’t worry about who will fill her shoes once she’s gone; she considers her fellow staff to be almost family and thinks the library is in good hands going forward.

“I have no qualms about my fellow staff’s capability in keeping things moving or in GCPL hiring a good branch head,” she said.

Collett’s last day is Sept. 30; due to the pandemic, there will be no retirement party, but Collett encourages folks to come into the library over the next month — masked and physically distanced, of course — to bid her farewell.

“But it’s not really ‘goodbye,’” she said. “I’ll still be there to check out books!”