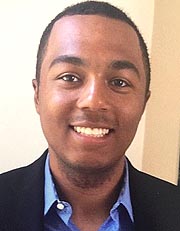 Cameron Dickens, who is filling the position vacated by Rebecca Eastman’s move out of town, earned his bachelor’s and master’s degrees in exercise science with a graduate school focus on research in cardiovascular physiology. His first job after earning his master’s two years ago from the University of Dayton was doing clinical drug research for a company in Cincinnati.

Dickens, a Dayton native who married his high school sweetheart just a few weeks ago, says he’s excited about the teaching opportunity. He is one of two new teachers who will be entering the district this school year. The second, filling a fourth grade teaching slot, had yet to be announced as of mid-August.

In a recent phone interview, he said he decided to change paths from science researcher to teacher out of a desire to spend his days working in a field that has an observable relationship with others.

In the lab, “I wasn’t getting that feedback that I was making an impact on people’s lives,” he said. He may have known it intellectually, but he didn’t see it or feel it.

“There’s no field where you get more immediate feedback than teaching,” he said. “That was exactly the fit I was looking for.”

He got his teacher’s certification through a program at Ohio State University designed for professionals who have degrees outside education. Last year, he worked as a substitute in Centerville, Tipp City and Huber Heights as well as a couple of private schools. His resume also includes several youth coaching positions, particularly in baseball. This will be his first full-time teaching assignment.

Dickens said he was drawn to the middle school grades because it’s “a time in the kids’ lives where they’re naturally curious,” he said. “They’re just beginning to discover who they are, and science plays into that natural curiosity.”

Middle school science, he said, is when students are beginning to “understand how to ask the questions, and learn the skills and problem-solving abilities to answer those questions — how to do good science in general.”

The lessons learned in that inquiry will serve them their whole lives, Dickens believes. “That’s going to translate into young adults who are able to think critically, solve problems and navigate the world in front of them.”

Beginning the school year with all instruction taking place online brings a variety of challenges, not least of which is getting to know students as a new teacher, Dickens observed.

“To me, the biggest thing you can do is to build genuine relationships with students,” he said. “I’m trying to be creative, to think of ways to meet and engage my students.”

He said he’s thankful for his new colleagues in the district and that whenever he’s “feeling stressed,” he remembers that he’s not alone.

He looks forward to the day that the school buildings can reopen, and he’s especially interested in being part of the now-annual Into the Wild biking-camping program for seventh graders, whenever it can take place again.

But while starting the year online isn’t his ideal, Dickens said there are some creative technology opportunities in science that offer “some cool possibilities for this time.” He’s looking forward to exploring those with his students.

And he’s ready to get started.

“I’m really excited to be in the district and be around such a tight-knit community that supports each other,” he said.