An aerial view of the 51.38 acres of land that Oberer, of Miamisburg, is under contract to purchase for a residential development. About a third of the land (foreground) lies within the Village’s corporation limit, while 34 acres in Miami Township is part of an annexation petition. (Photo courtesy of ChrisK Realtors)

The Village of Yellow Springs may soon get a little larger.

At its Sept. 8 regular meeting, Village Council considered an annexation agreement to add close to 34 acres of land on the Village’s southern border for a residential development with potentially more than 200 housing units.

Area developer Oberer Land Developers, Ltd. is under contract to purchase the 51.38-acre property located north of East Hyde Road, east of U.S. 68 and west of Spillan Road. The property, currently owned by Kenneth and Betheen Struewing, was put on the market in February and is listed for $1.89 million.

Oberer, a semi-custom home builder based in Miamisburg, has expressed interest in filing an expedited type 1 annexation petition, which first requires an annexation agreement between the Village and Township, according to a resolution prepared for Council.

At present, 17.6 acres of the property are in the village and 33.39 acres are in Miami Township. Under current zoning, Oberer could build up to 34 units on the Village property, according to Village Manager Josué Salmerón. And up to 71 homes could be constructed on the township portion of the property, according to Township Zoning Administrator Richard Zopf. That’s because the township property, whether or not it is annexed into the Village, will be serviced by Village utilities due to a 2014 court ruling related to the property. If annexed into the Village, the density of the development could be increased further.

An additional half acre adjacent to the Struewing property along Spillan Road and owned by a third party was added to the annexation petition to clear up a records discrepancy.

At the meeting, CEO George Oberer said his company wants to build two types of housing on the property they have a contract to purchase, only a portion of which would need to be rezoned.

“We see two products, one is a conventional, single-family detached home and … a patio home or a condominium unit,” he said, participating in the meeting via Zoom. “We’re trying to be upfront about it and we’ve talked with [Village] staff about it,” he added of their plans.

Calls and emails to Oberer seeking further details were not returned by press time.

Council members went on to ask questions about the annexation agreement and attached development agreement. Also referenced was a multi-year lawsuit between the Struewings and the Village, which ended with an Ohio appeals court ordering the Village to provide water and sewer access to the property.

In the end, three Council members voted to table the resolution until Miami Township considers the agreement and other details are ironed out, while two members voted against tabling the matter.

The township discussed the matter at its Sept. 9 regular meeting, but also did not take action. One of the three trustees, Chris Mucher, recused himself because Ken Struewing is his wife’s brother.

Council Member Lisa Kreeger, who made the motion to table, said the annexation issue was “completely new” to her. She added that it made sense for the Village to wait to consider the legislation until the Township passed it, since they may have amendments for the Village to review.

Council Member Kevin Stokes voted to table for “more clarity,” and Council Member Laura Curliss joined that vote in order to look more closely at the attached development agreement, which she said was only shared with Council members earlier in the day. That document notes that the Village will agree to rezone the property to allow duplexes.

“I’m not saying I’m against it, I’m just saying it promises ahead of time that we’re going to do something,” Curliss said.

But Council Vice President Marianne MacQueen voted against tabling the matter, saying that annexing the property to the Village would allow the developer to create “more diverse housing types” than Township zoning allows, and that development has been slated for that parcel for years.

“Everyone who has paid attention has known that this parcel was going to be developed,” MacQueen said.

MacQueen also said she worried about the “optics” of delaying an annexation agreement.

“Yellow Springs has been known for five decades for discouraging development, in particular, annexation,” she said.

“I don’t want to give the impression that we’re going to continue to do that, because I think we’ve said that we need more housing and we need to move on that,” she added.

The most recent local contention over annexation was in 2007, when Beavercreek developer Doug Miller proposed a 210-unit residential development on 39 acres along Dayton Yellow Springs Road just west of Yellow Springs High School. Following strong community opposition to the development, a then-anonymous buyer purchased the property to stop its -annexation. 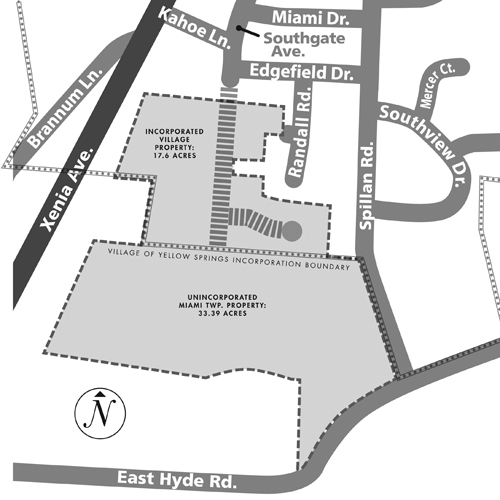 Oberer Land Development is looking to build a new development with an estimated 138 housing units on the Village’s south end. Close to 34 acres in the township may be annexed to create a higher density housing development. (Map data courtesy of ChrisK Realtors)

As for development on the Struewing property, Ken Stuewing, a home builder, tried to develop the Village portion of property twice in the past —  once as a mixed-density development that the Village denied in the 1990s, and later as a standard residential plat, which was stalled by the housing market decline, according to previous News reporting.

Then, in 2009, the Village declined to grant water and sewer access to the Struewing’s township property, which then also included two homes on East Hyde Road, citing a Village policy that dates back to 1992 to not extend utilities beyond its borders without first annexing.

The Stuewings sued, arguing that the property’s former owner, then-Village Manager Howard Kahoe, granted an easement to the Village in 1963 to build Village sewer and water lines across his property in exchange for free water and sewer tap-ins. The Village believed that easement was invalid because it was self-serving, there was no record the Village approved it and it was filed 11 years after it was granted.

After the Village lost the initial court case and two appeals, the tap-ins were finally completed in 2014.

But does the Village have a choice over whether or not to annex the property? And what control could it have over how the property is developed?

According to Village Solicitor Breanne Parcels in a later interview, if the property meets state requirements, the Village must pass an annexation agreement with the Township.

“The Village has to pass some sort of legislation once they get communication from the owner or agent,” she said.

“A lot can be negotiated,” she said. “The annexation agreement is for resolving issues that arise.”

Since the Village will have to extend utility services due to the court ruling, it makes sense to annex the property so the Village could expand its tax base and reap the income tax benefits of new construction, according to Salmerón in a later interview.

“It’s advantageous to the Village to annex the property,” he said.

New development would additionally bring more students into the local school system and spread out the costs of maintaining local infrastructure among more households, Salmerón added. Meanwhile, it would not add significant utility costs because the sewer would be gravity-fed and the Village’s water plant has additional capacity. Additional road maintenance would also not be a large expense, he added.

In response to some Council hesitation to approve the annexation agreement at the meeting, Salmerón said the agreement is just the first step in a “lengthy process” for the development to become reality.

“This doesn’t make development happen on the parcel,” he said. “There are plenty of public conversations to be held in the near future and plenty of opportunity for the public to have input on what’s going on at the site.”

After an annexation agreement, a development agreement would be required, followed by a rezoning process, which would provide additional opportunities for the Village, and villagers, to weigh in, Salmerón noted at the meeting.

Parcels additionally stated that the development agreement attached to the annexation agreement was only a draft that would need to be approved again by Council. She said that a draft development plan must be submitted with an annexation petition.

According to the draft development agreement, the Village would extend municipal water and sanitary sewer services with rates the same as other Village incorporated areas, not require the developer to bury power lines and approve a rezoning of the property to allow 49 duplexes on the southwestern portion. That could bring the total number of housing units on the property to more than 200. However, the developer is only proposing 138 units be built on the property, according to Salmerón later in the week. Draft development plans have yet to be made public.

At the meeting, Council members noted that the need for more housing in the village has become acute in recent years, citing the 2018 Bowen Housing study, which found that the local housing market could accomodate 500 new housing units in the next few years.

Also joining Oberer in the proposed annexation is Frank Doden, Planning Commission chair, and Lori Askeland, who jointly own a 6.7-acre property across Spillan Road. While their property is already in the Village, due to a discrepancy between the legal description and county records, the eastern portion of Spillan Road remains in the township, according to Salmerón.

“We are annexing it because we need to bring in their side of the road [to the Village],” he said.

Other items from the Council agenda will be covered in next week’s News.