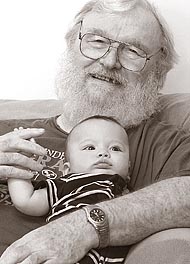 Bob was raised in Wilson, N.C., and as a child, often vacationed on a homemade houseboat on the Neuse River near Morehead City. In high school, he was an Eagle Scout, began a lifelong obsession with birdwatching, and won a scholarship to the University of North Carolina. He joined a demanding program nicknamed the “Suicide 50,” where he studied mathematics, physics, English and matinee movies. In 1962, he spent a year in Germany and met a charming English woman named Liz Visick. Two years later, they were married.

During the Vietnam War he joined the U.S. Air Force. He flew F-4 fighters on more than 400 missions over two tours in Southeast Asia. In 1981, he achieved a lifelong goal of seeing 1,000 species of birds — he added another 775 in subsequent years. After raising four children, he retired from the Air Force and moved to Yellow Springs. In the 1990s, after a divorce and struggles with clinical depression, he fell in love with Bonnie Keller and moved to Wilmington, Ohio. There he developed an affection for cats, taught mathematics to inmates and birdwatching to college students, and perfected his spaghetti recipe. He returned to his lifelong interest in ecology, putting his mathematical training to use in remote sensing and conservation biology. His work took him to South Africa, Guatemala, Brazil and the Everglades, where he worked on the endangered Cape Sable seaside sparrow. In 2015, he returned to Morehead City, N.C., and the summertime haunts of his childhood.

He was a Venn diagram of contradictory interests and talents: a fighter pilot, a math nerd, an intrepid birdwatcher. He followed his own interests wherever they led, pulling others along: he hosted a weekly classical music hour on public radio; played chess with four small children simultaneously; pulled those same poorly equipped kids up crags in the soggy British countryside; led caravans of birders to remote New Mexico canyons; learned to sail in north Florida bayous. He had a storehouse of funny sayings that echo in his children’s heads to this day. “Never use brains when brute force is sufficient” was a favorite. He drew in listeners and entertained strangers with his offbeat wit, and he out-argued all comers with a mix of broad knowledge, keen logic and a commanding Southern accent. As a father, he was both loving and demanding. He gave his children an extraordinary upbringing that was spent outdoors as much as possible, where he taught self-reliance, the proper way to build a campfire, and above all, the undimmable virtue of building character.

A memorial service will be held for family at a later date. In lieu of flowers, please vote on Nov. 3.