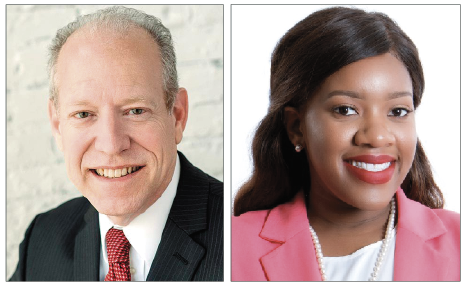 The News continues its election coverage this week with profiles of two more area candidates. Both candidates are Democrats with support among Yellow Springs’ heavily Democratic voters.

In the final weeks of one of recent history’s strangest campaign seasons — unfolding during the COVID-19 pandemic — Desiree Tims said she’s feeling optimistic.

The 32-year-old Dayton Democrat is running for election to the U.S. House to represent Ohio’s 10th Congressional District, covering Montgomery, Greene and Fayette counties. She’s up against incumbent Republican Rep. Mike Turner, also of Dayton, who is currently serving his ninth term in the U.S. House. Turner won handily in 2018, with 55.9% of the vote. But Tims argues that Republican-leaning Ohio District 10 is “purple” — Sen. Sherrod Brown, a Democrat, won here in 2018 — and can be flipped blue.

“I think we’re going to win,” she said in a recent video interview with the News.

Tims, who has been connecting with area residents virtually and through socially distanced events, said the pandemic is the top issue on voters’ minds. People are reeling from having so many aspects of life upended all at once, she said, ticking off job losses, the threat or reality of eviction, health care worries, difficult choices about children’s schooling and the overarching stress of quarantine.

“People are stretched thin,” she said.

Tims said she’s running because she believes she can help. Raised in West Dayton, Tims is the granddaughter of a sharecropper-turned-steelworker, and the first in her family to attend college, at Xavier University. After graduation, she headed to Washington, D.C., working in the first Obama White House, as a Congressional staffer and for several national nonprofits. She earned a law degree, at night, from Georgetown Law, graduating in 2019.

Among her takeaways from her time in the nation’s capital was how few people she met who were like her — Black, female and working-class from the industrial Midwest.

“I was in a lot of rooms of privilege, and I didn’t see people like me,” she said.

That’s one reason she’s running for U.S. Congress. Another is to represent the concerns of her district in ways she said she feels Turner hasn’t, citing his “failing grades” from organizations such as the NAACP and the League of Conservation Voters.

But while politics was in the back of Tims’ mind when she returned home to Dayton in May of 2019, she didn’t expect to throw her hat into the ring so soon. Events converged to persuade her to run. Days after her homecoming, a KKK-affiliated group rallied in downtown Dayton. Then the Dayton area was devastated by a tornado outbreak. And on Aug. 4, a mass shooter killed nine people and injured 17 others in the Oregon District.

“I thought, ‘My God, what is happening to my community?’” she said.

She declared her candidacy in mid-August, and won the delayed March Democratic primary with 70% of the vote.

On the — virtual — campaign trail since then, she’s presented herself as a “fighter” for ordinary Ohioans, a protector of the middle class and the American dream. Her website highlights progressive policy proposals for 16 different issues, ranging from education, health care and jobs to gun safety, the environment and immigration. Asked about her priorities among these, Tims said two issues stand out to her.

The first is gun violence. Tims supports universal background checks for gun sales, a ban on assault weapons and red flag laws that allow law enforcement to intervene and remove guns from individuals who pose a threat to themselves or others.

With the Oregon District shooting, Dayton “unfortunately joined a club of other cities” that have experienced traumatic gun violence, Tims said. “We need to come together as a community and act,” she added.

Her second priority issue is health care, including shoring up the Affordable Care Act. About 56,000 people in our area rely on the health insurance marketplace for coverage they otherwise wouldn’t be able to afford, according to Tims.

“We need to protect that,” she said, adding that her views about health care have been shaped by her mother, a nurse.

Tims favors the Medicare public option, a policy proposal that would provide coverage to people unable to afford private insurance, or who don’t qualify for private plans because of pre-existing conditions. Under this option, people able to pay for private insurance could continue to do so.

She sees the Medicare public option as “an important first step” toward universal health care, sometimes called “Medicare for all.”

“Universal health care is not something we can do overnight,” she said.

In recent weeks, the contest between Tims and Turner has heated up, with both sides filing campaign complaints with the Federal Election Commission, or FEC. Turner has accused Tims of being paid illegally via the Ohio Democratic Party, an allegation Tims called “baseless.” Tims in turn has charged Turner with the illegal use of campaign funds, which Turner denies.

By the end of the third quarter, Tims had slightly outraised Turner, with $1.58 million to his $1.53 million, and more cash in hand, according to the website of the nonpartisan Center for Responsive Politics.

Tims said she’s proud of the funds and supporters she’s garnered, including in Yellow Springs, a significant base of support. She spoke here in August at a rally in support of the post office and against changes that could delay election mail or disenfranchise some of the millions of Ohioans voting by mail this election season.

Tims sees boosting turnout among younger and historically disenfranchised voters as her path to victory on Nov. 3.

“We have to turn out the vote to win,” she said.

Earlier this year, she teamed up with Dayton rapper YelloPain to co-produce a video called “My Vote Don’t Count.” The three-minute video fights back against the voter apathy encapsulated in its title. At its conclusion, Tims offers this message: “So every time you don’t show up because you think it doesn’t matter, someone else is happy that you don’t show up, so they can make that decision for you. Vote.”

Another Daytonian is seeking a seat in a different branch of government.

Criminal litigator Marshall Lachman is running for election as a judge for the Ohio Second District Court of Appeals. He’s vying with Dayton appellate lawyer Chris Epley to fill an open seat on the five-member appeals court.

Lachman, who is 56, comes from a family of lawyers, he told the News in a recent phone interview. Both his grandfathers were lawyers, and he followed the same path, initially working in Illinois as a civil litigator and for the past 17 years working in Ohio as a criminal defense attorney.

“It’s in my DNA,” he said of his chosen profession.

A 1988 graduate of The Ohio State University Moritz College of Law, Lachman said he has spent thousands of hours in courtrooms, including handling over 100 jury trials and a similar number of appeals — many of them in the second appeals court where he hopes to serve as judge.

The Second District Court of Appeals covers Champaign, Clark, Darke, Greene, Miami and Montgomery counties. It is one of 12 appellate courts in Ohio whose primary purpose is to hear appeals from lower courts, according to a description on the website of the Ohio Supreme Court, which sits above the courts of appeal in the state’s multi-tiered judicial system.

While the Ohio Supreme Court hears just a tiny fraction of cases filed with the court, appellate courts are required by law to hear almost all cases in which an appeal is sought, according to Lachman. That makes these courts essential to due process, or the protection of people’s rights under law.

“It’s the court of last resort for most people,” he said.

Cases are heard by a three-judge panel assigned randomly from the court’s five judges. At least two judges must agree on a decision, while one judge may dissent.

With the power to affirm, reverse or modify the decisions of trial courts, appellate courts are sometimes viewed as “grading the homework” of the lower courts, according to Lachman.

“It’s not the job of the appellate court to make law. It’s their job to make sure the law is applied correctly,” he said.

Appeals courts judges are considered nonpartisan. Lachman is a Democrat and Epley is a Republican, but those party affiliations will not appear on the ballot. That’s because judges are supposed to be party-neutral, Lachman explained.

With 20 years in private practice, Epley is chief appellate attorney in the Vandalia municipal court, and has judicial experience as a part-time magistrate in Dayton Municipal Court, according to his campaign website.

Lachman has 32 years’ experience as a civil and criminal litigator. He lacks direct judicial experience, but said his legal experience qualifies him to be a judge. Ohio law requires that appellate judges be attorneys who have practiced law for at least six years.

As a criminal defense lawyer, Lachman focuses on representing people charged with serious felony offenses. He is certified by the Ohio Supreme Court to serve as lead counsel for defendants in death penalty cases, and has handled numerous such cases as lead counsel or co-counsel. And he is certified to work as a Guardian Ad Litem for abused, neglected and dependent children.

“I don’t say ‘no’ when I’m called for difficult cases,” he said.

In recent years, Lachman has been recognized by Montgomery County courts for representing indigent defendants — those who can’t afford legal counsel — and for his work with children and parents in juvenile court.

“Everyone needs a voice. That’s the reason I do what I do,” he said.

Ohio court of appeals judges are elected for six-year terms. As set by law, the position in 2021 will pay an annual salary of $166,167.