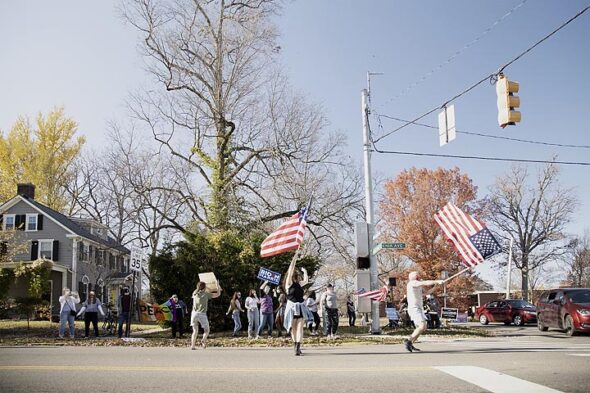 Villagers danced in the streets on Saturday, Nov. 7, soon after it was announced that Joe Biden had won the presidency. People waved American flags and Biden/Harris signs while dancing to such tunes as “Hit the Road Jack,” and “I Feel Good.” The impromptu celebration started after Gyamfi Gymerah and Bomani Moyenda brought their drums to the weekly peace vigil, which takes place at noon at the corner of Limestone Street and Xenia Avenue. Michael Casselli followed with a loudspeaker, and the music and joyful whooping attracted people from around town. The election was called for Biden at 11:24 a.m. that day after four days of tallying votes. (Submitted photo by Matthew Collins)

Emotions ran high, and a pandemic raged on, but a historic election unfolded without incident in Yellow Springs on Tuesday, Nov. 3.

Likely because many village voters cast absentee ballots, turnout was light throughout the day, according to several local residents who worked the polls at Antioch University Midwest on Election Day.

Poll worker Rebecca Potter estimated local turnout at around 750 voters. While some village voters queued up in the dark for the opening of polls at 6:30 a.m., that early surge proved to be the day’s only rush.

“We expected another rush at 4:30 or 5, but there was not a noticeable increase,” poll worker Jerry Sutton said. He added that voters came in throughout the day in a “trickle.”

Voting went smoothly overall, according to a third poll worker interviewed by the News, Anthony Fife. Having worked the polls a total of five times over the years, Fife said last Tuesday was notable for its calm atmosphere, especially in contrast to the 2016 presidential election.

“Four years ago, it was pretty intense,” he said.

According to Yellow Springs Police Chief Brian Carlson this week, local police maintained a presence outside Antioch University Midwest for safety reasons throughout Election Day. But an officer was not posted inside the polling place this year, as has been the case in previous years, to avoid heightening tensions around the election process.

Police received just one election-related call for service during the day, Carlson added. That call was a complaint about insufficient social distancing within the polling place, and was referred to Village mediation.

Potter, who previously staffed a polling location in Fairborn during a heavily partisan election in 2008, agreed that the day came off without major hitches.

“The poll workers did an amazing job and the process is good overall,” she said.

But Potter contacted the News after Election Day with several concerns connected to the volume and circumstances of provisional voting. Forty-three provisional ballots were cast in Yellow Springs last Tuesday, according to Potter, and it wasn’t always clear to her or to voters why a provisional ballot was required.

“There needs to be clarification on when a provisional ballot is given and what the voter has to do after casting it,” she said.

The website of the Ohio Secretary of State provides some information relevant to those concerns.

A provisional ballot “is used to record a vote if a voter’s eligibility is in question and the voter would otherwise not be permitted to vote at his or her polling place,” the website states.

Scenarios in which a provisional ballot is required include when a voter isn’t able to provide an acceptable proof of identity; when a voter has moved and is registered to vote at a different polling place; and when a voter has already requested an absentee ballot.

That third scenario cropped up regularly last Tuesday, according to local poll workers.

Some voters who had requested an absentee ballot opted to vote in person on Election Day instead — not realizing that in making the request they had effectively committed themselves to voting absentee. But other voters stated they hadn’t received a requested absentee ballot and felt they had no choice other than to show up at the polls.

“It was frustrating for them, and I get it,” Fife said.

According to Potter, some local voters required to cast provisional ballots were visibly upset, and at least two voters refused to vote because they perceived doing so “would be worthless.”

Provisional ballots are cast “provisionally” until election officials can verify a voter’s eligibility, according to the Secretary of State’s website. Voters who have provided acceptable proofs of identity typically do not need to follow up with their county board of elections, but those that did not provide such proofs must appear in person at the elections board within seven days of the election. That date has already passed.

According to a state tally, there are 2,256 outstanding provisional ballots yet to be counted in Greene County. Precinct-level breakdowns are not listed.

If fewer village voters showed up at the polls last Tuesday due to the pandemic and other factors, many more Yellow Springs residents shifted their votes to absentee ballots this year — following trends in the county, state and nation as a whole.

Locally, the number of absentee ballots cast during the 2020 presidential general election more than doubled over 2016, according to figures accessed from the county’s absentee reporting website for Yellow Springs precincts 440, 441, 442 and 443. At least 1,493 villagers voted absentee in this election, versus 601 in 2016.

Countywide, absentee ballots doubled from 16,851 in 2016 to at least 35,204 this year. Absentee ballots represent about 40% of at least 87,604 votes cast in Greene County during the 2020 presidential general election.

Early in-person voting also increased substantially across the county this year over 2016, while remaining virtually the same in Yellow Springs from 2016 to 2020.

Socially distanced lines were extra long and waits were up to two hours during early voting hours, according to anecdotal reports.

Voter turnout figures for Yellow Springs and other communities in the county remained unknown as of early this week. The Greene County Board of Elections has not yet released precinct-level results following last Wednesday’s release of unofficial county results. Multiple calls over several days to the county elections director regarding when precinct results would be made publicly available were not returned.

Turnout across Greene County was at least 74%, and will likely rise somewhat from that figure once final results are tallied.

And regarding absentee ballots, Greene County will continue to count ballots postmarked by Nov. 2 that come in by Nov. 13, as required by state law. Those additional ballots will be part of the final vote tally that will be certified by the Greene County Board of Elections on Nov. 18 and subsequently released as the final certified results.

Voters might have been sparse locally, but poll workers were abundant last Tuesday.

Despite a slow start to poll worker recruitment in the summer amid pandemic fears, Greene County managed to recruit close to the minimum number of poll workers needed countywide, 498 out of 584, according to state reporting.

At least a dozen of those were staffing Antioch University Midwest on Election Day, as well as two election observers who, in contrast to 2016, seemed to have little to do, according to Fife.

“There were a lot of us,” he said of polling place staff.

The day was long, as always — about 15 hours — and working conditions were a little more challenging because of the pandemic. Poll workers wore masks all day, and “we were wading in hand sanitizer,” according to Sutton, who added he felt comfortable with the setup overall.

Curbside voting was available to any voter who requested it, though just a handful of voters chose that option. Fife was one of the local poll workers who donned a plastic apron, gloves, mask and face shield to check voters in at the curb and facilitate voting from their vehicles.

“I donned the hazmat equipment a couple of times,” he said.

Despite the typical and pandemic-specific challenges of Election Day, Fife said he keeps coming back to work the polls because he enjoys “being that close to the democratic process” — a theme echoed by other poll workers.

“My grandmothers did it for years and years,” Fife said. “I call my surviving grandmother from the polls. She likes that.”

Sutton, who was serving as a poll worker for the first time, said he found the experience “enlightening.”

“It makes you appreciate the process just a smidgen better. Working the polls should be a prerequisite for running for public office,” he said.

At the same time, Sutton wondered if the nation might be better served by a more standardized election process to replace the patchwork of state-led protocols recently and vividly seen, for example, in different states’ handling of absentee ballots.

“The federal government could try to standardize it, but the states see elections as their turf,” he said.

And Potter observed that while she was impressed with the dedication of poll workers, she felt some aspects of the voting process and the procedures for handling votes were unclear to voters and poll workers alike. Involving more people in elections, educating voters about the progress of their ballot through the system and, in some cases, improving aspects of that system would improve voter confidence in free and fair elections, according to Potter.

“We can work to figure out more ways to instill trust in the system,” she said.

The News will print precinct-level results and other election-related information once it becomes available from the Greene County Board of Elections.