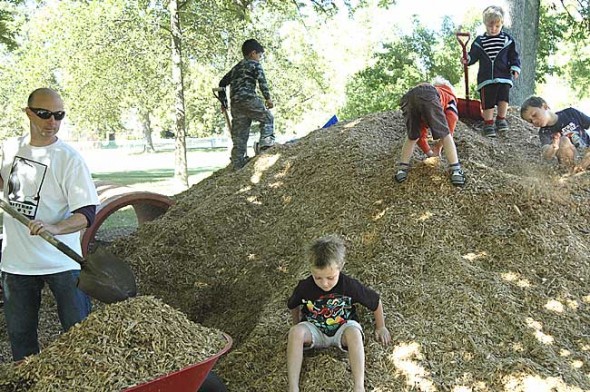 Mills Lawn School parents, kids, teachers and staff, including Principal Matt Housh, grabbed shovels in September 2010 to spread a new layer of mulch on the playground, providing a soft landing for any students who might take a tumble. Shown above are, from left, parent Chris Wyatt with, on the hill from left, Tavien Clay with a shovel; Reese Spurgeon, sliding down; Bob and Morris Wyatt; and Max Banaszak-Moore. (YS News archive photo by Diane Chiddister)

AACW Blues and Jazz Fest “Now in its 13th year, the festival was the conception of Faith Patterson and the late Bill Chappelle. … The festival now attracts from 3,000 to 5,000 attendees over the weekend.”

“Burning ban issued. The Greene County Fire Chief’s Council has issued a countywide ban on open burning due to the extreme dry conditions.” [This was lifted after two weeks.]

New college president. “Mark Roosevelt, great-grandson of Teddy, former Massachusetts politician and current superintendent of the Pittsburgh schools, will be the new leader of the revived Antioch College.”

“Wildlife raising a stink in village. A mild winter, and even milder, wet spring created an ideal birthing climate for the skunk population, most of whom, apparently have moved into Yellow Springs.”

Dogs ran free. “A flood of calls from all sections of the Village this morning sent the Yellow Springs police and Greene County dog catchers on a drive to pick up the invading animals.” Dogs used to freely roam the village.

“All quiet after near-riot against dog catchers Monday. Charges filed … after an emotion-packed clash with a ‘mob of 40 to 60’ on the Antioch College campus, have been dropped.”

City or Village? “Yellow Springs 1970 population is 4,604 according to figures released … by the U.S. Bureau of the Census. The widely held conviction of the past half-decade that Yellow Springs would become a city (5,000 population) was apparently unfounded.” [YS population at the 2010 Census was down to 3,487.]

Slot machines. “Five cent slot machines and punch boards have made their appearance in various business places in town. The gambling devices are not designed to promote good morals or high thinking. They do stimulate a recklessness with young men’s money and no one benefits except the fellow who owns the machine. It is hoped that the proper officials will take the matter in charge.”

Movies at the Opera House. “ A fine new machine has been installed. … For the present the house will be opened on Tuesday, Thursday and Saturday.”