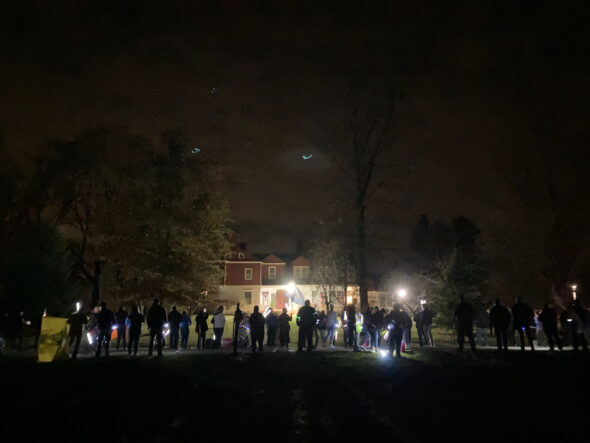 On Friday, Nov. 20, nearly 200 demonstrators gathered outside Gov. Mike DeWine’s home in Cedarville Township to protest his and the Ohio Department of Health’s COVID-19-related mandates, including the statewide mask order and the 10 p.m. curfew.(Photo by Reilly Dixon)

The protest was in direct response to Ohio’s ongoing mask mandate and statewide curfew. The mask order has been in effect since July 23 and mandates that all individuals in Ohio must wear facial coverings in public at all times. That order was recently reissued and strengthened, with penalties for noncompliant businesses.

The Ohio Department of Health-issued statewide curfew began on Thursday, Nov. 19, and is in effect every night for three weeks from 10 p.m. to 5 a.m. These mandates have been issued in response to a recent surge in COVID-19 cases, hospitalizations and deaths in Ohio. As it currently stands, Ohio has experienced over 6,000 COVID-related deaths.

The goal of the protest was to disrupt DeWine’s evening, “just as he disrupted the lives of all Ohioans,” as one attendee called out from a bullhorn.

Neither DeWine nor his family showed signs of being inside the home during the protest.

From the road directly in front of DeWine’s home, protesters hammered on pots and pans, honked air horns, blared sirens, blasted music from large boomboxes, beat on drums, waved flags, danced, cheered, jeered, yelled and at one point, even set off fireworks — with one round of fireworks directed at DeWine’s home. Car drivers leaned on their horns in support. Children passed out glow sticks to the dancing revelers.

While the messaging in the chants varied, the overall message issued from the protesters was clear: that the safety measures rolled out by the governor in response to the COVID-19 pandemic over the past eight months pose an existential and material threat to the individual liberties of not just those at the demonstration, but Ohioans at large.

Of the 200 protesters present, none appeared to be wearing a mask.

“Wearing masks, staying home, closing businesses — these aren’t [DeWine’s] decisions to make,” said one protester, Karly, over the commotion. Karly asked that her last name be kept off the record, stating her distrust of the media. Her husband, Robert, also declined to give his last name.

“We are a people with Constitutionally protected rights and we won’t let [DeWine] take them away from us,” she said.

The couple, both from Leesberg, about 45 minutes south of Cedarville, learned of the evening’s protest from an event page on Facebook, titled “Dance Party @ DeWine Family Farm.” They said they were encouraged to attend by the high RSVP numbers they saw on the event page.

“When we saw footage of the first party, we said, ‘That looks like fun.’ And since it’s for a good cause, we made a point to come to this one,” Robert said.

Within 24 hours of the Facebook event page’s creation, it had been taken down. Several attendees suspected this was done not by the event coordinators, but by Facebook itself. By at least 3 p.m. on Nov. 20, the day of the protest, the link to the event page was broken. It remains unclear who took the page down.

In attendance at the protest was Ohio Stands Up!, a self-described conservative group based out of Cuyahoga Falls in northern Ohio. According to its website, Ohio Stands Up! is a group “of concerned freedom-loving Ohioans” whose aim is to “challenge the governor’s State of Emergency,” in order to “reclaim Ohio.”

David, an organizer with Ohio Stands Up!, said that the protest was about “more than just masks.”

Like Karly and Robert, David declined to provide his last name, stating that he worried about jeopardizing his job in Toledo.

“The goal is to call attention to the widespread misinformation campaign about the pandemic that DeWine is leading here in Ohio,” he said.

David added that his group, alongside another conservative group, “Make Americans Free Again,” or MAFA, is leading a joint charge against DeWine and the state Legislature for their “unfair and unconstitutional restrictions” and mandates being imposed on Ohio — that these mandates are “hurting Ohioans more than they are helping.”

“Simply put, it’s not not right, nor is it ethical what DeWine has done,” said David. “His restrictions are based on faulty pretenses.”

Transportation to and from the event appeared to be well coordinated. Given the relative remoteness of DeWine’s home — about a mile outside of downtown Cedarville — most protesters opted to carpool.

Protesters largely parked at one of two designated nearby parking locations: the Cedarville Community Library or the Cedarville University commuter parking lot. Organizers set into motion a shuttle service at these two locations to take participants to the demonstration farther down the road. A small fleet of two or three vans continually dropped off demonstrators in small groups over the course of the evening, driving to and from downtown Cedarville. After a couple hours, the crowd swelled to about 200 attendees.

By the end of the evening, however, cars had begun parking on the side of the road leading up to DeWine’s home. A sheriff’s deputy had previously told this reporter that parking was prohibited along the road.

Several officers were posted in their vehicles at either end of DeWine’s road. While  most officers on the scene stood on DeWine’s lawn separating protesters from the home, at least two State troopers interacted and joked with protesters.

Asked about the reasons for and scope of police presence, Greene County Sheriff Greene Fischer said the agency was there to assist the state highway patrol, protect the governor and help manage a large crowd.

“We were there for security reasons on the governor’s behalf,” he said.“If we anticipate a big crowd, then we make arrangements to have people on standby.”

According to Fischer, no citations were issued during the demonstration, and protesters had completely dispersed by midnight — two hours after Gov. DeWine’s statewide curfew of 10 p.m. went into effect. Later reached by phone, officers from both law enforcement agencies present declined to comment on why the curfew was not enforced at the protest.

According to personal Facebook pages connected to the Ohio Stands Up! Facebook page, another demonstration in front of Gov. DeWine’s home is likely being planned for this coming Friday, Nov. 27.

Calls and emails to DeWine’s press secretary seeking comment from the governor were not returned by press time.