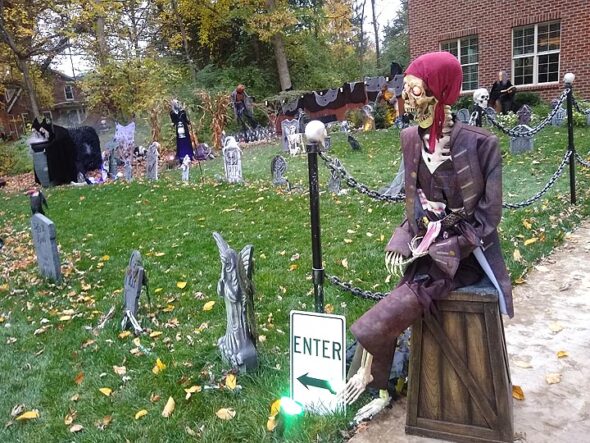 A skeleton stands sentinel at the entrance of the haunted graveyard of the “Highlander Haunting” — the home of Drake, Lynda and Samantha Highlander — on Livermore Street. (Photo by Lauren “Chuck” Shows)

In late September, the Village of Yellow Springs announced that the usual community Halloween activities — bonfires and trick or treating — would be canceled due to the ongoing coronavirus pandemic.

Nevertheless, at the end of October, a front yard graveyard comes alive at night on Livermore Street. Two witches stand over a cauldron, observing a smoking brew, and a ghastly pirate, now nothing but bones, warns those who might venture in: “Avast, lads and lassies! This way to a dastardly haunted graveyard!”

These ghouls reside at the home of Drake Highlander, one villager among many who is adapting his Halloween plans to suit a world and a community that have been adapting to the pandemic for months now.

The haunted graveyard, which features an elaborate setup of stationary and mechanical ghosts and zombies — known around town as “The Highlander Haunting,” and recently announced as this fall’s Village Inspiration and Design Award honoree — has been Highlander’s labor of love for several years. He said part of the impetus behind his creation was not being allowed to go into a family friend’s basement haunted house as a kid.

“My mom said I was too young and it was too scary, and I think that frustration sort of stayed with me,” he said. “So as I grew older I thought, ‘I’m just going to make my own haunted house, how do you like that?’”

The Highlander family — which includes Lynda and Samantha — opened up the haunted graveyard last weekend for several hours on Saturday and Sunday evenings. Unable to hand out treats in the traditional way, this year they offered their pre-Halloween visitors individually sealed goodie bags from a self-serve table in the driveway, as well as a free copy of Highlander’s own 2008 young adult novel, “What Not to Do When You Find a Spaceship.” Dressed as an undead witch, Highlander — who, in the interest of full disclosure, managed to get in a solid jump scare on this reporter — counted close to 50 visitors to the graveyard over the weekend. The family plans to open the graveyard on Halloween night, too, with a rain date of Nov. 1.

Highlander said he gets a lot of joy from watching visiting kids delight in the spooky scenes he’s constructed — especially this year, when many traditional Halloween activities are missing from the village.

“I want to give the community something a little special, a little memorable,” he said. “My favorite part is watching the kids go through it, and then go back through a couple more times — to me, that means I’m doing a good job.”

Halloween is something of an oddity among American holidays — most are centered around family or faith and celebrated in those insular groups, but Halloween has always relied on the tacit participation of the community at large. Young trick or treaters can expect to receive candy from their neighbors, and as they grow, they step into the role of handing out treats from their own lighted porches. The tradition is important enough that some villagers have put together their own pocket communities for this year’s holiday, whittling their slice of the village down to what they consider to be a safer size.

In the Vale, a handful of families have banded together to put on a socially distanced “pumpkin glow” — that is, display of lighted jack-o-lanterns — with trick or treat stations. Elsewhere in town, villager Tami Absi plans to leave candy on the doorsteps of her neighbors — a “reverse trick or treat,” she said. Over at the “triangle” of Whiteman, Livermore and Davis streets — typically a site of one of the annual bonfires — Eric Clark plans to pitch a canopy tent; he hopes that nearby neighbors who feel comfortable doing so might stop by for a hot dog and some socially distanced company.

For Clark and his wife, Jackie, it feels important to mark the holiday in some communal way for their kids, Levi and Paige — particularly the latter.

“Levi kind of rolls with the punches, but Paige has a lot of anxieties about traditions not being carried forward,” Clark said. “So it’s really difficult for her to think that there would not be some sort of a Beggars Night.”

Even so, some traditions remain in the Clark household, like pumpkin carving and the annual display of the two skeletons who sit at a table in the family’s yard.

“Except this year they’re wearing masks and have a bottle of Purell,” Clark said.

Chandra Jones-Graham’s family is participating in an outdoor “trunk or treat” type event with about a dozen other families. Each participating family will decorate folding tables, which will be spaced out on the large property of the event’s host family. Dressed in costumes — and masked — kids will simulate trick or treating by visiting each table to collect pre-wrapped goodie bags while maintaining physical distance.

Jones-Graham said her daughters, Niamh and Meara, are looking forward to Halloween, even though it looks different this year.

“I think they expected the holidays to be unusual,” she said. “And we’ve talked about keeping safe, but making sure that things are still fun.”

Other families are keeping their celebrations close to home with scavenger hunts and family activities. 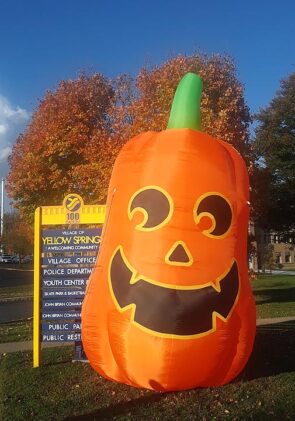 The Village of Yellow Springs got into the Halloween spirit this year with an inflatable pumpkin on the Bryan Center Lawn. (Photo by Megan Bachman)

“We are having our 4-year-old and 1-year-old trick or treat throughout our house, knocking on bedroom, bathroom and closet doors,” Kristi Nowack Myers said.

For some of these families, the pandemic still seems too great a risk to consider celebrating outside of the home.

“We take the pandemic very seriously,” said Kate Hamilton — her family plans to dress up, play games and have a flashlight hunt for candy in the dark at home.

“We are going to make the best of it!” she added.

Levi Cowperthwaite agreed — “Maybe an outdoor, masked, socially distanced event is fine, but it doesn’t feel worth the risk,” she said — and added that she hadn’t realized before how much falls by the wayside when the wider community is removed from the holiday.

“School parties, the parade, trick or treating and all of that are not available,” she said. “I’ve always wanted to make Halloween special for [kids Rocket and Imogene], but I really relied on other people and institutions to help make it special.”

Some folks have admitted to planning an overabundance of at-home activities this year to make up for the loss of tradition.

“We are making a Halloween inspired meal — mummy enchiladas — playing an at-home escape room, hiding candy in our house and watching ‘Hocus Pocus’ [and] we are making our own costumes,” Andrea Carr said.

“Actually,” she added, “it sounds exhausting.”

Her family plans to make skull-shaped pizzas, play games, make potions, paint papier mache pumpkins and cover their home in decorations. The family’s tradition of leaving treats for the Switch Witch — a magical being who takes Halloween candy while the kids sleep and leaves a non-candy gift in return — has always been important to Cowperthwaite’s kids, who are vegan and often can’t enjoy much of their trick or treating haul. They were eager to continue this tradition, which left Cowperthwaite in a tricky spot.

“So we’re going to have a candy hunt in the backyard,” she said. “Which means I have now bought candy to give to my children, who will then give it back to me, and none of us are going to eat it.”

She laughed, adding, “How did I paint myself into this corner?”

Despite the changes wrought by COVID-19, the celebration of the season will go on unchanged for some. Alisa Joi Meier, who is Pagan, observes Samhain, a centuries-old celebration of Celtic origin that traditionally marked the end of the harvest. For Pagans, like those who celebrated in the ages before them, Samhain marks a time of year when the barrier between the physical and spiritual worlds is at its thinnest. For that reason, Meier will celebrate, as she has for many years, with a practice known as a “dumb dinner.”

“It means that I set places at the table for our loved ones who have passed on and we don’t speak, so that those who have died have the chance to come to the table to talk to us if they want,” Meier said. “I make homemade chili and breadsticks — sometimes my kids didn’t do the dumb dinner when they were young, but the chili and breadsticks has always been a huge deal for them.”

Halloween, she said — which shares some traditions with Samhain as it was practiced long ago — tends to frame the dead as fearful or thrilling. For many Pagans, Samhain is a time to honor the dead.

“Our loved ones we tend to think of more as heavenly beings when they die,” Meier said. “Other dead things, though, are gross or scary, like skeletons and zombies — but the practice of celebrating the dead can be more like a memorial day, if you look at it that way.”

Meier looked forward to spending Oct. 31 in spiritual contemplation with her family, eating chili in silence — and maybe topping off the evening with some light fun at the Ouija board. This year’s Samhain felt especially significant to Meier, who recently lost her mother.

“The funeral was thousands of miles away and I couldn’t be there, so it will be a lovely dinner this year,” Meier said. “I’ll set a place for her at the table, light a candle, and invite her in.”

Despite the cancellation of Beggars Night and bonfires, MTFR hosted a drive-thru trick or treat event at the new fire station on Xenia Avenue on Halloween. Earlier in the day, YS Speaking Up for Justice held its final rally for the year, and passed out candy to kids in attendance, who were encouraged to attend in costume.