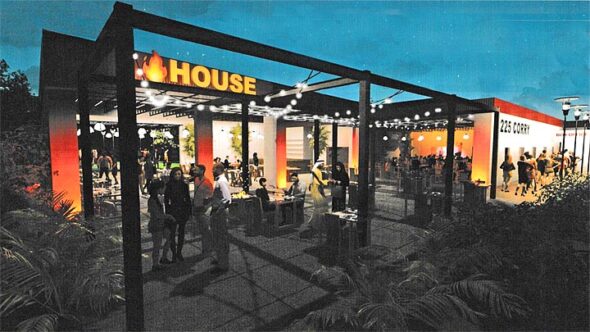 The longtime Miami Township fire station is being sold to villager and comedian Dave Chappelle for a comedy club. A planned renovation will create a performance space and restaurant in the 6,000 square foot building, according to architectural renderings. (Architectural rendering by Max Crome)

The Yellow Springs Development Corporation, or YSDC, disclosed the buyer of the fire station this week after originally approving the purchase in September.

Chappelle’s company, Iron Table Holdings, will renovate the longtime fire station at 225 Corry St. into a comedy club featuring both a performance space and restaurant, according to plans shared by the YSDC. The venue’s capacity is estimated at 140 people, and patios are slated for the property along Corry Street and the Little Miami Scenic Trail.

According to YSDC member Corrie Van Ausdal, Chappelle’s plans call for a “brick and mortar” version of the socially distanced, outdoor shows that the comedian organized this summer at the Wirrig Pavilion in the township. Those shows drew hundreds of attendees at each performance and featured a revolving slate of well-known comedians and musicians.

A quasi-governmental group with representation from the Village of Yellow Springs, Miami Township, Yellow Springs Schools, Antioch College and the Yellow Springs Community Foundation, the YSDC handled the sale of the fire station for the township, whose trustee offices and fire station were recently relocated to a new facility on the south side of town.

According to YSDC representatives this week, the proposal submitted by Chappelle’s company rose to the top primarily because of its potential economic impact.

Of the three leading proposals the YSDC considered, Chappelle’s plans ranked the highest in five of seven categories: profits/wages/taxes, environmental impact, local impact, diversity and COVID-19 considerations, according to a YSDC press release. The other categories were people/culture and job creation.

“We believe it is the best and highest use of the fire station space, as an entertainment venue that does not directly compete with local businesses, and it helps draw additional commercial activity into the Central Business District,” according to Lisa Abel, YSDC’s board president, in the release.

“From the board’s standpoint, it was the best impact for economic development,” Abel later added by phone. “The board was excited with this proposal.”

Van Ausdal, a member of the YSDC subcommittee that took inquiries and reviewed bids, said that Chappelle’s proposal “shined” in several ways. In addition to promising a “high impact” when it comes to local jobs and taxes, it would also create ancillary benefits for businesses in town that cater to visitors. 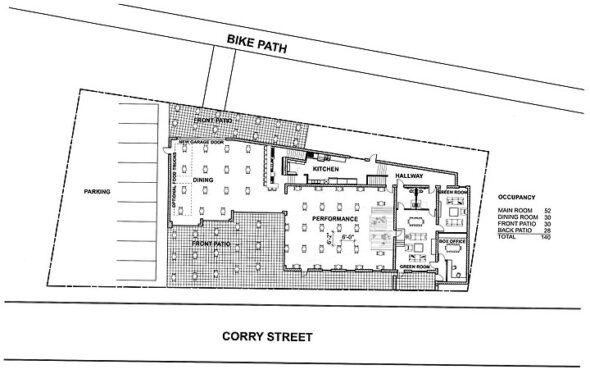 “It was the multiplier effect of having a venue like that for people to come not just for an evening, but a weekend, so the impact on restaurants and shops, hotels and Airbnbs,” Van Ausdal said of the potential benefits.

Van Ausdal added that the comedy club will also provide a place “for professional artists to have a place to create.”

“It will feature heavy hitters coming in from out of town, but we also have a lot of artists … who don’t have a place [to perform],” she said. “The idea that we may have a place for that is exciting to me.”

The fire station purchase is only the latest in a series of property purchases in the village the popular entertainer has made over the last year.

Through his holding company, Iron Table Holdings, Chappelle purchased two additional properties in the village this month — the Union Schoolhouse and 150 Railroad St. — adding to a growing list of real estate acquisitions in the downtown area.

In response to a News request on Monday for comment on the fire station purchase, Chappelle’s public relations manager, Carla Sims, said the comedian was traveling and unable to immediately respond.

In response to a request for an interview on the Union Schoolhouse purchase earlier this month, Sims responded, “Dave is not doing interviews at this time.”

“If that changes and he wants to discuss the purchase, I will let you know,” she wrote.

A follow-up email seeking comment through other means was not returned.

Chappelle did not personally present his plans for the property to the YSDC; his architect, Max Crome, and attorneys facilitated the purchase, according to YSDC representatives.

Although the YSDC approved the sale in September, an error in the real estate contract and an illness in the family of the buyer caused delays in closing the sale and revealing the identity of the buyer.

A final purchase price was not released by press time, as the real estate contract is still being finalized. The 6,027-square-foot building constructed in 1956 was originally listed for $400,000, and the township will be guaranteed at least $320,000 from the sale, according to an agreement between the YSDC and township. The fire station went on the market in the summer.

According to Abel, the YSDC hopes to close on the property in late February or early March. A provision of the contract requests that the buyer return to the economic development group six months after closing with an update on the progress toward opening, she added.

The sale of the fire station was the first real estate transaction for the YSDC, which was formed earlier this year to promote economic development.

In a special online meeting on Sept. 22, the YSDC approved the sale by a vote of 7–1, with two abstentions. The vote followed an hour-long executive session on the matter that was not open to the public.

Voting “yes” were Abel; Van Ausdal; Steve Conn and Steve McQueen, who represent the school board; Lisa Kreeger, from Village Council; Hannah Montgomery, from Antioch College; and Karen Wintrow, from the Chamber of Commerce. (Wintrow has since left the community and the group.)

Reached for comment this week on her “no” vote, MacQueen said that she preferred another bidder’s proposal for the property, which was more “community-oriented” and provided a “much-needed community service.”

“That’s a prime location and I really wanted to see something that I thought would be a benefit for the whole community,” she said. MacQueen elaborated that she was looking for a proposal that not only served the whole community but also reflected the Yellow Springs community.

Two other “leading proposals” were considered, according to the press release. However, one of those contenders withdrew from consideration not long before the vote. All three of the final contenders were local, Abel confirmed.

“From the board’s position, this was the most thoughtfully designed and the best business plan,” Abel said of Chappelle’s plans, by comparison.

In response to a question from the News, Abel said that the winning proposal was not the proposal with the highest financial offer.

“We did not go with the highest bid,” she said.

Other inquiries into the property that didn’t make the final round of three included “several new business ideas” that “may need more time or funding to mature,” the release added.

Abel stated in the release that the process was “exciting for the Development Corporation” because “there are so many creative ideas for the use of commercial space in Yellow Springs.” The YDSC may revisit some of the proposals “as other real estate opportunities arise,” she added.

Ahead of the YSDC vote, the fire station subcommittee recommended that the larger group approve the sale to Chappelle’s company.

That group used a “scoring matrix” to evaluate the different proposals across the seven categories, Van Ausdal explained. From there the group looked at the three top contenders “with a magnifying glass,” she said. Moving forward, the group plans to learn from the experience and hone the process for other properties, Van Ausdal added.

Members of the subcommittee included Van Ausdal, who is one of two township representatives; Village Manager Josué Salmerón (who later left the subcommittee after a conflict of interest arose) and Jeannamarie Cox, director of the Yellow Springs Community Foundation. Taking Salmerón’s place was Community Foundation board member Roger Reynolds. Salmerón and Cox are invited participants, but not voting members, of the YSDC, and Reynolds is not a member of the group.

Chappelle has made several other local real estate purchases this year involving commercial properties or properties in the downtown area. Plans for some of the properties have been publicly disclosed, while others have not.

Iron Table Holdings closed on the historic Union School House at 314 Dayton St. on Dec. 3, buying the 1.6-acre property for $480,000. The 13,332-square-foot former school building built in 1872 has previously been the Village municipal offices and commercial rental spaces. It was listed in 2017 by former owner, local builder Jonathan Brown, for $590,000.

On Dec. 9, Chappelle’s company finalized the purchase of 150 Railroad St., the former home of local Chamber of Commerce Director Karen Wintrow and her husband, architect Ted Donnell, for $600,000. The property includes a 1,848-square-foot house and a 632-square-foot bungalow built in 2017, and is adjacent to a property that Chappelle purchased in 2015.

Other purchases this year include 403 Xenia Ave., a property donated to Antioch College by villagers Esther and David Battle last summer, for $390,000, and 309 Xenia Ave., home to Smoking Octopus, for $485,000.

In 2018, Iron Table Holdings purchased a downtown property encompassing three attached buildings at 239, 241 and 243 Xenia Ave. for $599,000. Both that property and the property at 403 Xenia Ave. were the subject of Village Planning Commission conditional use hearings in August. The downtown property is being renovated as a nail salon on the bottom floor and residence on the top floor, while the 403 Xenia Ave. property is set to become apartments, according to plans presented at the Planning Commission meeting.