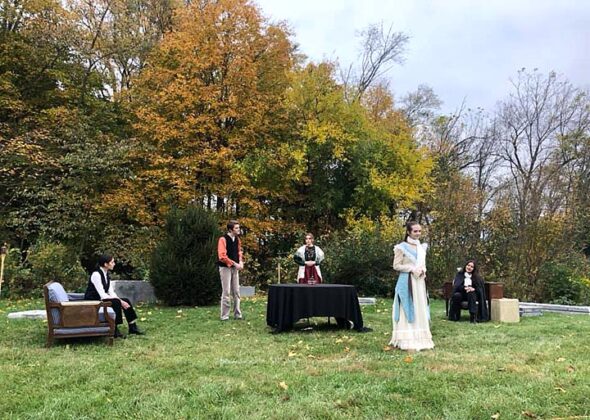 Cast members of “Dracula” filmed a scene while physically distanced on the play’s outdoor set on the YSHS soccer fields. From left: Daphne Trillana as Seward, Jonas Bahn as Van Helsing, Sophie Bottelier as Margaret, Sophia Lawson as Lucy and Stella Lieff as Dracula. (Submitted Photo by Lorrie Sparrow-Knapp)

When asked if it had always been her plan to stage a filmed version of “Dracula” as this year’s YSHS fall production, performing arts teacher Lorrie Sparrow-Knapp laughed.

“I would like to tell you I had a plan — I really would,” she said.

All things being equal, if Sparrow-Knapp could have had it her way, she would have picked up where she and the performing arts program had left off last school year: “The Fair Maid of the West” was in production when the pandemic shut everything down. Though much of the principal cast of that show has graduated, Sparrow-Knapp said she had cast some younger students as understudies who could have stepped into the main roles.

“I even thought about bringing back some of the kids who’d graduated,” she said.

But all things are not equal; the pandemic continues, and along with it the knowledge that the stage — and the auditorium — aren’t safe for the time being.

So it was back to the drawing board — one that theater producers have faced in the past.

“Pandemics and theater are old, old nemeses,” Sparrow-Knapp said, pointing out that many theaters reopened with a flourish after closing during the deadly influenza pandemic of 1918; according to a New York Times story from this summer, Broadway adapted to the early 20th-century outbreak, not by closing, but by reducing audience sizes, staggering curtain times and outlawing smoking.

“And Shakespeare wrote ‘King Lear’ during the plague — and it’s a masterpiece,” Sparrow-Knapp said. “So people find ways.”

Sparrow-Knapp’s way came after considering a variety of options: a year focused on literary analysis, or maybe audio plays, or even collaborative work via video calls.

“I started looking at a lot of different things,” she said.

Then came a fateful email from the Ohio Educational Theater Association; this year, said the email, the Ohio Thespian State Conference — the annual student theater competition at which YSHS has been recognized in recent years — would be virtual, featuring filmed plays.

“It’s not like I had this brilliant idea — I’m just such a fierce competitor that I thought, ‘OK! Let’s do a film!’” Sparrow-Knapp said.

But what to choose for the transition from stage to screen? Sparrow-Knapp recognized that whatever she chose would need to be “worth it” — challenging, fun to perform and, ultimately, “cool.” It was the end of September and the village was headed into fall.

“Yellow Springs loves Halloween, so I wanted something spooky and creepy and interesting,” Sparrow-Knapp said.

Thus, Sparrow-Knapp decided to stick her neck out — so to speak — and take a chance with a filmed version of “Dracula,” a show she said she’s long wanted to stage.

The first challenge came in casting; while Sparrow-Knapp typically has a pool of several dozen students from which to choose, this year she had only 11 — mainly young theater diehards with whom she’s worked on other shows in recent years.

The second challenge came with these young actors, who have spent years learning how to speak and emote so that those sitting in the back of the auditorium can see and hear, reshaping their craft for the intimacy of film.

“The camera sees even more than the front row sees, so you can be subtle — you can do little things as opposed to big things,” Sparrow-Knapp said. 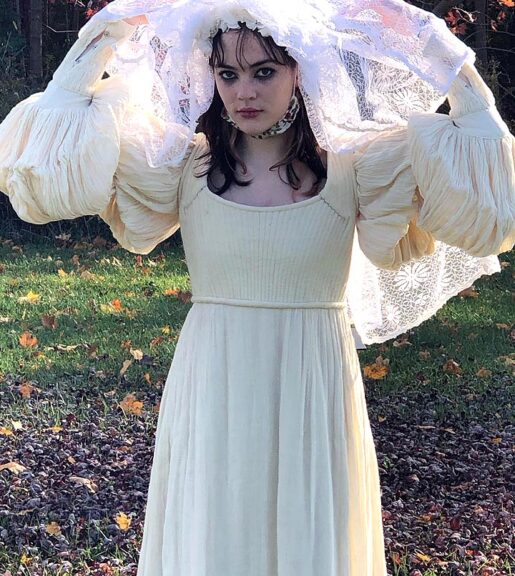 Olive Cooper plays Mina, whom the titular vampire relentlessly pursues in William McNulty’s adaptation of “Dracula,” aiming to make her his fourth bride. The filmed play will stream for Yellow Springs audiences in early January. (Submitted Photo by Lorrie Sparrow-Knapp)

The actors were given some workshop training in film versus theater, said Sparrow-Knapp, in order to prepare them for the work ahead. They also had to learn to perform scenes out of order, as is common in film, as opposed to the linear, beginning-to-end format they’re used to on stage.

“You really have to understand your character and the play in order to maintain that continuity — you have to remember where you were in the scene before and know where you’ll be in the scene after,” Sparrow-Knapp said.

Other elements of film, however, make things simpler for the young actors: they had to memorize their lines, of course, but acting on film means never fearing that one might forget a line on stage during a performance. As long as the camera’s there, there’s always another chance to get the scene just right.

Perhaps the biggest challenge of the whole experience was space: where and how to get a group of actors together in a way that facilitates good theater, but is also safe?

“If someone asked me, ‘What is your vision for doing “Dracula?”’ my answer would be, “My vision is that nobody in the cast gets COVID from doing it,” Sparrow-Knapp said.

As an actor and director outside of the schools, Sparrow-Knapp has a long history with outdoor theater: she worked with the outdoor drama “Blue Jacket” for many years, and, as artistic director of the YS Theater Company, has helmed outdoor productions of Shakespeare’s works each summer — except this last one — since 2016.

With that work behind her, and with the colder months approaching, Sparrow-Knapp leaped into gear to produce the filmed version of “Dracula” outdoors. She enlisted the aid of a fellow faculty member, Media Specialist Eli Hurwitz, to serve as assistant director and cinematographer.

“We decided we’d make sort of a Magritte ‘Dracula,’” Sparrow-Knapp said. She was referencing 20th-century surrealist artist René Magritte, whose paintings often featured objects out of their typical context — not unlike a set of Victorian parlor furniture in the middle of a Midwestern soccer field, as the set of “Dracula” turned out to be.

Adding to the surreal quality of the set of “Dracula” are the safety protocols: everyone must sign daily forms attesting that they have no symptoms, wear masks at all times unless filming a scene, and maintain at least six feet of distance. This makes for eerily sprawling, wide-shot scenes — though naturally, some camera magic is required to simulate the titular Dracula making prey out of his victims.

Despite using some cinematic tools, however, Sparrow-Knapp says that she and her students aren’t making a film, but a play.

“William McNulty’s adaptation, which we’re using, is not a screenplay — it’s a play,” she said. “We want to honor his script as best we can.”

To that end, the crew employed three static cameras to catch everything happening during scenes in wide shots, only using close shots when necessary.

Rehearsing and filming outdoors also put the cast and crew at the mercy of the elements, with  schedules fluctuating based on the weather. Capturing sound could also be difficult when it came to the wind. Likewise, running the production on a shoestring budget meant Hurwitz and Sparrow-Knapp couldn’t rig the kind of lighting they’d need to film at night, which is sort of the bread and butter of “Dracula.” This resulted in the cast and crew using the woods on school property near the soccer fields for some ambiance.

All of these challenges have thrown off the expected timetable for the project: it was meant to be finished and offered for local audiences to stream by mid-December, but will now likely be available to watch by Jan. 1. YS Schools will offer the streaming performance at only the cost of a $2.95 surcharge from the hosting site, BroadwayOnDemand.com. The performance will also include previously recorded work by McKinney Middle School students, including readings from Edgar Allen Poe and a piece written by student Kian Barker.

The experience has also opened up avenues for students to be involved in theater in untraditional ways: Sparrow-Knapp held a contest for McKinney students to design and submit a poster to accompany “Dracula” when it streams. All the submitted posters will be featured in one way or another, but the winning piece, by seventh-grader Evie Thomas, will take center stage. The school choir, which Sparrow-Knapp directs, used Soundtrap software to independently record parts for a performance of a song to accompany the film; Sparrow-Knapp took the individual recordings and combined them into one, so that the choir is singing together in the recording. It worked so well, she said, that she’s attempting to use the same method to record a whole choir concert.

“It might only be five songs, but you know what? That’s enough for a year like this,” she said.

Sparrow-Knapp said she’s impressed by, and proud of, her students, who have met each challenge thrown their way this year with aplomb.

“Their growth has been monumental, and if we come out of all this with a strong theater program and a strong, new film acting program, then we win,” she said. “We win the pandemic.”

“Dracula: Tales of Terror” will stream at BroadwayOnDemand.com soon; check page 2 of the YS News in coming issues for performance updates.