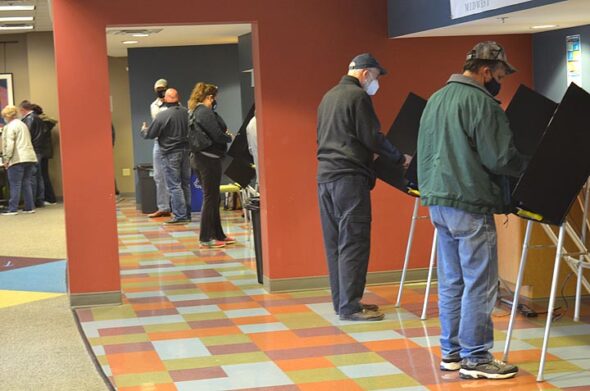 When the local polls opened at 6:30 a.m. on election day, a line had already formed outside of Antioch University Midwest. According to a poll worker, about 200 people voted in the first hour. Voters trickled in more slowly throughout the rest of the day. (Photo by Megan Bachman)

Greene County Board of Elections Director Llyn McCoy is hopeful that she won’t have to run another election during a pandemic.

But after this year’s primary and general elections went smoothly, she is confident that her office can do it again.

“I don’t want to do another one during a pandemic, but I know if we have to, we can do it,” McCoy said this week.

“I think by and large it went very well,” she added of the Nov. 3 general election, “and I think it’s going to go more smoothly next time.”

McCoy is currently overseeing the final steps to close out the 2020 general election, and looking for ways to make voting easier and safer in elections to come.

Next up is a routine audit of votes, beginning the week of Dec. 2. After every general election, 5% of the county’s votes are hand counted to look for any discrepancies, McCoy explained. That includes hand counting the tapes printed out from voting machines.

“It’s just to reassure ourselves that things are working the way they are supposed to,” she said.

Once the audit is certified, on Dec. 8, the election is over in Greene County.

Prior to the audit, the Ohio Secretary of State will certify the state’s election results on or before Nov. 28. The electoral college electors will meet in their respective states to cast their votes for president on Dec. 14.

But looking ahead to the next election, McCoy is identifying ways to improve the process. For one, the county should expect higher absentee voting moving forward, especially as the pandemic continues.

“I think people are going to continue to vote absentee by mail,” she said.

Village voters voted absentee at an even higher rate — 54%. A total of 1,577 local voters requested absentee ballots, and 1,439 returned them, out of 2,649 Yellow Springs voters who cast their ballots in the election. Another 492 voters, or 19%, voted early in person.

To accommodate the influx of ballot requests and ballots, the county contracted with an outside mailing service this year, which McCoy said her office plans to continue.

In addition, the board of elections improved the navigability of their website, with more changes planned to help voters find information on voting, McCoy said. And, at the request of the Ohio Secretary of State, they upgraded the security of their server.

“We had to move to a new host, because the server was not as secure as the Ohio Secretary of State needed,” she said.

That change also delayed the release of precinct results, which are typically available a few days after the election, McCoy said.

A total of 165 absentee ballots were rejected by the county this year. The most common reason a ballot was rejected was that the voter information on the envelope was incomplete (with name, address or birthdate not provided). The second most common was that the ballot was not signed. A few ballot envelopes arrived without any ballot inside them.

“That was strange,” McCoy said.

In-person early voting at the board of elections office was also up this year, McCoy noted. That, at times, meant long lines and wait times to vote.

“We regret that people had to wait in line, and we are looking to solve that problem,” she said.

Although some voters waited outside in cold and rainy weather, staying outside probably limited any spread of the virus, McCoy added.

By the next gubernatorial election, in 2022, McCoy hopes to have a larger in-person voting space in the county. Due to the limited space at its current site, and security considerations, she suggested that it was likely her office would need to contract another space for early in-person voting.

Finally, election day voting went smoothly, McCoy said. There was no shortage of poll workers to help in the process, as many in the state had worried.

“Our poll workers did a fantastic job,” she said.

One hiccup: at a precinct in Bellbrook, the voting machines were not working at the start of voting. The county fixed the problem within a few hours. The machines had not been set to “election mode,” a problem discovered after one machine was brought back to the county office for inspection. While the issue was being fixed, voters cast paper ballots.

“No voter was turned away because of that,” McCoy said.

A total of 472 of the 1,791 provisional ballots cast in the county were rejected, according to the county elections website. The most common reason was that the voter is not registered anywhere in the state, McCoy noted.

In Yellow Springs, a long line when the polls opened gave way to a trickle of voters throughout the day, as three-quarters of local residents who voted did so early or absentee. Overall, local turnout was 80%, higher than the county average of 75%.

“We had a big turnout, but most of that was prior to the election,” McCoy said.

“I hope everyone stayed safe,” she added of voting this year.

In Yellow Springs, 2,649 voters cast their ballots, out of a total of 3,309 registered voters, for a turnout of 80%. That was lower than at the 2018 midterms, when 86% of local registered voters cast ballots. But it was higher than the last presidential election in 2016, when 76% voted. Precinct 443, the south side of town, had the highest turnout this year, at 87%.

Turnout in the village was higher than turnout in the county (75%) and state (72%, according to initial estimates).

By nearly a 3–1 margin, village residents passed Issue 5, an 8.4-mill municipal property tax levy, for five more years. In official results, 1,808 local voters cast ballots in favor of the levy, and 729 voted against it, a spread of 71–29%. It was most popular in the center and south side of town, and least popular on the north and west sides of town.

YS backs Biden, by a lot

The nation went for Biden as well; he won the electoral college vote, with 306 electors to Trump’s 232, according to preliminary results. Biden also won the popular vote, by around six million votes. Trump has yet to concede the victory to his opponent, but this week government agencies began the presidential transition.

Biden’s margin of victory was much narrower in Miami Township. Biden amassed 491 votes there to Trump’s 390, taking 55% of the vote.

Third-party candidates Jo Jorgensen, a libertarian, and Howie Hawkins, a socialist, only took a handful of votes in the village and township.

More villagers voted for Trump this year than in 2016, when 178 cast their ballot for the Republican. Biden got 191 more votes than Hillary Clinton did four years ago. Clinton, by contrast, garnered 88% of the local vote.

Tims gets 90% of local vote

In a hard-fought race for U.S. House District 10, longtime incumbent Republican Mike Turner defeated Democratic challenger Desiree Tims by a districtwide margin of 59% to 42%. Here, Tims won 90% of the village vote. She got 2,363 votes in the village — slightly less than the number who voted for Biden — to Turner’s 254.

In her second bid for a seat in the Ohio House, Democrat Kim McCarthy lost to Republican Brian Lampton, 58–42%. However, she won the village with 92% of the vote. The open seat was formerly held by Republican Rick Perales, who reached his term limit.

Incumbent Republican Bob Hackett defeated Democratic challenger Charles Ballard for State Senate District 10 by a districtwide margin of 64% to 36%. But Ballard garnered 91% of the vote in Yellow Springs.

Republican Rick Perales was returned to the Greene County Commission after several years holding state office. Perales, the former state representative for Ohio District 73, defeated Democrat Colin Morrow, a Fairborn city councilman, by a margin of 65–35%. Perales, however, lost the village by a 9–1 margin.

Local candidates Dr. Steve Bujenovic, who ran for coroner, and Mark Babb, who ran for probate judge, both lost their races for countywide office. However, both did well in their hometown.

Bujenovic, a Democrat, lost to incumbent coroner Dr. Kevin Sharrett, a Republican, by a margin of 66–34%. However, he won the village with 90% of the vote.

Babb, a longtime Yellow Springs resident and criminal defense attorney, failed to unseat incumbent Republican Thomas O’Diam as a judge in the probate division of the Greene County Court of Common Pleas. The final vote was 61–39%. Babb won 89% of the village vote, as well as both Miami Township precincts, even Precinct 455, which tends to vote Republican. Babb ran as an Independent.

While two thirds of county voters approved a 0.8-mill, five-year property tax levy in support of the operations of Greene County Public Health, 87% of villagers did.