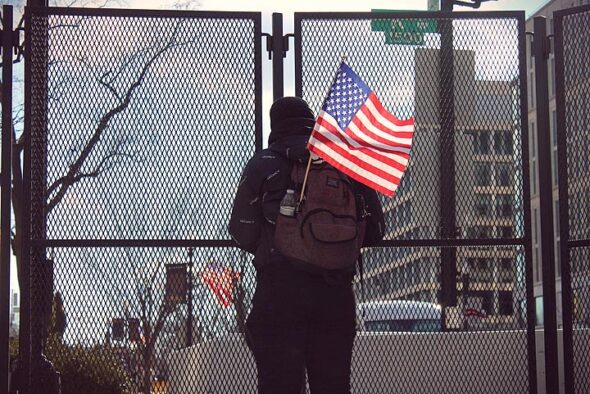 An onlooker tried to catch a glimpse of the inauguration through a heavy security fence, military police and vehicles. From that vantage point, the back of the White House coud be seen, but the inauguration was on the other side. (Photo by Max Miesse)

The bridges were closed, the storefronts were boarded up, and the streets were barricaded. Washington, D.C., had been turned into an urban fortress.

As more than 20,000 National Guardsmen flocked into the nation’s capital in preparation for Inauguration Day, the city was locked down in an unprecedented way, the troops part of the largest security presence at any inauguration in American history and the largest National Guard presence in any American city since the Civil War.

The official website of the inauguration ceremony for incoming President Joe Biden encouraged citizens to view the event online and at home, and Muriel Bowser, the Mayor of D.C., had put pressure on area hotels and Airbnbs not to host any guests in the days leading up to the ceremony.

The National Mall had been completely closed down and the troops formed an impregnable, citywide barrier between the people and Capitol Hill. The message was clear: stay away from D.C.

News of my planned excursion to Washington, D.C., was met with trepidation from friends and family. Everyone I talked to warned me to be extremely cautious, to be incredibly careful, some even calling it a death wish.

“This isn’t gonna be safe, it’s not gonna be clean, it’s probably gonna be one of the most dangerous events to happen this year,” one friend cautioned, “There’s gonna be, at least, rioting and open hostilities in the streets.”

All this fear and uncertainty was a culmination of a pandemic-weary country divided and brought to a tipping point in the aftermath of an until-then unfathomable attack against the Capitol building, Congress, and American democracy. The country was swimming in murky, uncharted waters, and nobody knew what to expect in the coming days, including me.

I arrived in D.C. on the 19th, one day before the inauguration. I spent the long drive preparing myself for whatever I might encounter. But as I made my way to the heart of the city on Tuesday night, I was met with a haunting scene I could never have anticipated. 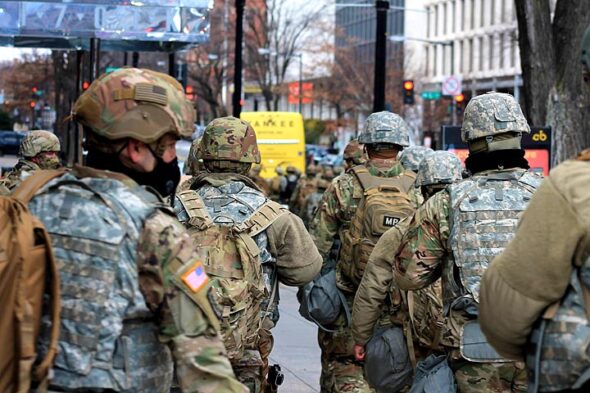 The city was bathed in red and blue lights emanating from the endless rows of law enforcement vehicles parked along innumerable cement barricades and security tents. The thousands of National Guardsmen, armored up and battle ready, shuffled in and out of checkpoints around the city gearing up for the next day. Parking garages and metro stations were locked and chained, and the buildings were covered in a cold layer of plywood. But what struck me the most about the setting was the empty silence. There were lights but no sirens, and the typically bustling streets of downtown D.C. were blocked off and completely devoid of cars. There were no large crowds, no angry protestors, no megaphones or picket signs, just myself and a few other pedestrians, wandering the streets and taking in the completely transformed city, wondering what the next day would bring.

When approaching the city the following morning, it was clear that the light of day brought with it some changes. I parked roughly a mile from downtown D.C., and even out there I found a significant security presence. In addition to the ranks of the National Guardsmen were the D.C. police, U.S. Border Patrol, Secret Service, and even TSA agents. Unmarked vans with service men and women in the front seats were scattered across the city, and everywhere I went I felt I was being watched, my movements closely followed.

Upon returning to the downtown area, I noted that the security checkpoints from last night had been moved up a few blocks, and they were more thorough as well. Moving into the foot traffic-only areas was similar to passing through an airport. All bags were to be emptied, along with pockets, and large coats had to be removed. Masks stayed on, of course. Before even reaching these points there were notices that featured extensive lists of prohibited items from bicycles to umbrellas to dogs.

As I got closer and closer to the White House, I was listening for chanting, waiting to turn a corner to find an impromptu rally or a protest, or worse, a standoff. But as I drifted along the streets of D.C., increasingly I started to feel almost alone. The protestors, the insurrectionists, the people hoping to “stop the steal” of the 2020 Presidential election, had all vanished. Throughout my stay in Washington, I counted exactly five people with some form of Donald Trump memorabilia. I talked to some residents of the city, and they were a bit puzzled too.

“After the sixth, all that madness, it’s like they just disappeared,” D.C. resident Julie Curtis told me. “I guess they heard about the soldiers coming in and didn’t want any more trouble.”

Whether a coincidence or not, the tension and fear from the days leading to the inauguration seemed to have disappeared as well. I met a pair of students from George Washington University, and they told me a relatable story of friends and family members fearing for their safety. 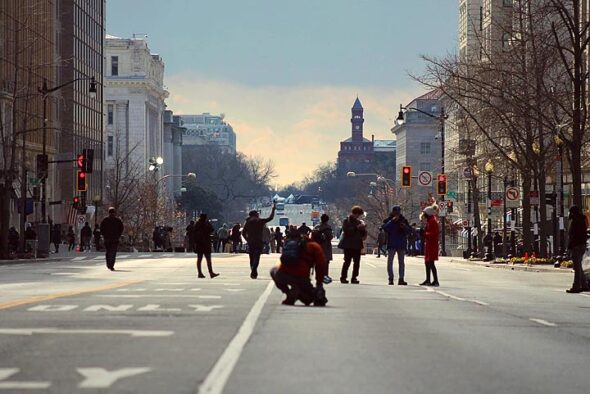 media members and citizens wandered through the locked-down city between 14th and F Streets, just a block away from the White House, but still 14 blocks away from the Captiol. (Photo by Max Miesse)

One of them told me, “My mom was calling me constantly to see if I was safe, and I was starting to get nervous too, and now I’m here and there’s basically nothing going on.” He was right about that. At least in comparison to all the buildup and worrisome expectations, there really was nothing going on. The feeling was quite odd, all agreed.

“It’s kind of like going upstairs and thinking there’s one more step and there isn’t,” another student added.

Despite the serious tone of the sturdy black fencing and the M4s hanging from their shoulders, even the National Guard service men and women were in an incongruously agreeable mood. Sergeant Pretz of Pennsylvania said his time in the Capitol had “actually been pretty enjoyable.” He talked about how it’s of course difficult to know what to expect, but when asked if he had any worries or fears about the inauguration, he laughed and said, “Just staying warm.”

It should be noted that for each of the 20,000 some troops in the city, there seemed to be an accompanying media member, yours truly included. Press passes were out in spades. I saw several dozen people holding microphones rattling off newscasts in various languages and more than a handful of cameras that were probably worth more than my car.

One photographer I crossed paths with was a man named Scott Heins. He came down from New York and had been in the city during the Capitol riots on Jan. 6. He was putting together a documentary about the events and the atmosphere around the city. Heins said he’d been in D.C. for past presidential events, including inaugurations and election nights, and said that the heightened security and “the whole feel of the city” was unlike anything he’d ever seen before.

“It’s definitely crazy, especially the lack of people out and about,” Heins said.

The barricades throughout the city meant that for all reasonable purposes, Capitol Hill was as far away as if I had stayed in Ohio. Through the dark fences and security, I could just make out the back of the White House, but the ceremony itself was kept out of sight. That meant that many of the people throughout the city were watching the inauguration on their phones, and the moment that Biden was officially sworn in brought a series of whoops and hollers from the scattered crowds. That was the most noise encountered all day.

The typical fanfare of an Inauguration Day was almost entirely absent.The Presidential Parade had been canceled, there was no dancing in the streets, or giant celebrations under the midday January sun. I talked to Mark Ross from California, who was selling inauguration T-shirts, hats, pins and other memorabilia, and he furthered the notion that this inauguration was unlike any other.

“This is my livelihood man, I’m selling gear for all kinds of things — NFL playoffs, inaugurations, elections, you name it — but I’ve never seen anything like this,” Ross said.

Ross told me that all the security had seriously impacted his sales but ultimately he was glad they were there.

“You know, I think they went overboard with the troops and the fences and all, but I’m glad they did,” he said. “It’s peace of mind, you know.”

In talking with the people in and around the city, this was a common theme. The peace of mind provided by the security was perhaps worth the cost of foregoing a traditional inauguration.

The security was near omnipresent, the crowds and celebrations were near nonexistent, but it was not all misery in the capital city. Instead there was something of a weighted hope, or a cautious optimism.The atmosphere Wednesday felt like that of a country ready to turn the next page, find a fresh start.

The locked down, view-from-afar inauguration in our nation’s capital felt to me like an exercise in perseverance. As I wandered down Pennsylvania Avenue and the surrounding streets, I wasn’t able to find many flags bearing any candidate’s name. What I did see plenty of though, was the American flag. In every direction I turned was the Stars and Stripes waving, and people, through their masks and through their fear, taking it in.

*The writer is a freelance reporter for the News based in Springfield. He can be reached at miesse99@gmail.com.

One Response to “One reporter’s view— Security dominates 2021 inauguration”