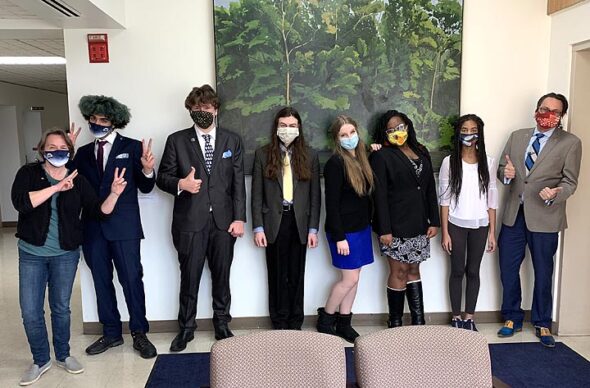 Whether sharing their own thoughts, presenting the words of another or arguing both sides of an issue, members of the Yellow Springs Speech & Debate team say they are finding power in their personal voices.

Now in its fourth year, the small but mighty team currently has a core membership of seven participants, three in high school and four in middle school. And despite its small size, the group has been earning high marks in competitions against larger and more established area teams such as Oakwood and powerhouse Mason, which typically has up to 80 participants in a year.

Yellow Springs eighth-grader Gini Meekin may have the best record this season, with 10 middle-school competition first-place finishes in a row (so far) in her chosen category of Original Oratory.

Gini’s speech weaves together such current topics as Black Lives Matter, the COVID-19 pandemic and recent political unrest, and examines them from a young person’s perspective.

“It’s about how children have a voice, too,” she said in a recent telephone call, with her parents, Nan and Kirk Meekin, sharing the line. “Some — usually a lot — of adults don’t listen [to young people], but we are actually very engaged in what is going on around us,” she said.

Gini, 13, said her essay began to take shape in her mind after discussions with her peers about “how people who are young should be able to vote.” The discussion was spurred by Village leaders’ attempt to lower the local voting age to 16 and its ultimate rejection when it was put on the ballot last spring.

She said Speech & Debate participation has provided an avenue for refining and expressing her thoughts.

But effective speaking involves more than recitation, she added. How you hold and move your body are important, as is vocal quality. Voice projection — speaking up — has been an area she’s had to work on since first exploring the activity as a fifth grader, she said. Now, in her fourth year with the team, projection feels more comfortable and comes more naturally.

Positive feedback and constructive criticism keeps her working, too.

“A lot of people have said I have a voice and I have a gift,” she said. “It’s very much raised my self-esteem,” she added.

Nevertheless, she still gets nervous, “all the time,” before giving a speech, she said. But she’s found that “you have to push through it.” And experience has shown her that once she gets started speaking, the nervousness falls away, and she enjoys her time in the spotlight.

Typically, she finishes thinking, “I want to do that again.”

Team coaches Brian Housh and Cindy Sieck both said in separate phone calls that they also have seen each student’s confidence grow over time.

The students “have more ease and poise being up front,” Sieck said. Sieck, who’s fairly new to Speech & Debate, got involved with the team — first as a volunteer and judge and then as assistant coach — after her children joined during its inaugural season four years ago.

She said her daughter, Jorie, now a college junior, found the experience helpful as a young woman learning how to assert herself in situations still dominated by male privilege.

Her son, Galen, now a high school senior, has continued to develop his skills, researching and exploring all aspects of a debate topic in order to speak authoritatively from either side.

The most recent topic has been “lethal autonomous weapons,” also called “killer robots,” Housh said. The question participants argue is whether such weapons should be banned, he said. It raises such issues as whether artificial intelligence devices “always need human control.”

“So that’s an interesting one-on-one,” he said.

Housh said that until this year, Yellow Springs High School participants had focused on the debate side of competition, while the middle school team members explored the speech categories. It wasn’t by design, just how interests fell.

This year, however, two new high schoolers, both juniors, have joined the team, and are presenting original speeches.

Joaquin Espinosa, one of the newcomers, has written a speech about political divisiveness.

While he didn’t know what to expect, his first few meetings with the team “were super fun.” Joaquin said he appreciated that while the team is small, it’s also “very diverse.” He also found everyone to be supportive, which helped as he prepared for his first tournament.

“It was really intimidating,” he said of that first foray into competition. But like Gini, he soon learned that the hardest part was the anticipation, and that once he started, his nerves settled.

“You get into the zone, and before you know it, your 10 minutes is up.”

Joaquin said the experience has been a confidence builder that has led him to take on more leadership roles in the school and community. He’s joined the student review board at the high school and become part of the new youth leadership group sponsored by the Yellow Springs Community Foundation. He said he also finds himself taking more leadership in school group projects.

His only disappointment has been that this year’s competitions have all been virtual, so he’s not yet had the experience of an in-person tournament. He said he looks forward to the chance to interact with participants from other schools, whom he’s only watched online.

“Every speech has something interesting I want to talk to them about,” he said.

Eighth-grader Payton Horton, who like Gini, attended her first tournament in fifth grade, said she misses the in-person competitions.

“I make friends with my competitors,” she said. “We help each other out. We talk, we laugh. … The problem with [virtual events], you can’t really make friends with anyone. You can’t socialize. I want to say, ‘I liked your speech.’”

Payton said she is inspired by every participant, whether they’re “nervous or 100% confident.”

Payton competes in a category called “Declamation.” It involves memorizing and presenting a five- to 10-minute speech that already exists. The participants may take out words to keep their presentation within the time limit, but they can’t revise them. As a sixth grader, in her first full year of competition, she took third place at the state level in her category.

Payton’s speech this year examines the notion of perfection.

“It’s about how we need to realize that nothing’s really perfect in this world,” she said.

The theme has special resonance for her this year when school and daily life have been turned upside down by the ongoing pandemic.

She said she also connects with it on a deeper personal level. Describing herself as dyslexic, Payton said that while she was drawn to participating on the Speech & Debate team in elementary school, she didn’t think she could do it.

“I really doubted myself,” she said. But then-assistant coach Jackie Anderson gave her the encouragement to try, and then to keep going.

“I learned that just because I’m dyslexic doesn’t mean I can’t memorize and speak,” Payton said. “Speech & Debate is so inspiring. It shows so much how you can improve in life. It’s my happy place.”

The next competition, this coming weekend, is the qualifying event for advancing to state finals. Housh anticipates that Yellow Springs team members will do well, and that national competition will follow.

“It’s exciting,” he said, of witnessing the students’ continuing successes in competition and finding their personal voices.

One Response to “YS Speech & Debate— Students find their voice”