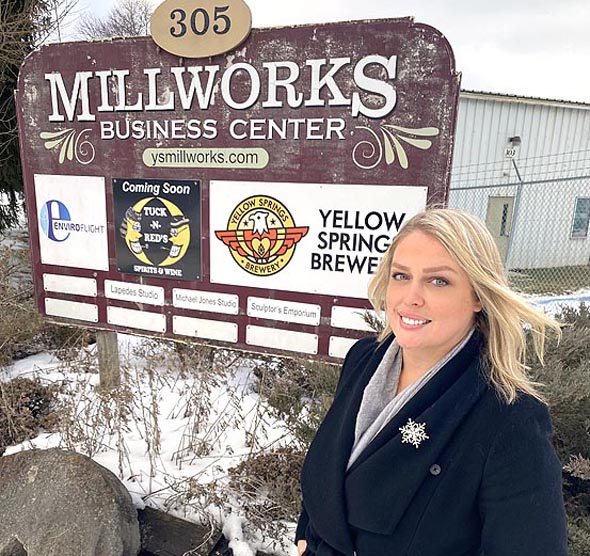 Villager and Dayton area commercial realtor Allison Moody purchased the Millworks industrial park on Monday, Feb. 22. Moody, who bought the property as a member of a family investment company and will be the property manager, said she wants to improve the four-acre site in the near future by paving the parking lot, adding colorful paint to the exterior and upgrading bathrooms. (Submitted photo by Heather Horton)

At 3 p.m. on Monday, Feb. 22, Allison Moody’s company closed on its purchase of the Millworks business center. By Tuesday morning, its muddy parking lot had a fresh coat of gravel.

“It needed to be done,” Moody said this week. “It was a mess back there.”

Moody is the newest owner of Millworks, a four-acre industrial park at 305 N. Walnut St. The purchase price was $1.5 million.

A commercial realtor who lives in Yellow Springs, Moody is looking forward to improving the property to meet the needs of its nine commercial tenants.

“I look forward to being a calm and steady support to these businesses,” she said. “I’m not making any changes except improving the actual property.”

Moody said she was drawn to Millworks because of its historical importance to the town, first as an early, 19th century cannery along the railroad and later as the longtime home of DeWine-Hamma Seed Company.

Moody purchased Millworks from Jessica Yamamoto and Antonio Molina, who bought the park in 2018 for $1.15 million. It was listed last year after their plans for the property, which included a hostel and artist studio lofts, didn’t come to fruition.

Moody will manage the property as part of her family’s company, APR investments, a joint venture between herself, her brother, Paul Moody, and her father, Richard Moody, both of whom reside in Washington Township. While it’s their first property purchase in Yellow Springs, the company owns another 500,000 square feet of industrial/flex space and four self-storage facilities in the Dayton area.

In fact, the family has a long history of owning and managing commercial real estate in the region. Moody is also a broker for Dayton Commercial Realty, a family company started by her father, and she is involved in another investment company that evolved out of a concrete business originally started by her grandfather in 1949.

“They started doing curb cuts and sidewalks and got into commercial investing,” Moody explained of that firm. “They owned bowling alleys, nursing homes, shopping centers and office buildings.”

The 36-year-old grew up in nearby Centerville and moved to the village in 2011.

“I always spent a lot of time in Yellow Springs — hiking in the Glen and rollerblading on the bike trail,” she said.

In recent years, Moody has watched with interest the changes at Millworks, including the opening of Yellow Springs Brewery in 2013 and the arrival of two new tenants that have yet to open their doors: Tuck ‘N’ Reds distillery and Yellow Springs Baking Company.

“I’ve seen how the space has evolved and transformed to fit our town better now,” she said.

“My top priority is to improve the property and to help the existing tenants be successful,” she said. “I’m not here to force anybody out. The opposite — I’m going to do everything in my power to encourage the current tenants to stay.”

Moody has reached out to all the tenants, including EnviroFlight, whose current lease ends at the end of 2022. EnviroFlight’s future in the village has been up in the air ever since the company’s lease was originally not extended after Yamamoto and Molina purchased the industrial park.

Moody, however, is open to further extending their lease, or finding other ways to accommodate the homegrown company that produces animal feed from Black soldier fly larvae.

“I told them that I value them as tenants and would like to discuss options for them to stay,” Moody said. “They have 20 full-time jobs, which is huge for a town of our size.”

Although only three acres of the property were listed for sale, Moody insisted on purchasing all four acres, including a one-acre parcel at the north end that includes some vacant land.

“It gives us flexibility for the existing tenants if one needs to expand,” she said. “It gives us options.”

With the parking lot re-graveled, Moody is looking ahead to other upgrades, including painting the exterior, renovating common bathrooms and hallways and paving the parking lot, which, she said, would make the property more accessible, especially to differently abled people. She’s also hoping to work with local artists to add murals to the property so it will “look more like Yellow Springs.”

“When you’re coming south on the bike trail, they are the first buildings you see in Yellow Springs, so we want to make a good first impression,” she said.