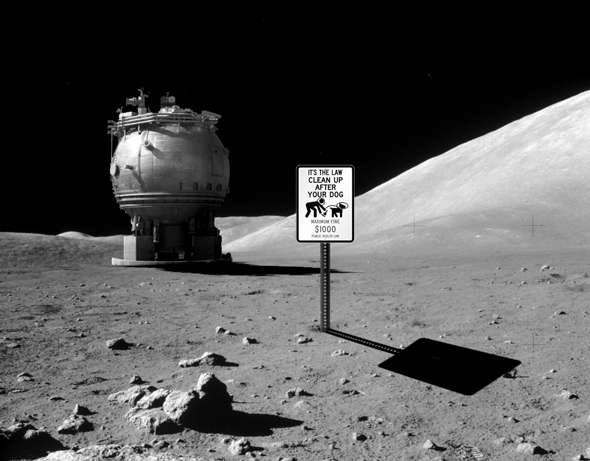 In the fall of 2065, villagers will finally agree on a dog park location, near Copernicus crater on the lunar surface. Opponents will be satisfied with the fact that “in space, no one can hear you bark.” Also, poop freeze-dries almost instantly.

News from the Future

Letterman expands business. The village’s other favorite Dave will open his beard care business on Xenia Avenue in 2029 after moving to Yellow Springs. Two years later, he will expand the business to include moustache care and move the operation to LetterWorks, formerly MillWorks.

The implosion of the Yoga Industrial Complex. “It turns out that 75 yoga studios was too many for a town of 5,000. So ends a period of downward facing dogfights, third-eye blindings and kundalini snake bites.”

The Snooze will report that “the town failed to guard against the acquisition of unwarranted influence of the yogis and yoginis, whether sought or unsought.”

Beatty-Hughes parking lot slated. Council will unveil plans to raze Beatty-Hughes Park after a lost addendum is found to the last will and testament of William Mills, indicating his intention that the land be turned into a parking lot.

In other Council news: several villagers will speak with concern about spotting unexplained lights in the sky at night over their homes.

Snooze wins top newspaper award for 61st year in a row. Though it will run unopposed in its division for the 22nd year since the dissolution of the only other independent, weekly newspaper in the state, the Snooze will, nonetheless, be proud to accept the award. The Snooze will be especially lauded for its in-depth reporting on a series of sightings of strange, otherworldly aircraft across the Miami Valley.

Downtown teleport hubs jammed; travelers stuck. Borrowing technology from our intergalactic neighbors, the popularization of travel by teleportation will ultimately solve the issue of limited parking in downtown Yellow Springs. However, the village will face a new challenge: the limited capacity of downtown teleport hubs. When thousands attempt to teleport into town for a Town/Gown/Mars Chautauqua, the influx will cause a hub back-up that will leave travelers suspended mid-teleport for days.

One Response to “News from the Future”