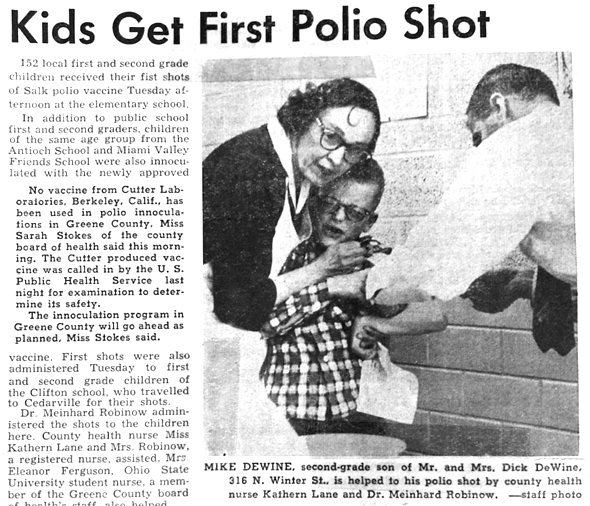 News from the Past: Gov. DeWine’s first vaccine

In late February, Gov. Mike DeWine and his wife, Fran DeWine, received their second doses of the Pfizer vaccine when their age group of 70 and older became eligible for the vaccine.

While digging through the archives, Yellow Springs News production team recently uncovered a photo of DeWine receiving his polio vaccine in 1955. The cutline indicates DeWine was in second grade at the time of the photo.

Despite Gov. DeWine’s current positive attitude towards vaccinations, he appears to have had a different opinion when the photo was taken.

The photo appeared alongside an article in the April 28, 1955 issue of the News. The full article read:

Mrs. Leo Hughes and Mrs. William Marshall were PTA mothers who helped staff the medical room at the elementary school as the youngsters lined up for the inoculation shots.

Most of the kids were scared Tuesday, but brave and determined not to cry. 20-30 children received their treatment before one small girl broke down from the tension and shed tears as her turn approached.

Gary Lee Arnett, son of Mr. and Mrs. Guy Arnett, Shawnee Drive, was the first local child to receive the vaccine. Like those who immediately followed him, he is a pupil in the second grade class taught by Miss Betty Felders.

A second shot will be given at the local school Tuesday, May 17. The Greene County Board of Health plans administering a third shot in December or January to those children who have received the two-shot series.

Vaccination was entirely voluntary. Parents here desiring vaccine protection for their children were requited to fill out consent blanks.

Topics: Ohio Department of Health, Mike DeWine, news from the past