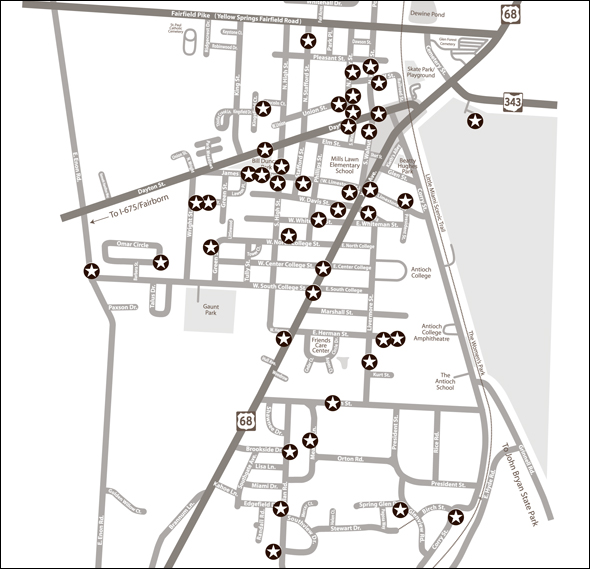 A Village map shows 43 active transient guest lodging locations across town, including five commercial hotels/B&Bs, with the remaining Airbnbs for short-term stays. Both Council and Planning Commission are considering restrictions to Airbnbs to limit their number in a single neighborhood and to deter non-owner occupied establishments. (Data: Village of Yellow Springs)

At its regular meeting Monday, April 5, Council considered legislation that imposes new fees, requirements and potential penalties for those renting out their rooms, apartments or homes for short-term stays.

Although Planning Commission is separately considering steps to slow the proliferation of some types of transient guest lodging establishments, or TGLs, Council took the steps as part of its taxing authority.

Council’s goal is specifically to deter new TGLs that are run by those who do not live on the property, Council members stated.

The move comes after Council members raised concerns that TGLs may negatively impact neighborhood cohesion, reduce the availability of long-term rentals, attract outside investors with no local ties and drive up real estate prices.

At the meeting, Council Vice President Marianne MacQueen shared her worries about the effect of non-owner occupied TGLs on affordable housing.

“I would like to state emphatically that I think this could be a very serious problem because of our values [and] because of our need to house people who live here or want to live here,” MacQueen said.

MacQueen added that she hopes Planning Commission also looks at how the zoning code could be strengthened to deter Airbnbs where people don’t live.

“That is what kills a neighborhood, I think,” MacQueen said.

There are currently 48 TGLs in the village, 13 of which are non-owner occupied, according to a Village presentation. Five of those are commercial establishments (Mills Park Hotel, two Jailhouse Suites locations, Morgan House B&B and Glen Helen Outdoor Education Center).

Last month alone, Planning Commission granted two new permits for TGLs where the owner did not live at the property.

According to the draft legislation, those wanting to run an Airbnb would have to receive a certificate to operate from the Village and pay an annual fee. The fee is $100 for those running a hotel or bed and breakfast, or who operate their TGL where they live, but jumps to $500 for those who live elsewhere.

The legislation also steps up enforcement mechanisms for TGLs that run afoul of local regulations. It imposes penalties on those who don’t pay the Village’s lodging tax, who discriminate against renters or commit other violations. Those individuals may be fined, cited, have their identity shared publicly or have their permit revoked.

There are currently eight local TGL operators who have never reported income, including five that are “active permits,” according to Village Manager Josué Salmerón, who said “fines and citations are forthcoming.”

With the finance director and YS Police Chief, Salmerón is “working on pursuing actions on those individuals,” he added. The Village has already subpoenaed evidence from Airbnb and other sources, he said.

It was the first reading of the legislation. A second reading and public hearing is scheduled for the next Council meeting on April 19.

New TGL operators already have to apply for a conditional use permit and appear before Planning Commission before they open, among other steps. Those measures were added in mid-2019, and did slow the growth of TGLs in town, Village Planning and Zoning Coordinator Denise Swinger reported.

During the discussion, Council members asked numerous questions of Village Solicitor Breanne Parcels about which restrictions would be legally possible.

For instance, Parcels argued that the Village cannot ban all TGLs run by someone who does not live at the property, as that could be considered a constitutional violation for “de facto taking.”

“You would probably be drawing a constitutional lawsuit,” Parcels said. However, she added, the Village can “disincentivize” such rentals rather than disallow them, in part through higher fees.

Council President Brian Housh said he wanted “to look at all strategies that will pass legal muster.”

Not discussed was banning new TGLs entirely, as some residents rent out rooms or apartments at their property in order to afford to live here, Council members explained.

Parcels also summarized the detrimental impact that TGLs can have on local real estate.

“The affordability issue that has come up is a property owner can make more money renting out their property short-term versus to a long-term tenant,” she explained. “That would take it out of the rental market, driving up prices for the long-term rental market.”

The issue of short-term rentals came to the fore in 2017, when the Village passed a 3% lodging tax on all stays, whether at an official hotel or residential guest house/room. At that time, TGLs were changed in the zoning code from a conditional to a permitted use.

Planning Commission is also wrestling with TGL concerns, and later this month the body will begin discussing new changes to the zoning code for Council to consider.

The issues arose as the commission considered two new conditional use applications for TGLs at its March 9 regular meeting.

In one case, a couple who lives part-time in the village were seeking a second TGL for their duplex at 131 W. North College St. Mark Davenport of Columbus and Huan Li of Centerville already run a TGL in a second apartment at the property. They used to rent out the other apartment to a long-term tenant, until the tenant’s passing, Davenport explained.

Planning Commission member Matthew Kirk said he was concerned about approving the permit, pointing out that while some TGLs are “additive,” this one was “detracting from the existing housing stock,” by removing an existing long-term rental unit.

“It’s hard to see how if we approve something like this, what kind of precedent we are setting,” he said. “Next month we could have five people who are existing landlords say, ‘I don’t want to rent out long term anymore.’”

Davenport said he and Li applied for a second TGL because the first one was so popular, it was always booked, and they wanted to spend more time in town by staying in the second.

“We do view it as our second home,” he said, adding, “We love Yellow Springs.”

The commission went on to weigh how, or even whether, it could deny the permit based on the fact that the property was not the owner’s primary residence.

But Solicitor Parcels told them they could not.

“You have to apply the code as it stands,” she said. “Council has expressed a trend toward not allowing non-owner occupied households, but as the code stands now, there is nothing restricting or prohibiting that.”

Parcels added that there could be “grounds for denial” but did not specify what those might be.

An earlier motion to table the matter by Council member Laura Curliss, Council’s liaison to Planning Commission, did not pass after a 2–2 vote. Curliss said she wanted to delay the matter until after Council considered new legislation regarding TGLs.

Curliss argued that “the spirit of allowing TGLs” was so village residents could make some extra money due to the town’s high taxes, but that in this case, it’s more like a business, and harms neighborhood cohesion.

“This community tries really hard and puts a lot of resources into trying to create housing for folks to actually live here full-time, whether that’s rental or owner-
occupied,” she said.

“No one even locally right there in the neighborhood knows who is coming in and out if there is a problem,” she said.

But Planning Commission Chair Frank Doden and member Steven Green voted against the motion to table. Kirk had earlier recused himself because he runs a TGL at a property he owns in the village. The conditional use later passed in a 3–1 vote, with only Curliss dissenting.

At the same meeting, Planning Commission approved another non-owner occupied TGL. Danyel Mershon, who owns Wildflower Boutique downtown, applied for a TGL at her property at 104 W. Limestone St., her former home.

The entire house, which has four to five bedrooms, will be rented out with a minimum three-night stay for up to 10 guests, and might be ideal for yoga retreats and other groups, Mershon said. She added that she plans to live there part-time, and that the village is her primary residence.

Planning Commission members were more sympathetic to Mershon’s application, as the house is located at the edge of the central business district and directly between the local hotel and the Morgan House B&B, and would likely not be an affordable option if it were put up for sale, they said. The final vote was 4–0.

Potential conflicts of interest were part of the discussions of TGLs at both Council and Planning Commission.

At the March meeting, Planning Commission member Kirk recused himself from the discussion and vote after Solicitor Parcels advised him to do so, since he runs a TGL. Parcels said that Kirk could benefit from denying a permit to a potential competitor.

“As far as a potential competitor, he would recuse,” Parcels said.

But Curliss did not recuse herself from discussions at either Planning Commission or Council. Curliss disclosed that she does have a TGL permit at her property, but said she did not have any immediate intentions of renting out the apartment for short-term stays.

Curliss said it does not constitute a conflict “just because I own a non-functioning rental permit, that I am making no money on it, that I may use it as a TGL.” She added that her reading of Ohio law was that a conflict arose when there was a “direct pecuniary gain” not gain that is “speculative” or “indirect and remote.”

Parcels, however, disagreed with Curliss’ interpretation.

“If you have a TGL or have a property that qualifies as a TGL, anything you do that could adversely affect a competitor due to the narrowing of the market” is a conflict, she said.

Council member MacQueen formerly ran a TGL at her property, but no longer does so, she confirmed in an email to the News this week.

Other items from Council’s April 6 meeting will be in next week’s News.