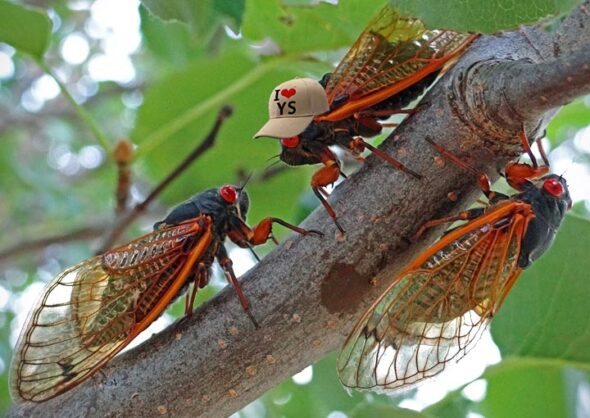 The Village is preparing for its largest onslaught of visitors since 2004, about two billion or so of of them. (Photo by Kat E. Piller)

Anticipating a new breed of tourist, this week village officials and businesses prepared plans geared toward an arriving swarm of arthropods.

For members of Magicicada septendecim, Yellow Springs is the perfect destination for their four- to six-week freelove fest that comes once every 17 years.

Meanwhile, villagers are bending over backwards to accommodate the cicadidae nymphs.

“Yellow Springs is a welcoming community,” YS Chamber Director Nat Longwing said this week. “We want to send the message that no matter what gender, ethnicity — or phylum — you are, you can be yourself here.”

Members of Brood X are expected to come up in early May and even now several organizations are gearing up to serve them.

Yellow Springs Brewery will set up a micro-microbrewery serving Captain Xylem, a locally crafted beverage made of tree sap.

The Community Band has invited the insects to join in their Spring Concert in a tymbals section.

Agraria has scheduled an educational event to encourage the critters to choose their superior, biodiverse soil for their descendants.

While nearby towns scrambled to pass legislation to keep the so-called invaders out, Village Council unanimously approved an ordinance to become a “sanctuary city” for the bugs. As a result, local police will not cooperate with agents from ICE — Insect & Creepy-Crawly Extermination.

As resident Katy Deed sees it, cicadas and villagers are kindred spirits.

“They’re actually just like us,” Deed said. “They’re vegetarians. They’re vocal. But they also like to lay low sometimes.”

“I mean, we’re all members of the animal kingdom,” Deed added. Plus, she said, if the sunlight hits them just right, cicada wings appear to shimmer like rainbows.

In other local preparations, the YS Arts Council Gallery has put out a call for submissions for Exo-bition ’21, which will feature creative uses of vacated cicada shells, or nymphs.

Mayor Pam will be available to perform cicada marriage ceremonies for insect couples.

And Antioch College’s annual Sex Week will include a workshop on stigma-free sexploration for consenting imagoes.

Phil Belker of the Yellow Springs Almanac is preparing to document every moment for posterity. The Cicada Deafening Moon is set to rise over Glen Helen in the evening.